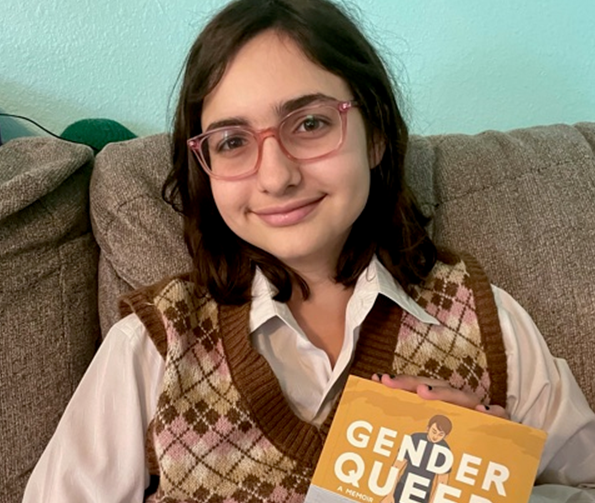 “Gender Queer: A Memoir” has been pulled from the shelves of Orange County Public School libraries and others across the country. School leaders say the book, which tells the story of a young queer person’s coming of age is inappropriate.

Members of the LGBTQ community and their advocates are worried about the impact on children.

Saffy Cousins is a 6th grader in the Orange County Public School system who came out just a few weeks ago as nonbinary. They say the book “Gender Queer” played a crucial role in that journey. Saffy says they saw themself represented in the pages.

“When I first decided, like, oh, I don’t really feel like a girl at all, or I don’t always feel like a girl. I felt sort of I didn’t know how to feel about that. But when I realized that that was completely normal, having media that showed that was really helpful.”

Saffy says the book has been a valuable resource for them and is worried other kids won’t have that since both Orange and Brevard County public schools have pulled the book from their libraries.

Both districts issued statements calling the book inappropriate for young readers because of its depiction of queer sex.

Deborah Caldwell-Stone is with the American Library Association’s Office for Intellectual Freedom. Caldwell-Stone says challenges to books like “Gender Queer” aren’t really about the content of the books.

“They almost are twin efforts to erase LGBTQIA people from the shelves of school libraries and public libraries.”

“Gender Queer” has been removed from school libraries in at least five other states across the country this year alone, including Rhode Island, New Jersey, Ohio, Washington and Texas.

“It is suicide prevention, in my view. You know, a lot of LGBTQ+ kids aren’t comfortable coming out to their parents, they’re scared. And so having a book like this in the school library is giving them a lifeline.”

Still, people like Misty Griffin are worried that books like “Gender Queer” do more harm than good without the supervision of a sex ed class. Griffin leads the local chapter of Moms for Liberty in Orange County. The group pushed to have “Gender Queer” pulled from the shelves here.

“There’s definitely times when the child is going to come across material that is more mature, but again, it needs to be in the proper setting. We’re not for quote unquote banning books. We’re for not providing books to children, at an inappropriate age, with inappropriate material without parent consent.”

Whether a child is questioning their gender identity or not, Maia Kobabe the author of “Gender Queer” is worried about the impact these conversations are having on young kids who are listening.

“That is literally the thing that I have been worrying about the most in the past couple of weeks is like, what kids might be, just taking in a lot of messages about shame, basically, and, how much they’re going to have to work through that later on. As adults.”

Twelve year-old OCPS student Saffy Cousins, has this to say to school boards in both counties:

“Stop trying to censor this. You’re not making any of this easier for anyone who might be struggling with their gender identity, not being supported, might be going through developing and not knowing how to deal with that. Being uncomfortable with it. You’re not helping by censoring this, you’re just making it a lot harder.”