Gen Z Is Feeling ‘Meh’ About The Vaccine. The White House Is Calling In The Pop Stars 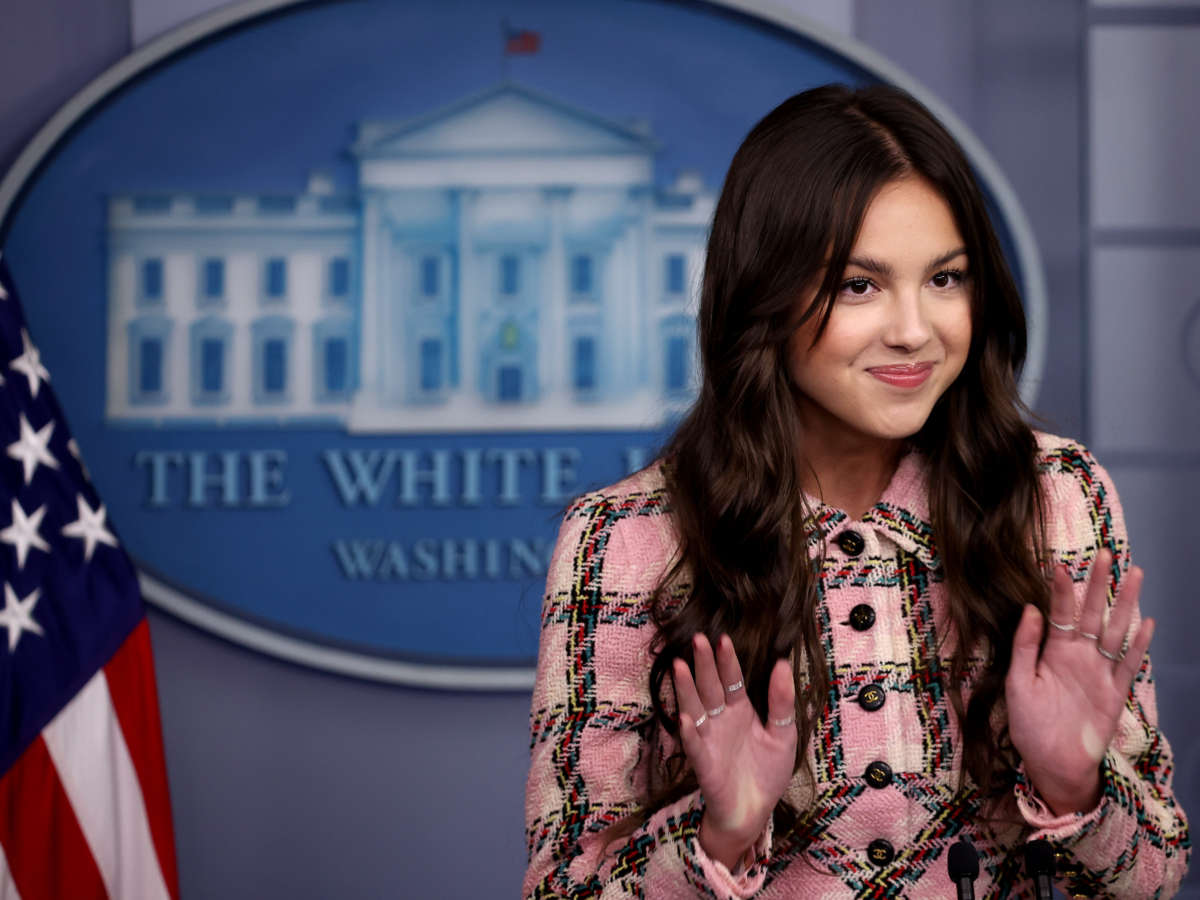 On Wednesday, President Biden lunched with Senate Democrats, hosted governors and mayors for a roundtable on infrastructure and also — hung out with Olivia Rodrigo, an 18-year-old pop star beloved by Generation Z.

Rodrigo, who currently has the No. 1 album in the country and whose song “Drivers License” has been a radio staple for months, recorded public service announcement videos with Biden and Dr. Anthony Fauci and made an appearance in the White House briefing room to promote coronavirus vaccines.

Her visit underscores one of the roadblocks to vaccinating more Americans right now. Only about 42 percent of people 18 to 24 have gotten fully vaccinated, according to the Centers for Disease Control and Prevention. That’s compared with nearly 60% of all adults in the United States. Many young people just aren’t in a rush to roll up their sleeves.

That’s spurring public health officials and the White House to pilot new strategies to reach them as the delta variant spreads. And in some places, young people are taking the lead themselves, trying to reach their peers.

@miafinneythis was the highlight of my week 😱 everyone do your part and stay safe! #madetosave♬ original sound – Mia Finney

At Texas A&M University, James Lifton and Arham Imran arrived on campus for their first in-person semester last spring. They’d been transfer students and didn’t know too many people yet. When they both ended up in line for food at Panda Express, they started chatting. The pair became fast friends.

“I’m a political science major,” Lifton says. “He’s a STEM major. And one of the things we like to do is, we like to argue about political issues. We were just talking about, like, the vaccine, is it worth it?”

In Texas, Lifton wanted to get vaccinated right away. He worried about spreading the virus to his parents. Imran, though, was hesitant. He wondered whether the shots were developed too fast. Then, when Lifton did get the shot, Imran was surprised by how sick it made his friend.

“I had to bring him Gatorade and his lunch, and I really did not want to be bedridden for two to three days,” Imran says. “COVID didn’t really affect a lot of people my age so I didn’t feel any sense of urgency to get it.”

Of course, getting COVID-19 could lead to more than a couple days of being bedridden. Younger adults are among the age group most likely to get infected. Although deaths from COVID-19 are extremely rare among 18- to 29-year-olds, they account for the largest share of total infections of any age group.

Jordan Tralins, a rising junior at Cornell University, has been trying to help her generation catch up.

She started the Covid Campus Coalition, now on almost 30 campuses, to help promote social distancing and mask-wearing. Lately, the coalition has pivoted to promoting vaccines. Tralins says it’s important to meet young people where they are — and let them take the lead in disseminating good information about the vaccines to their peers. Tralins says the White House was slow to adopt this approach early in the rollout.

“People from my generation don’t spend their free time sifting through scientific literature to try to formulate opinions about scientific matters,” she says. “We really look at what’s on our social media, and that influences the way that we think.”

Scrolling through Instagram and TikTok, Tralins noticed feeds full of misinformation. Some Gen Z TikTok users have massive reach — pumping out videos to tens of thousands of followers.

One reason that pops up a lot, without any evidence, is that vaccines cause infertility. Again, not true. On TikTok, Tralins knocks down myths such as that one and explains how the shots work with videos that are funny and to the point.

The reach of Tralins’ own account isn’t huge, but the hope is that with chapters popping up on other campuses, people will share the videos and infographics on their own accounts, so youths are hearing from those they know and trust in their own communities.

“My generation is not as selfish as we’re painted to be,” she says. “I just think that some young individuals were misguided through this process.”

Tralins says young people’s enthusiasm about vaccines varies a lot, depending on geography. At Cornell, where Tralins goes to school, the college has mandated vaccines for the fall, and students quickly lined up for shots.

On other campuses, especially in the South where student bodies are more ideologically divided, it’s been more difficult. Many of the most prolific TikTokers spreading misinformation about the vaccines tout their conservative bona fides and support for former President Donald Trump.

Reaching young people who are not enrolled in college or in rural areas is another hurdle. That’s why Tralins says social media can be such a powerful tool.

The White House may be catching on. Last week, Fauci started showing up on TikTok, appearing for interviews with Gen Z TikTok stars such as Mia Finney who have millions of followers. The administration also launched a campus vaccine challenge and a student COVID-19 corps, among other efforts.

Thanks for stopping by, Olivia, and for using your voice to urge young people to get vaccinated. If we all do our part and get the COVID-19 vaccine, we can defeat this virus once and for all. Let’s do this. pic.twitter.com/ovn12CUjLu

A study published this week from the University of California, San Francisco found that about 1 in 4 unvaccinated people ages 18 to 25 said they “probably will not” or “definitely will not” get the vaccine.

In Washington, D.C., only 30% of young adults are vaccinated, and the disparity between wealthy and white neighborhoods and working-class, Black and brown ones is still huge.

“For many of them, they do know family members who have passed away because of this virus but still, somehow, think they’re super hero-immune to it,” City Council member Christina Henderson says. “So we still have a lot of work to do.”

The District of Columbia recently popped up vaccine clinics at high school graduations, but they were not a hit.

Henderson says incentives such as gift cards only do so much, but she wonders whether help with college tuition might work. And she recognizes the importance of who delivers the pitch, too.

“You or me or President Biden probably aren’t the best messenger for this group of folks, so what are the other credible messengers we’re getting out there who can have real conversations with young people?”

In Louisiana, state health officer Joseph Kanter says hesitancy among young people worries him. It’s one factor holding down the state’s low vaccination rate. In focus groups, however, Kanter has been hearing something that gives him hope.

“The answer usually of folks who haven’t gotten vaccinated yet is, ‘Yeah I’ll probably get vaccinated at some point, I’m just not there yet.’ ”

That’s why Lifton is still working on his friend Imran.

“My best argument is do it not just for yourself, but do it for those around you,” Lifton says. “Because I think all of us can agree we want to go back to where we can shake hands with people, hug our family and hang out with our friends.”

Imran is weighing the decision carefully. He might get the shot before fall semester starts. For now, he says he’s still on the fence.