Gaza Talks To Continue As Cease-Fire Between Israel, Hamas Holds 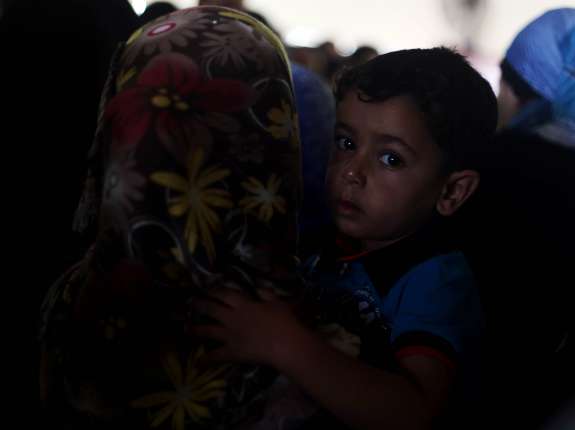 A Palestinian boy, hoping to cross into Egypt with his family, is held by his mother as they wait at the Rafah crossing between Egypt and the southern Gaza Strip on Tuesday. A cease-fire between Israel and Hamas held for a second day Tuesday as officials from both sides held indirect talks in Egypt.
Image credit: Ramadan el-Agha

A three-day truce between Israel and Hamas appeared to hold for a second day today as negotiators planned to meet in Cairo for indirect talks on prospects of a lasting cease-fire in the Gaza Strip.

The two sides attended the Egypt-mediated talks Monday in Cairo, but The Associated Press quoted a senior Israeli official saying the talks had not gone well.

“The gaps between the sides are big and there is no progress in the negotiations,” he said, according to the AP.

Here’s more from the wire service:

“A member of the Palestinian delegation said that in Monday’s talks, Israel had offered a number of concrete measures aimed at improving life for Gaza’s 1.8 million residents, including an increase in the number of daily goods trucks crossing into the territory from Israel, and the free transfer of funds by the Palestinian Authority to Hamas-affiliated government employees in Gaza.

“Also included in the purported Israeli package, the official said, was an easing in transit conditions between Gaza and the West Bank and an eventual quadrupling — to 12 miles (19 kilometers) — of the sea area in which Gaza fishing vessels are permitted to operate.

“The official said that Israel was tying continuing Palestinian demands for the opening of a Gaza sea and airport to a verified cessation of smuggling, development and manufacture of weapons in the territory.”

As we told you Monday, the fighting between Israel and Hamas in the Gaza Strip has left nearly 2,000 Palestinians, mostly civilians, and 67 Israelis, most soldiers, dead. Hamas has fired nearly 3,500 rockets against Israel since the violence began in June.

A previous three-day cease-fire ended last Tuesday when Hamas militants resumed firing rockets; Israel retaliated. Talks that accompanied that previous truce collapsed partly because Israel rejected Hamas’ demands for an end to Israel and Egypt’s blockade of the Gaza Strip that has had a severe impact on the territory’s nearly 2 million people. Israel has been reluctant to provide concessions to Hamas, which controls the Gaza Strip. Israel considers the group a terrorist organization.

The current fighting between the two sides began in June following the abduction and killing of three Israeli teenagers in the West Bank and the subsequent killing of a Palestinian teenager in Jerusalem.