GameStop Hearing Today: Roaring Kitty Along With CEOs To Appear Before Congress 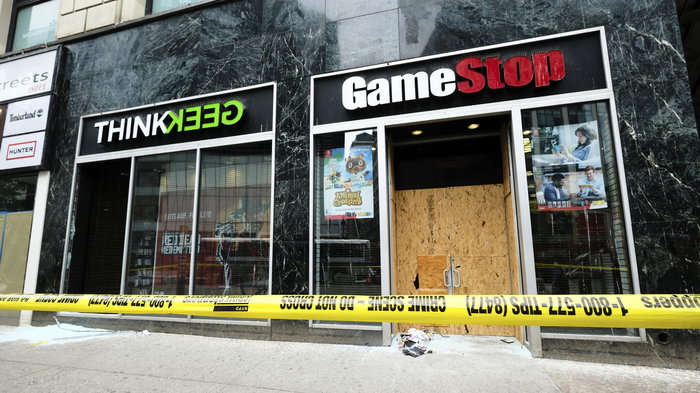 ThinkGeek and GameStop stores on Broadway show signs of damage after a night of looting and and social unrest following George Floyd police brutality protests in Manhattan, Tuesday, June 2, 2020, in New York. (Photo by Evan Agostini/Invision/AP)

The “meme stock” saga that began with wild swings in the price of GameStop stock last month opens a new chapter today. The House Financial Services Committee is convening a noon hearing to hear from major players touching several facets of the story.

The hearing is titled “Game Stopped? Who Wins and Loses When Short Sellers, Social Media, and Retail Investors Collide.”

In announcing the hearing, Chairwoman Maxine Waters took particular aim at hedge funds, saying “private funds engaging in predatory short selling to the detriment of other investors must be stopped.”

In January, GameStop stock soared over 2,000%, and turned Wall Street upside down. The GameStop trade devolved into a David vs. Goliath battle between small investors and powerful hedge fund professionals. For several days, the little investors beat out the big ones and captured the imagination of the entire investing world, and more.

It all started with the Reddit.com forum WallStreetBets and one particular user named Keith Gill, whose Reddit screen name contains an expletive—he also went by the alias RoaringKitty on YouTube.

The 34-year-old, who formerly designed financial education materials for MassMutual, was an early and vocal proponent of GameStop. He believed the struggling strip mall video game chain would go through a huge revival and that its stock was undervalued. Gill posted his trades on YouTube and Reddit and developed a group of avid followers.

Even before the stock skyrocketed, Gill claims his GameStop trade made him a millionaire. He eventually posted a picture on Reddit showing that a $53,000 bet on GameStop had soared in value to $48 million.

Gill, who is also testifying before Congress, used to show off his trades with the acronym YOLO, for “you only live once.” But in prepared testimony, he is more subdued.

“The idea that I used social media to promote GameStop stock to unwitting investors is preposterous,” Gill says.

After GameStop, several other stocks like AMC also soared, mostly fueled by Reddit users. They became known as meme stocks because of certain code phrases like “We like the stock” or “YOLO buys” accompanied by a rocket emoji, which were shared widely and would go viral. Reddit chatter was alive in anticipation of the hearing.

And Gill did manage to sneak a reference to one of the most popular GameStop memes into the end of his prepared testimony, saying “In short, I like the stock.”

Gill is also facing a proposed class action lawsuit, alleging that he manipulated the market for personal profit.

Another popular theory that took hold on Reddit was that hedge funds colluded with retail brokerages and trading platforms like Robinhood to kneecap the small investors.

Robinhood CEO Vlad Tenev said in prepared testimony that “any allegation that Robinhood acted to help hedge funds or other special interests to the detriment of our customers is absolutely false.”

Tenev’s popular no-commission stock trading app has changed the industry, leading other retail brokerages to abandon their own trading fees, and spurring a huge influx of new retail stock investors attracted by the app’s user-friendly design. Robinhood has drawn criticism for making investing perhaps too easy and game-like, and allowing inexperienced investors access to leveraged tools like options trading.

Hedge funder Gabriel Plotkin said in prepared congressional testimony that his firm, Melvin Capital, “played absolutely no role in those trading platforms’ decisions.” Melvin Capital lost more than 50% of its investments in January on losses from short selling, or betting against stocks like GameStop and others.

As Melvin’s losses mounted, the investment firm Citadel LLC stepped in with a large cash investment in Melvin. Citadel CEO Ken Griffin will also testify at today’s hearing. A separate business Griffin also co-founded, Citadel Securities, drew scrutiny due to its role as a “market maker,” an entity that stands to profit from increasing trading volatility and volume by earning tiny profits on millions of stock transactions.

Reddit CEO Steve Huffman, who will also testify, describes the WallStreetBets community as one that specializes in “higher risk, higher-reward investments” but also one with “significant depth,” where members show “affection” towards each other.

“The self-deprecating jokes, the memes, the crass-at-times language, all reflect this,” Huffman says in his prepared testimony. “A few weeks ago, we saw the power of community when the traders of WallStreetBets banded together at first to seize an investment opportunity not usually accessible to retail investors, but later more broadly to defend all retail investors against the criticism of the financial establishment.”