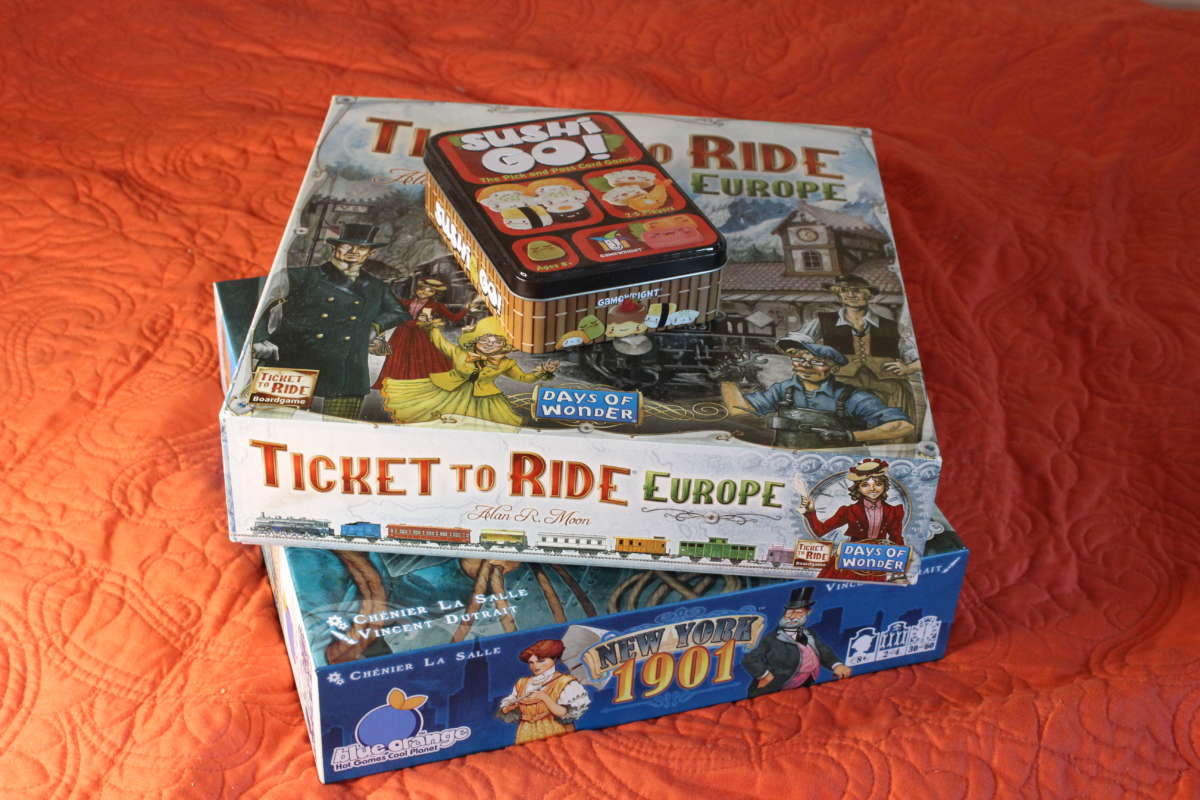 We asked WMFE’s staff members what games — video, board, card, etc. — they’re playing during this time of social distancing. They responded with a list of games you can play with your family in your home and others that you can play with friends or family, wherever they are, as long you have a good Internet connection and video conferencing app such as Zoom.

What games are you enjoying? Leave us a comment.

Scavenger hunt: We tried a scavenger hunt with our 10-year-old and her cousins spread throughout different parts of the country. It involves some planning and preparation — and needed reliable Internet plus Zoom, Skype or something similar. The parents came up with site-specific clues to hide in their respective homes. For example, “Look around to find Japan” and there would be the clue taped onto the map of Japan on the globe. Then that clue would have the name of the kid whose turn was next, so the kid who found the clue would read it out loud and the next kid would look around their house for the clue. The clues bounce around from city to city. Sounds complicated? Maybe a little, but the payoff was worth it — plus they had to use teamwork.

Ticket to Ride: a classic game of skill, cunning and railway entrepreneurship. Race to build the most rail lines and get the coveted longest route. If you’re building a tunnel, make sure you have enough resources or it’ll collapse. The game is available in different versions set in various parts of the globe.

New York 1901: Build skyscrapers in turn-of-the-century New York City. This is a cool game — not too difficult to get the hang of and a bit like Monopoly, although quicker to play.

Sushi Go!: This is a fun game for families — You’ve got to use a bit of strategy and think ahead. Take a gamble and grab the wasabi early to level up your sushi. Save some room for dessert. The cards have cute graphics.

Drawful 2: this is a fun game to play when your family is spread around the country — or globe. It’s a classic drawing/guessing game with some fun graphics and cues. Again, you need devices, reliable Internet, etc.

Monopoly (Nintendo Switch): The classic board game, where you buy properties and charge rent, goes virtual in a big way. The board comes to life and you can play by the ‘official’ rules. And it still brings the same family feuds and friendly fights.

Spades: This is a trick-taking card game. Among my family and friends, we play partner-style with four people sitting at the table. The goal is to take the number of books that were bid before play of the hand began. And spades always trump.

Dominoes: Depending on where in the Caribbean you’re from, you may have some different rules for Dominoes. My family is Jamaican and, so I play according to their rules. We play partner style and the goal is to beat the other team six times in a row for what’s known as “Six Love.”

Mario Party Tennis (Nintendo Switch): This is a great game for individuals or up to four people. You can play the story mode by yourself on the console. Or you could grab some friends, remove the controllers from the Switch, swing it like a real racquet, and play tournament style in free play. You can play in singles and doubles.

Sonic Races (Nintendo Switch): If you’re a fan of Mario Kart, then you’ll love this racing classic. This game gives you all the nostalgia of Sonic games while allowing you to race against up to 4 of your friends.

Monopoly: Each player chooses a piece and moves around the board buying properties and charging rent. There are hundreds of house rules, whether you collect money in the center of the board if you land on Free Parking or automatically get $100 by rolling snake eyes. The goal is to be the last player with money in the bank.

Clue: Each player chooses a character from a list of potential suspects and moves around the board trying to solve a murder mystery. The goal is to be the first person to correctly guess who murdered the victim, where in the house they committed the crime, and which weapon they used to do it.

Heads Up: Each player gets a word on a piece of paper or app on their phone that they can’t see. They hold it up to their head, while other players give them clues. The goal is to guess the word correctly before time runs out. The popular online Ellen Show version has themed word categories like superstars, blockbuster movies and animals.

Kerbal Space Program (PC) – Take control of your own space program and attempt to launch rockets. It’s a really fun game that teaches physics, orbital mechanics and engineering. It’s tough, but there are lots of great YouTube videos to help.

Overcooked 1 & 2 (PS4, XBOX, PC) – A fun “couch co-op” that puts you and your partner in the kitchen of various restaurants, tasked with cooking orders as they come in. Sounds easy, but the scenarios get harder and harder — requiring teamwork and sharp communication.

UNO: It’s a classic card game that’s tough to play with just two players. Since it’s just my wife and me at home these days, we’ve modified the rules a bit. You can only use skip and reverse cards once per ‘round’ — and whoever loses has to do the dishes!

Toon Blast: It’s one of those addictive phone games where you have to solve puzzles by getting the same color blocks together to form rockets and bombs to destroy the roadblocks to winning. It’s silly but a great time waster. In the app stores.

Bill Johnson found his handmade wooden Mancala board at a thrift store on Sanibel Island. The label was marked as a serving tray for deviled eggs. Photo: Lori Harvey

Mancala: We’ve been enjoying one of the oldest games around. Mancala’s origins are rooted in ancient Egypt. Stone Mancala boards have been found dating from 1400BC. The game spread from Egypt to many parts of Africa and then to the Middle East. We found our Mancala board at a thrift store on Sanibel Island, the label was marked as a serving tray for deviled eggs. Best $3 I ever spent.

Words With Friends 2: It’s Scrabble that you can play with friends via your phone. If you want to play, message me at jgualda@wmfe.org. I honestly don’t know why it’s not called Scrabble with Friends, but what do I know?

Cribbage: I love playing this card game because I used to play it with my father in law.

Balderdash: You have to be really good at keeping a straight face when fibbing about what the word really means

Boggle: It’s so great to find four-, five- and six-letter words when playing.

What games are you enjoying? Leave us a comment.

Catch up on WMFE staff recommendations for movies, TV and books.