Listen in: FusionFest Diversitastic! takes one last stop, this time in Yemen, as global food tour wraps up in Orlando for 2021 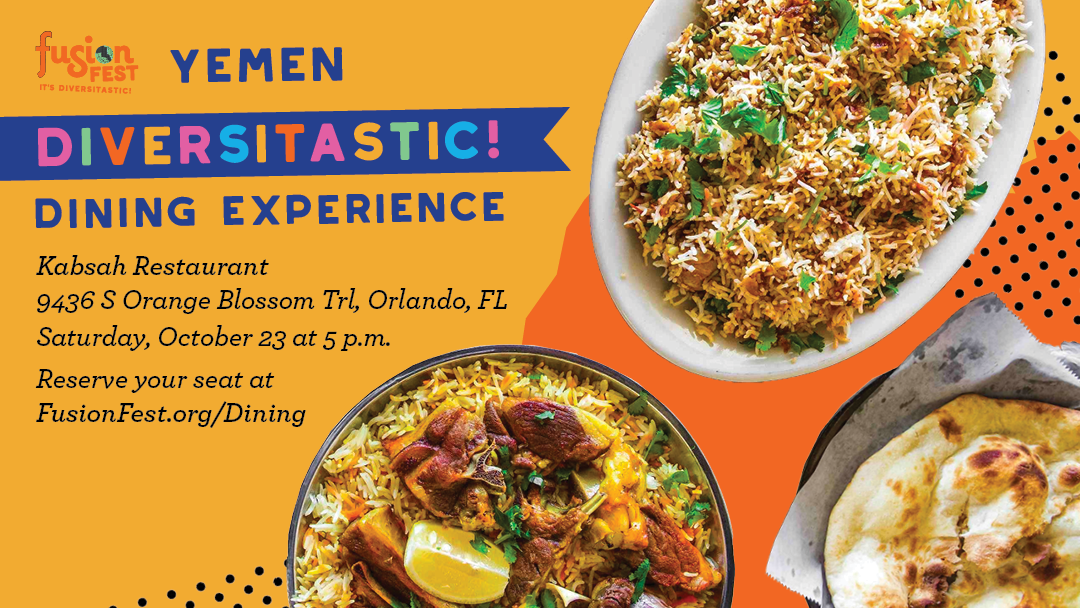 Yemen has been in the news a lot lately with an ongoing humanitarian crisis and civil war. This weekend, organizers of FusionFest Diversitastic! are shining the spotlight on Kabsah, a Yemeni restaurant in Orlando.

Danielle: So, Terry, why Yemen, why finish this grand tour of the world with the last stop in Yemen?

Terry: Actually how we discovered this restaurant during a time when our country was being kind of disparaging of some countries and including Yemen. One of the people who comes to FusionFest, kind of wanted to look up any place that was of people of descent from any of those disparaged countries to say, ‘hey, here in Central Florida, we welcome you.’ And they found Kabsah restaurant and went to it and said, ‘Oh, this is so incredible.’ And so they called us and let us know we need to check out this place.

Danielle: Yeah, Terry, and of course you were referring to countries that were part of a Muslim travel ban under the Trump administration. You know, Yemen is a very misunderstood country and I think most Americans will think about it in terms of you know, things that they’ve seen on TV like the civil war and the famine but Abdullah, what do you want them to take away from the event?

Abdullah: The culture is great in Yemen and I actually I have had my son prepare a few words. We’re gonna have him give a speech over there on Saturday on lots of different things in Yemen there is a lot of good things. We picked a few things and he’s going to give a speech about it. One thing Yemen knows about is hospitality.

Danielle: Yeah very hospitable right? I had a question Abdullah about the name of the restaurant. What does that name mean?

Danielle: Interesting and what does it entail what’s actually in the dish?

Abdullah: It’s rice and I mean you could choose chicken or lamb. You could choose your meat and it’s mixed together with different kinds of spices we’re bringing from back home and it’s really good. This actually is a very, very popular dish.

Danielle: Okay, can you tell me the story behind the restaurant. How did it come to be here in Orlando?

Abdullah: A friend of mine, he came from back home and opened like three locations. He tried to bring you know, Yemen culture because when he when he moved to the USA he came to a different state. And there were lots of Yemeni restaurants, I mean, in different states and we came here there is there is no Yemeni food at all in Florida, and he decided to open like three locations with different cities. We do get I mean, it is really good. I mean, to provide different foods for people in that way they could try like a different taste.

Danielle: What are you both looking forward to most for this Saturday?

Terry: Definitely. FusionFest itself, its mission is to celebrate the many heritages we have here in Central Florida, to learn about each other, get to know about our different cultural heritages and then see how that influences us as we together create an innovative and a wonderful community that honors and celebrates that diversity as opposed to is afraid of and hates what’s different than us.