Funeral For Stephon Clark To Begin As Sacramento Unrest Continues 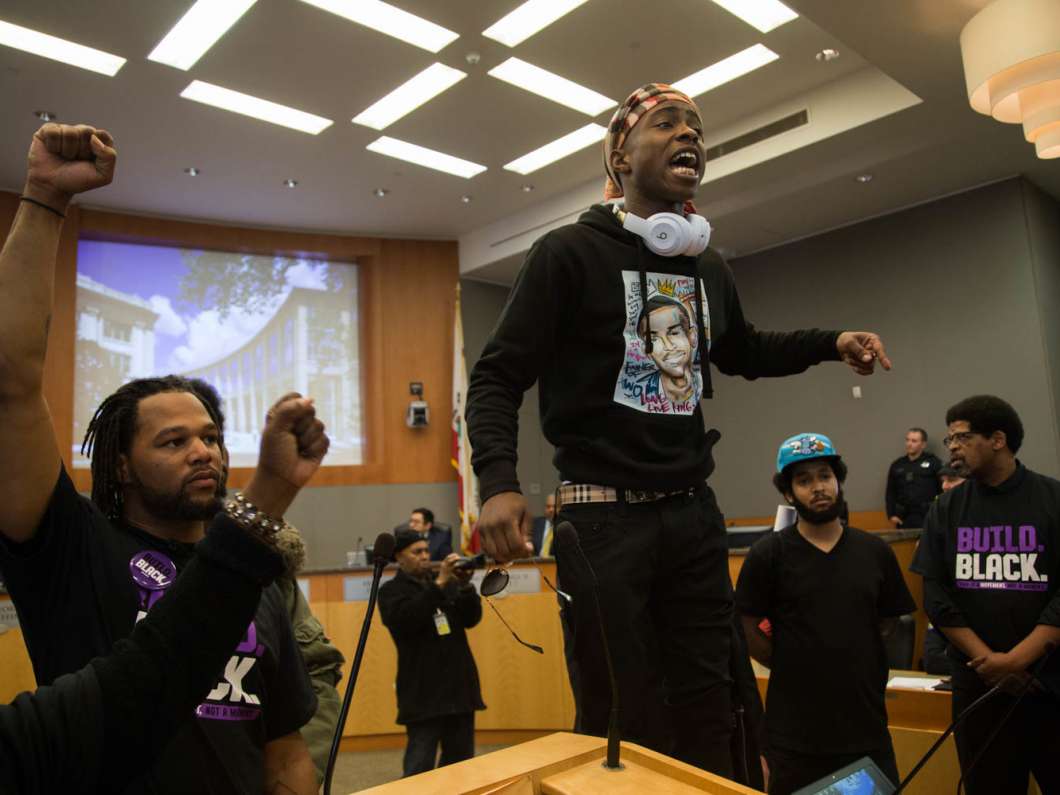 Hundreds showed up for a community forum at City Hall Tuesday. At one point Stephon Clark's brother, Ste'vante Clark, jumped atop the mayor's desk and later stood atop a lectern to deliver emotional, expletive-laden comments.
Image credit: Andrew Nixon

The funeral for Stephon Clark is set for Thursday in Sacramento, with Rev. Al Sharpton scheduled to deliver a eulogy. Later in the day, more protests are expected in a city that has experienced nearly two weeks of continuous unrest after the shooting of the 22-year-old Clark, an unarmed black man, by two police officers.

Demonstrators blocked thousands of fans from entering Sacramento Kings basketball games twice in the past week. And on Tuesday night, hundreds of activists crashed a community forum at City Hall, where outbursts and disorder prompted the mayor to abruptly cancel the meeting.

Clark was killed on the night of March 18 after law enforcement responded to complaints of an individual breaking car windows. Two Sacramento police officers pursued Clark into a backyard — which turned out to be the home of his grandparents — where they shot at him 20 times.

After the fatal shooting, an officer said Clark had a gun in his left hand, but police later only found a cell phone.

During a White House briefing on Wednesday, press secretary Sarah Huckabee Sanders called Clark’s death “a terrible incident,” but said that it was “a local matter.”

Protests have gripped Sacramento since the police shooting. Sacramento Mayor Darrell Steinberg, who previously said he would not “second guess” the officers who shot Clark but later called his death “just plain wrong,” is struggling with keeping order and allowing the community to express outrage.

“I did not want mass arrests,” he told Capital Public Radio on Wednesday, adding that if the police department had not shown such restraint in the past week the city “would have risked a full-scale riot.”

At City Hall on Tuesday night, hundreds showed up for a community forum, where officials were scheduled to listen to residents for six hours. That meeting was cut short, however, after several disruptions — most notably Stephon Clark’s brother Ste’vante Clark, who jumped atop the mayor’s desk and later stood atop a lectern to deliver an emotional, expletive-laden speech.

“Hey shut up, you don’t run s*** here,” Ste’vante Clark yelled at the mayor during the meeting.

Steinberg called the forum into recess after the outburst. Ste’vante Clark left without incident and the meeting continued for a couple hours, until the mayor canceled it due to safety concerns.

Also on Tuesday, a large crowd of demonstrators stood in front of doors to the Golden 1 Center and, for the second time in three games, forced the team to close the entrances to the Kings arena.

On Wednesday, city officials and the police department vowed not to allow activists to disrupt Thursday’s game.

A spokesperson says police have made two arrests during protests, which are scheduled to continue at 3 p.m. PT Thursday in front of the district attorney’s office. The funeral is scheduled for 11 a.m. PT.