From the Pages of Orlando Weekly: Orlando’s Black Art Scene 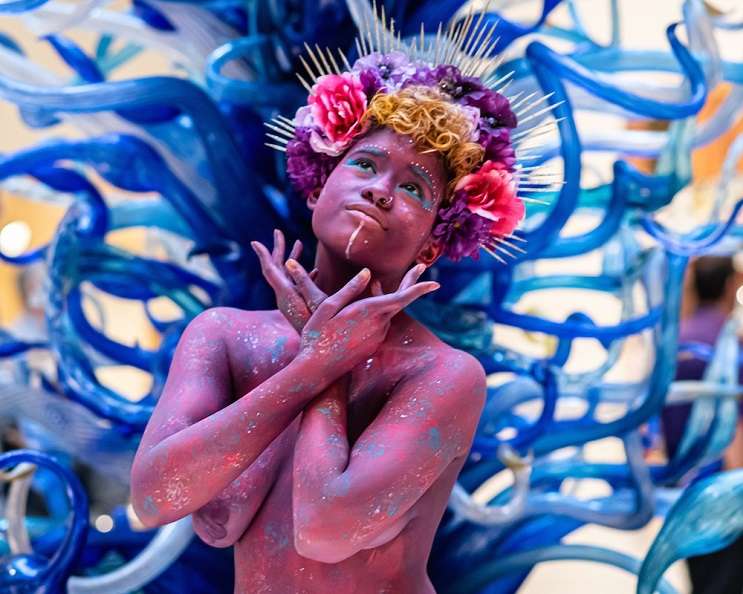 Image: A member of the Rainbow Myriads at 'Indigenous Futurism,' Orlando Museum of Art, June 6 2019 - PHOTO BY MATT KELLER LEHMAN FOR ORLANDO WEEKLY

With last week’s Juneteenth celebration in the rearview, it’s time to talk about what goes on with Orlando’s Black artists year-round.

In early June a group of young Black artists took over the Orlando Museum of Art’s 1st Thursdays party. “Indigenous Futurism” celebrated the African origins of human existence with a mix of old and new art forms: traditional African drummers played alongside producers with MPC beat machines and a modern-dance invocation of ancient spirits.

This group, the Mercury Collective, also hosts a recurring jam session at the Wells’ Built Museum in Parramore. The idea is to connect art, music, and history in one of the few remaining African-American landmarks in Orlando.

Elizabeth Thompson is the executive director of Wells’ Built. She says the Collective breathes life into the space and revives the memories of the Black men and women who helped shape Orlando “before Mickey Mouse came.”

Black art needs not just institutional support, but also direct involvement, says Barbara Chandler. Chandler manages the Hannibal Square Heritage Center in Winter Park, and she’s one of the few Black arts administrators in Central Florida. She says lack of representation behind the scenes in galleries and museums is a reason that Orlando’s Black arts scene hasn’t thrived.

Jamal Ward of the Mercury Collective recently joined OMA’s Associates board. Orlando is a melting pot, he says, and he’s just trying to stir it.