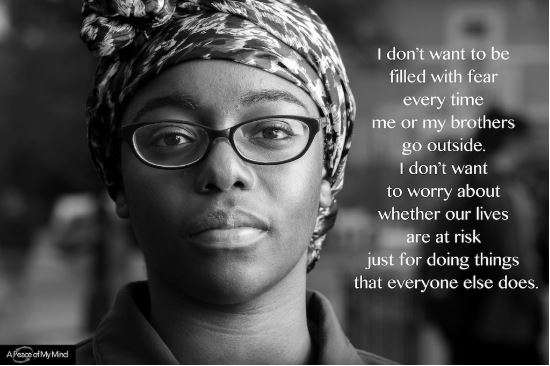 A couple of days after protests began in Minneapolis in the aftermath of George Floyd’s killing, photographer John Noltner went to the intersection where Floyd died in police custody, set up a makeshift backdrop, and took photos and did brief interviews of protesters at the spot. Each portrait is accompanied by some words from the subject, most on the topic of justice, community or tolerance.

Aside from the geographic context, nothing connects Noltner’s exhibit to George Floyd himself — there are no photos of Floyd, or even mentions, aside from a hashtag. But national attention focused on the show branded it a “George Floyd exhibit,” prompting an onslaught of hateful phone calls and emails to the Holocaust Center.

The Holocaust Center’s staff were shocked, since they considered the exhibit’s message right in alignment with their own. The Center was founded by Holocaust survivor Tess Wise, and their mission has always been to build a community free of all forms of prejudice and bigotry.

Executive director Pam Kancher says the Holocaust Center has no intention of closing the show, saying “We are not just a memorial to the Holocaust. We mean ‘Never again’ for everybody.”