From The Pages of Orlando Weekly: Florida will bear the brunt of climate change 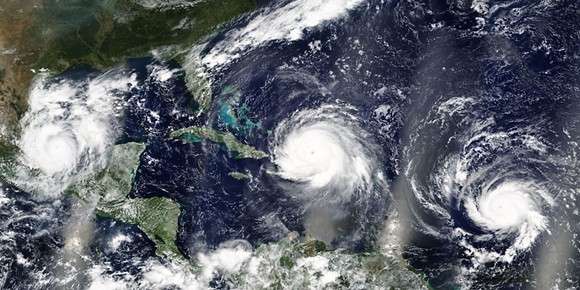 Image: Photo via Adobe Images: Hurricanes Irma, Jose and Katia in the Caribbean Sea and the Atlantic Ocean

The five warmest years in recorded history have been the last five. Climate change is increasingly looking irreversible. Not a day has gone by since its unveiling without news mentions of the Green New Deal. Unfortunately, President Trump, Republicans and even centrist Democrats are dismissing it as a pipe dream.

It’s ironic that Republicans – both lawmakers and voters – have their heads in the sand on global warming, because the states that will be hurt worst are voting for people who are opposed to climate policy.

A newly released Brookings Institution study used economic modeling to estimate climate-related losses (in dollars and deaths) state by state from 2080 to 2099. Then it compared voting records by state and found that – surprise! – the states with the most to lose voted red in 2016. And – surprise again! – Florida was No. 1.

Eight of the 10 metropolitan areas most susceptible to climate catastrophe are located in Florida, with Orlando-Kissimmee-Sanford coming No. 8 in the nation. Luckily, Orlando’s leadership is actively seeking solutions, like the initiatives announced after we won the Bloomberg climate challenge grant.

So bike to work; eat less meat; but don’t forget that the individual actions that matter most are our votes and our engaged citizenship. By the end of the century, the water will be lapping at our ankles. Why do we keep voting for lawmakers without a plan to bail us out?