From the Pages of Orlando Weekly: Florida Man Kicked Off Flight for Wearing Thong as Mask Compares Himself to Rosa Parks 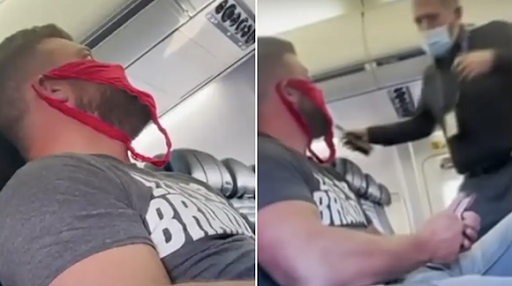 A Florida man has been banned from United Airlines for refusing to comply with the federal mask mandate.

Cape Coral resident Adam Jenne hooked a pair of bright-red lace thong underwear over his ears last week, rather than a traditional face mask, and a flight attendant told him he’d have to deplane. Jenne says he’s pulled the airplane thong stunt at least 20 times since the beginning of the pandemic, but this is the first time he’s been booted from a flight.

Following the incident, United Airlines released a statement praising the crew member for confronting Jenne before the plane took off, saying, “We appreciate that our team addressed the issue on the ground prior to takeoff, avoiding any potential disruptions [in] the air.”

Jenne made a statement of his own to a local TV news station. He called COVID precautions “stupid,” “all nonsense,” and “theater.”

He also compared the act of wearing panties on his face while the Omicron variant creates record COVID spikes across the country to making a stand by taking a seat on a segregated bus.

“Rosa Parks was nobody famous,” said Jenne, “and she changed the course of history.”

United Airlines has refunded the cost of Jenne’s ticket.