From the Pages of Orlando Weekly: Crosswalk Art and Pedestrian Safety 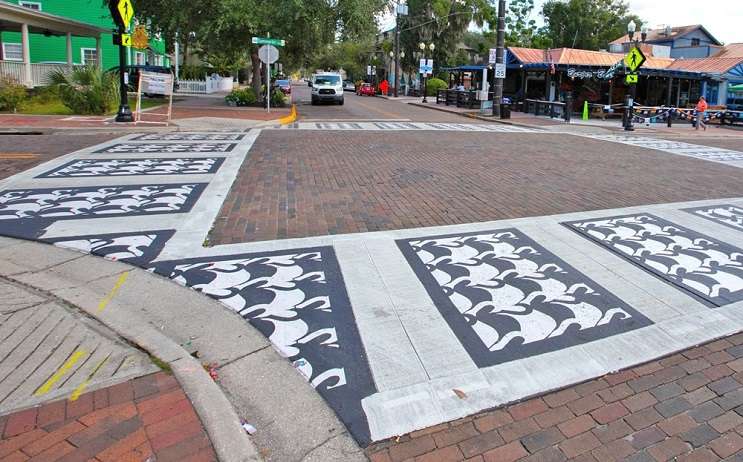 Creative crosswalks are on the rise. They are great to look at, but there’s plenty of disagreement on how they affect safety.

The Thornton Park district recently unveiled a gorgeous new design at the intersection of Summerlin and Washington. The square of interlocking black-and-white swans is great to look at, but at an already confusing two-way stop with heavy foot traffic, in a city whose roads are the most dangerous in the country for pedestrians, safety is a question.

It’s not the city’s first nonstandard crosswalk. In 2017, Orlando approved a rainbow-painted crosswalk near Pulse. But when cities including Ames, Iowa, Atlanta and St. Louis installed similar ones, the federal highway administration asked for their removal, saying crosswalk art is actually “contrary to the goal of increased safety.”

A study out of Rice University responding to the debate over artistic crosswalks says we’re missing the broader point about safety altogether.

Urban researcher Kyle Shelton thinks the FHWA and cities should spend more time considering how to make crosswalks safer by better dealing with the sections of street leading up to them. He says, “If we’re relying exclusively on white paint to protect pedestrians from a moving ton of steel, we’ve failed.”