From Skyhook To STEM: Kareem Abdul Jabbar Brings The Science 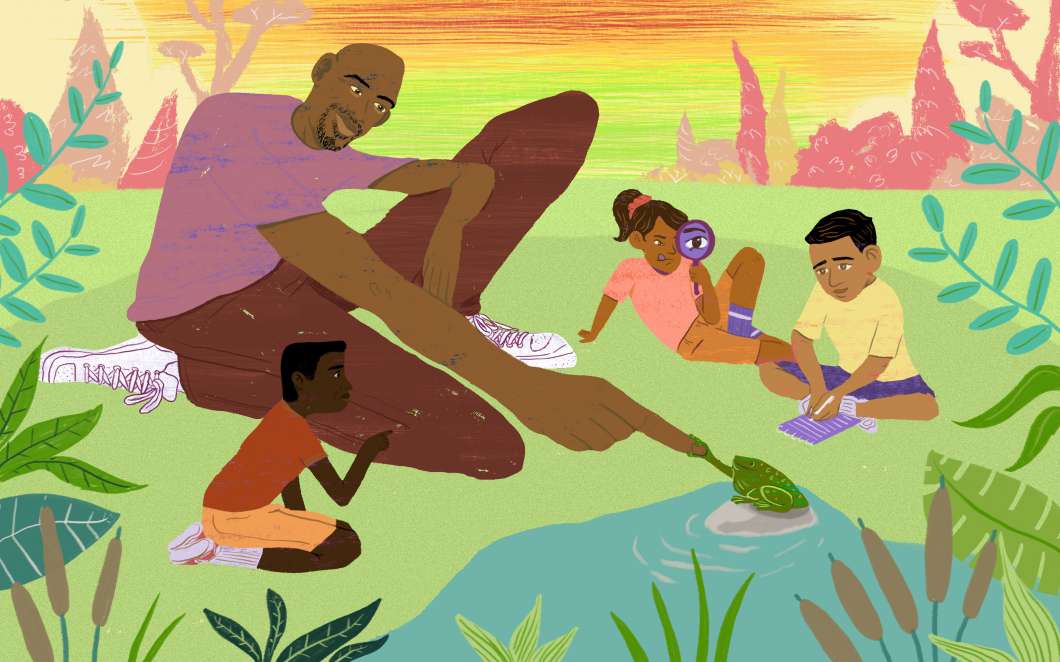 Every week throughout the year, in conjunction with the Los Angeles Unified School District, groups of 4th and 5th graders attend Camp Skyhook at the Clear Creek Outdoor Education Center, one of the oldest outdoor education centers in America. The hands-on science curriculum allows students to study nature up close: take water temperature in a stream; soil or forest samples during a hike; study the local wildlife or explore the stars. That’s alongside the traditional fare of hiking, swimming, and campfire songs.

It’s so popular there’s basically a five-year waiting list for the camp in the city’s schools, where about 80 percent of students receive free and reduced-price lunch.

Having an NBA Hall of Famer and the league’s all-time leading scorer support the camp certainly helps attract attention and financial support.

Abdul-Jabbar puts the spotlight “on environmental literacy and the need for students to be given the opportunity to learn about science in a place where they can do their own investigations and experiments,” says Gerry Salazar, director of outdoor and environmental education programs at LAUSD. “We don’t have rivers and streams at LA school sites.”

They do at Camp Skyhook.

I reached out to Kareem Abdul-Jabbar by phone for details on the program and to find out what motivates him to advocate for STEM Ed.

You continue to have a really interesting, engaging and productive life after your NBA career, including numerous books and more. Why did you decide to start the Skyhook Foundation and Camp Skyhook?

I’ve always been an advocate for literacy and just giving kids tools that they can use to have productive lives. That’s so important. All the good jobs in the 21st century are going to be centered around science, technology, engineering and math. There’s no way around it. So if we can give kids an idea of where the jobs are and what they have to do to get those jobs, they can adjust right now. We try to get to them before they get pulled in various directions by peer pressure and popular culture. It’s so easy. So many of these kids, they want to be LeBron James or Beyonce or Denzel Washington. They think that unless they’re a star they don’t have anything to offer. That’s not true.

We’ve had thousands of kids attend a one-week session where they do hands-on experiments in STEM. They observe the night sky and they learn about water conservation and the effect of wildlife and the effect on wildlife by human interaction with the environment and animals and everything. It’s wonderful what happens there, because the kids get turned on to where to look and what to do. It makes me feel good just knowing what’s been happening.

[note: The camp also partners with NASA to help train Camp Skyhook staff, and the program gets help from UCLA’s Center X on the science curriculum as well as staff training and development]

What do you say to a child, though, that says, “Hey, you’re a basketball star. You did it. I can do it too. I want to play basketball and you’re telling me to study STEM”?

The thing of it is, you can do both. That’s the whole idea. There’s nothing wrong with pursuing your dream as an athlete. There’s been a lot of scholar athletes, and I hope that this is a tradition that continues here in our country.

Your camp and foundation focus on underserved or what some call opportunity youth. Tell me a little bit about who these youth are and what institutions and what people have underserved them?

These are kids mainly from the inner-city here in Los Angeles County. A lot of these kids can see the area where the camp is from where they live, but they’ve never been up there. They’ve never been out of the urban environment, never been very far away from their own home neighborhood. So we take them someplace where it’s a different world, and we try to open their mind up to different possibilities.

Lots of studies (and books and reports) show that African-Americans and Hispanics continue to be underrepresented in engineering and technical fields, and there are big educational equity and access gaps by race, class, and gender. Why do you think diversity in STEM fields continues to be such a challenge?

I think it has to do with the quality of educational opportunity. In more affluent neighborhoods, they have enough money in the school system and in the private schools to have really good science programs, good math teachers, good physics teachers. They get to the kids at an early age, so that environment really engenders more people bearing more fruit for engineering types of disciplines. It’s too bad that that’s the thing that we’re up against. But because this is America and we can get things done here, an outreach and focus on inner-city neighborhoods would bear a lot of fruit. There’s a lot of talent there. It just hasn’t been organized and pushed in the right direction.

The talent hasn’t been tapped and nurtured enough.

Some of it, perhaps, comes down to self-confidence. From schools, parents, society in subtle and not-so-subtle ways — discouraging lower-income and minority children not to reach for STEM careers?

I think that there is a cultural aspect to this. So many kids in disadvantaged areas don’t see themselves as being capable of that or worthy of that, so that’s a real big problem because self-image really enables people to dream. So we’ve got to encourage these kids to dream in ways that heretofore were not seen as possible for them.

How does your camp and foundation try to instill that self-confidence and change that self-image?

We try to give them an idea that they are all worthy of going on and doing great things in chemistry and biology and physics and math and all those things, computer sciences. All the things that feed into this in terms of out there in the technical world are things that most kids are into, fortunately. They’re curious about it, so we try to get them to keep making inquiries and sniffing up that tree. If they do that and try to get it down, if they pay attention in math class, if they pay attention in chemistry class, they can learn it.

What’s been the most satisfying thing about doing this work?

For me, the most rewarding thing is some of the feedback that we get. The popularity of the program speaks for itself. The kids are turned in the right direction, and that really counteracts the influence of gangs and the negative parts of just popular culture that makes learning, in some instances, not cool. We’re going to teach the kids that it’s cool to be the next George Washington Carver. There’s nothing wrong with that. We hope that they learn about Luther Burbank and want to find out what he was all about.

You’re known for your NBA career and all those championships. Talk about what interest, if any, you have in STEM and in science. How does that manifest today?

My dad was into science fiction stories, and he would get science fiction magazines, and I would read those after my dad was through with them when I was a kid. The whole idea of going into space or reaching for the stars and all the information that we get from the cosmos, that kind of fascinated me when I was a kid. So that really fueled my interest. But I ended up swaying in midlife to literature, and my old focus moved away from science to literature stuff. I write now. That is my main thing at this point in my life. But the science and science fiction always fascinated me, and the stuff that has occurred in my lifetime.

Speaking of reaching for the stars and scientific exploration, there’s lots of focus these days the potential for travel to Mars. Any interest in heading up there if there’s enough legroom?

No, no, no, no, not me! I’ll remain earthbound. I think there’s so much more to explore here on Earth that is much more relevant to me. I’m totally fascinated by some of the things that they find in the ocean. Those guys who make those bathyspheres, those deep-diving submarines, that’s pretty incredible technology right there. It’s within our reach.