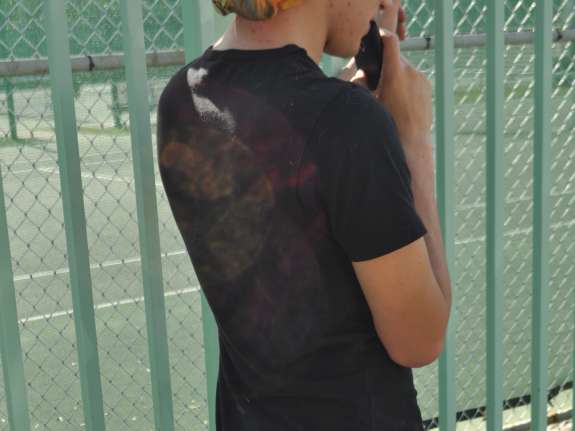 Poison Ivy is sitting on a bench in a park in Miami. She came out as a transgender woman to her family in January – and then her grandmother kicked her out of the house.

“She didn’t want to see me transitioning,” Poison Ivy said. “It’s just so hard for her to notice that her grandson, someone that has loved her for a long time, is becoming a woman.”

Poison Ivy didn’t want to do this interview where she lives now. Some of the friends she moved in with don’t know what she does for a living.

“I charge usually $160 and sometimes $200 dollars a session or sometimes an hour,” Poison Ivy said.

We’re not using her real name to protect her identity. She asked us to call her Poison Ivy.

She says some of her clients want to have sex. For that, she charges extra.

Men offer to pay a lot more if she’ll have sex with them without a condom – but she says she won’t do it. She knows the risks.

Poision Ivy gets tested regularly. She’s negative. But some of her friends are not.

“There are about 17 (transgender) women that I know that have HIV,” Poison Ivy said.

Shortly before she got kicked out of her grandmother’s house, Poison Ivy decided to use her body for cash. Finding another job hasn’t worked out.

“It’s hard as a trans woman trying to find a job and trying to be yourself at this job,” she said. “When you look at it in term of survival sex work, it’s the ostracism, the prejudice.”

Arianna Lint is the coordinator for transgender services at Sunserve, a Broward County nonprofit — and a transgender woman who’s HIV positive. “Many of my clients, they are girls that do sex work,” Lint said.

Sexual contact is the most likely way people get infected with HIV. But sex work is not the only way transwomen are contracting HIV. Transwomen are twice as likely as the general population to be poor and can’t afford many of the procedures they need to complete their transition.

Lint believes she became infected with HIV sharing needles while getting underground cosmetic surgeries. She says transwomen are also at risk when they share needles for hormones.

“I think it was from silicone injections,” Lint said.

“We need outreach, we need education and we need people to go out do these things,” Zayas said. “But we can’t request the funding for it if we don’t know how many there are.

It’s estimated that a third of trans women are HIV positive. But no one has a clear numbers because trans people are not really being counted like other communities.

Trans women are often incorrectly lumped in with men who have sex with men.

“It was in Homestead at like 3 a.m. in the morning and my client like tried to basically rape me,” Poison Ivy said. “When I go get my purse and dump it out, my TASER was there so I grabbed my TASER and I tased him. He backed up. He was like a big man a very big man. I grabbed my stuff and left.”

Poison Ivy says she doesn’t want to take these risks. She’s working on her certification to become an HIV/AIDs tester. She think trans women would feel safer with her because she knows what they’re going through.

“And I know their fears,” she said.

She thinks more transwomen should be hired to work in HIV prevention. In the meantime, though, she says she’ll continue to do what she has to do to survive.

Nadege Green is a reporter at WLRN in Miami.