From A-To-Z, We Have You Covered For The NCAA March Madness Basketball Tournaments 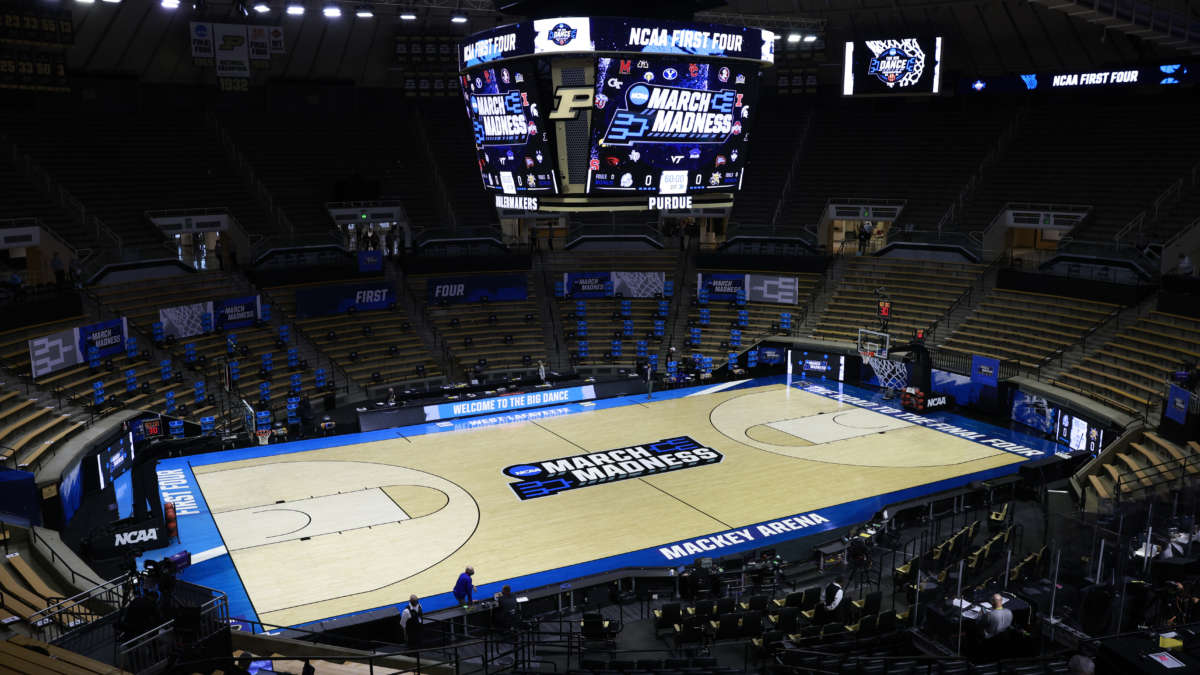 All men's NCAA Basketball Tournament games are being held in Indiana in a makeshift coronavirus bubble. Purdue's Mackey Arena in West Lafayette is hosting some of the early games.
Image credit: Justin Casterline

For college basketball fans, March Madness is back and a historic wait is over. Last year, for the first time ever, the wildly popular men’s and women’s Division 1 basketball tournaments were canceled because of the pandemic. Play starts today in the main draw of the men’s tournament; the women start Sunday.

A year’s worth of pent up excitement is about to burst, although still muted somewhat by the coronavirus.

Here to help guide, an A – Z of March Madness.

A – Geno Auriemma. The UConn head coach has won more women’s national titles than anyone — 11 with the Huskies — but he faces a unique challenge as his quest for a 12th begins. Last Sunday he tested positive for COVID-19. He says he’s symptom free but he has to isolate and can’t join the team until March 24th. That means he’ll miss the Huskies’ first two games of the tournament, assuming they win their opener. UConn is a freshman-heavy young team, but assistant Chris Dailey has been with Auriemma for three-plus decades and is expected to fill in ably.

B – Betting is back! Even though the NCAA would like you to focus on the purity of student-athletes engaged in wholesome competition…aside from the occasional flagrant foul…there’s money in the Madness. Lots of it. Around $10 billion, according to estimates, moves through a combination of office pools, bracket contests, “friendly” bets and sportsbook action. And since the last March Madness in 2019, legal sports betting has grown thanks to a 2018 Supreme Court ruling that opened up previously banned commercial sports betting in most states.

C – Coronavirus. Yes the tournaments are back but the pandemic is still here and reshaping the usual look and feel of March Madness. To start with, the men’s tournament kicked off two days later than normal due to logistics and health and safety protocols involved in bringing 60 plus teams to one location (see “I” and “T”). Players will be tested daily, paid for by the NCAA. There will be no bands and no cheerleaders that traditionally give games the college feel. Masks and social distancing will be as prevalent as coaches’ X’s and O’s. All a team needs to compete is five eligible, healthy players – but if a team can’t muster that, there are no options. As of Tuesday night, the men’s and women’s brackets were locked. Meaning if COVID strikes a team in a big way, there’ll be no replacement. The team’s opponent simply moves on in the bracket.

E – Early round upsets. Who doesn’t love them? Other than fans of the higher seeds. And ever since that historic day in 2018, when the University of Maryland, Baltimore County, beat Virginia and became the first number 16 seed to beat a number 1 seed in the men’s tournament, why not believe? So here’s to Drexel and Hartford and Texas Southern and Norfolk State. And the whiteboards in their locker rooms that should have the briefest of inspirational messages – UMBC.

F – Fans will be part of the tournaments, but the numbers are limited. At men’s games, arenas will be 25% full, but that’s not just fans. It also includes teams, officials, coaches, athletic trainers and others. Same for the women’s tournament – starting with the round of 16, there’ll be a 17% capacity limit. Is this wise? Some health experts say no. But the NCAA says it made its decision after consulting local health officials at the sites of the men’s and women’s events. There weren’t lotteries for tickets – fans who got in went through the competing school’s athletic department or an NCAA website. Suffice it to say, there was greater demand than supply.

G – Gonzaga is the overall number 1 seed in the men’s tournament and the first team since 2015 to arrive undefeated. But there are plenty of skeptics, who’ve watched year after year, as Gonzaga dominates its West Coast Conference only to lose in the tournament. As written in The Ringer, “It’s March, which means flowers are blooming, birds are singing, and America is united in its distrust of the Gonzaga Bulldogs.” Can the team led by veteran head coach Mark Few finally show it can win the less-than-respected WCC and beat the best from the more prominent conferences? Seems like the Zags’ best chance has arrived.

H – A Hashtag on the eve of the men’s tournament is a reminder that all is not well in a system that has traditionally used athletes to make lots of money, and not shared it with the people doing the labor. A group of 15 men’s tournament teams took to social media this week, uniting behind a #NotNCAAProperty movement, speaking out against “unjust NCAA rules that deny college athletes equal freedoms and basic protections.”

I – Indiana, specifically the Indianapolis area, is home for the entire men’s tournament. As a way to reduce travel and slow the potential spread of the coronavirus, organizers chose a single location for the event’s 68 teams. It won’t be an airtight protective bubble like the NBA had in Florida last season. But it’ll try to create a more secure environment than normal, by limiting movement and exposure for players and coaches and others in the most vulnerable group of participants.

J – Juwan Howard leads this year’s (informal) category of “Most Likely to Finish The Job.” Back in the early 1990’s, the Michigan men’s head coach was a prominent player for the Wolverines – part of a group known as “The Fab 5,” which became a cultural phenomenon as well as a successful team. But not successful enough – the team lost consecutive NCAA championship games in 1992 and 93. Now Howard, in his second year as head coach, has the number one seeded Wolverines poised to contend for a title that he just missed winning nearly three decades ago.

K – Get to know Corey Kispert. Because he’s a key component in Gonzaga’s quest to win that elusive national title (see “G”).

L – Men’s basketball fans Lost a lot when March Madness was canceled last season. San Diego State lost the chance to prove its mettle; rising stars lost the chance to finish their rise and position themselves even better for a successful pro career; teams like Vermont or Hofstra lost the chance to possibly become part of tournament lore with Cinderella upsets.

N – Another guard you may not have heard of, Nika Muhl, you probably will have by the end of the women’s tournament. She doesn’t get the publicity of her fellow freshman in the UConn backcourt (see “P”), but the tough, physical Muhl, from Croatia, honed her skills playing several years in her native country’s first women’s basketball league. Her favorite player: former NBA’er Dennis Rodman – assuming she likes him for his maniacal rebounding and defense and not his bromance with Kim Jong Un.

O – One Shining Moment. We really missed it last year. A true March Madness litmus test – if it doesn’t move you, you’re not human.

P – Paige Bueckers is the next great UConn women’s player. And there are many. And she’s already there – as a freshman. Bueckers (pronounced “Beckers”) is only the third first-year player to make the Associated Press All-America team. UConn legend Maya Moore was one of the others. “Name one player that has taken a team this young to where we are today,” her head coach Geno Auriemma said about Bueckers. She has led the #1 nationally ranked Huskies all year, with her scoring…she shoots an amazing 47% from three-point range…and her passing. She loves to pass and it’s one of the reasons why her teammates love her.

Q – The most recent men’s champion, Virginia, has spent the week Quarantining instead of preparing to defend its 2019 title. A positive COVID test forced the Cavaliers to withdraw from the ACC tournament last week. As of Friday morning they were the only men’s team not in Indianapolis. Their first game, against Ohio, is scheduled for Saturday night. After making the trip to Indy, team members still have to be tested twice and test negative before they can practice or play. An NCAA official thinks Virginia will have a chance to practice before Saturday’s game.

R – Rutgers is in the men’s tournament. At long last. It’s been 30 years, or seven head coaches, three conference changes and six U.S. presidents, since Rutgers was part of March Madness. The Scarlet Knights have ended the longest drought of Division 1 high-major men’s basketball programs.

S – Sister Jean is back! In 2018, Sister Jean Dolores Schmidt became an international celebrity…she’s got the letters from Europe to prove it….when she became the most visible and endearing fan of Loyola Chicago as the Ramblers made an unlikely run to the men’s Final Four. The Ramblers are back in the tournament, and 101-year-old Sister Jean, their team chaplain since 1994, is back to cheer them on – within, of course, pandemic limits. She got the ok to travel to Indianapolis, accompanied by a nurse and security. She’s been vaccinated, but won’t be able to hug the players when they leave the court the way she was able to in 2018. She’ll still communicate via phone and hope for a long run. Her bracket has Loyola Chicago making a run to the Elite 8, but that might be tough. It would probably require an early win over number one seed Illinois.

T – Texas will be home to the entire women’s tournament, for the same reasons Indy is for the men. The women’s games will take place in and around San Antonio. In honor of their host city, the women, once again showing more creativity than the men (the WNBA christened its pandemic protected bubble the “Wubble”), have renamed the tournament’s previously geographical regions with the names of San Antonio landmarks: Alamo, Hemisfair, Mercado and River Walk.

U – Upsets. A staple of March Madness. They define the tournaments every year. It’s where a college basketball pundit earns his or her money. And I am broke.

V – Longtime Stanford women’s head coach Tara VanDerveer may not get the attention of a Geno Auriemma and his 11 titles, but she’s got him, and everyone else, in the career wins category. Last December, VanDerveer became the all-time leader in Division 1 women’s basketball, passing another legend, the late Pat Summitt. VanDerveer hasn’t won a title with Stanford since 1992, but the Cardinal enter this year’s tournament, which starts Sunday, as the overall number one seed.

Y – Poor Georgia Tech Yellow Jackets. They drew Loyola Chicago in the first round meaning they not only have to contend with Cameron Krutwig…but also his mustache and Sister Jean.

Z – Alas, no Akron in the men’s tournament. Meaning no Zippy the mascot. Zilch. Zero.

Which is what I’ve got left. Time for basketball.