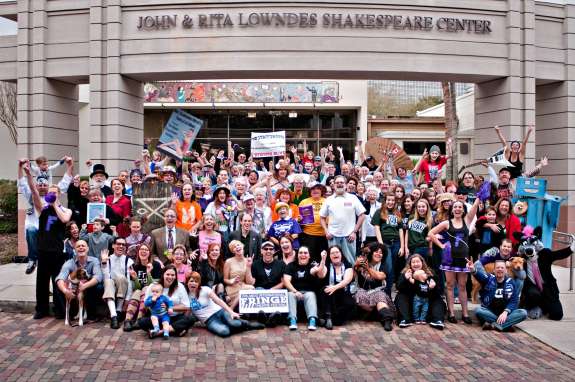 Staff and performers from a previous Fringe assemble for a group photo. Image: Orlando International Fringe Theatre Festival on Facebook

Orlando gets more colorful this time of year, and not because of changing seasons – the Orlando International Fringe Theatre Festival begins today.

The annual two-week festival has come a long way from its start more than twenty years ago, presenting experimental theatre in downtown Orlando’s unoccupied storefronts and warehouses.

Now it’s a cultural institution, with performances by hundreds of local, national, and even international artists centered around the artistic hub at Loch Haven Park.

And it’s still growing. 90.7’s Nicole Creston spoke with festival producer Michael Marinaccio about the arts on offer this year, and the future of “the Fringe.”

Click here to find more information about the Fringe Festival