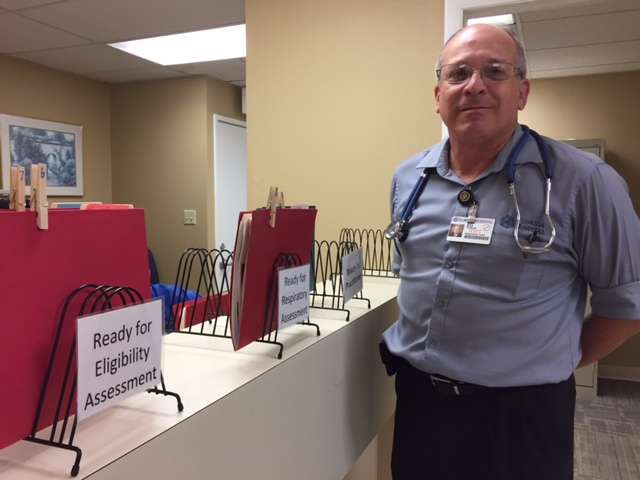 Ed Fluker started a free clinic for patients who have breathing issues but don't have insurance.

Per capita, Osceola County has the worst rates in Florida for asthma hospitalizations and the second worst rate for emergency room visits for asthma.

But a free lung clinic is helping residents breathe easy. There, Tammy Rinkle is being checked out by a respiratory therapist. She’s put on a scale, gets her temperature taken and her blood pressure checked.

And then she has her lungs checked.

“What you’re gonna do here, you’re gonna take as deep a breath as you can, and you’re gonna blow out as hard and fast as you can until there’s no more air,” says therapist Dorothy Partin, explaining how a machine works to measure lung capacity.

Rinkle takes in a breath, breaths out, and then coughs.

First Rinkle had asthma, and now she also has chronic obstructive pulmonary disease, or COPD. And she frequently ends up in the hospital.

“Two to three times a year. Every year. For at least eight, nine years that I remember,” Rinkle said.

Every day in Osceola County, an average of 10 people visit the emergency room because of asthma, and three of them end up hospitalized. That’s where this free lung clinic comes in.

Monday afternoons, they see patients who have been to the hospital for breathing trouble but have no insurance.

Here, the team works with drug companies and suppliers to get patients free medications and equipment to help them with their breathing.

If you don’t have insurance, prices for asthma medications can run $350 to $400 a month – and many patients need combinations of meds.

Ed Fluker is a respiratory therapist who founded this clinic after seeing patients come into his ER, get a breathing treatment and steroids, and be sent out the door.

“But knowing that when they went home they wouldn’t be able to afford the least expensive medicines to prevent their asthma attacks,” Fluker said.

And the clinic works. Patients seen at the clinic make fewer trips to the ER and hospital. Florida Hospital said it has saved more than $5 million in ER bills that were likely to go unpaid.

As a result, Fluker said several more clinics have opened in Central Florida.

“Honestly we’ll have patients who might have been seen in the ER 19 or 20 times prior to the clinic visit, and then after that, maybe once or twice in the next year,” Fluker said.

In Florida, Osceola and Gadsen counties top the state for the rate of ER visits for asthma. What’s interesting is Osceola’s neighbor Polk County has a rate much lower than Osceola. Meanwhile, counties like Sarasota on the west coast do much better.

That may be because it has a lower poverty rate and more people have insurance.

In Osceola County, in the shadow of Disney World, more than 18 percent of the population lives in poverty and more than 1 in 4 don’t have health insurance.

Poverty creates more environmental risks for people living with asthma. And Fluker said there’s less access to the medicines to control it.

“Our folks in these situations are fighting a lot of different battles,” Fluker said.

Fluker sees a need for the clinics because of the distance his patients travel to get free care. And he knows for every person able to make the trip, there are many more who can’t.