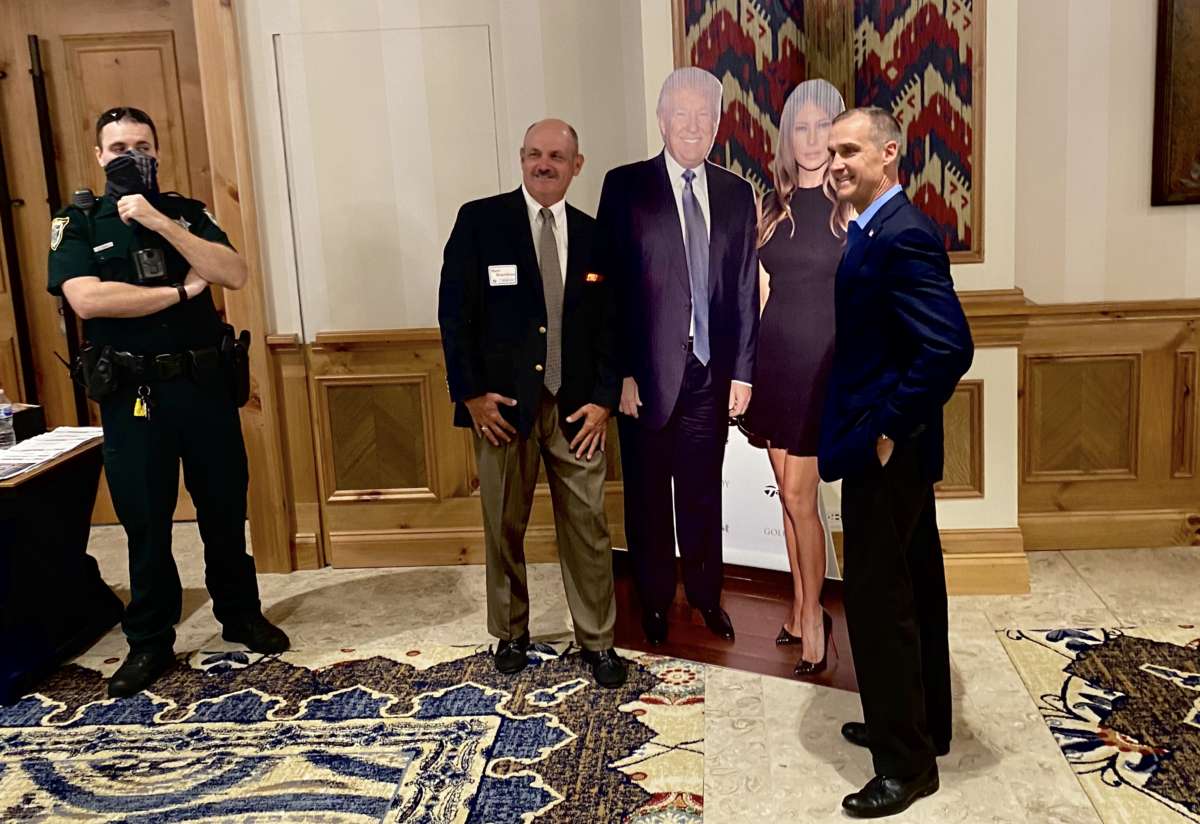 Record numbers of Floridians are expected to vote by mail this year, and Democrats are taking advantage of that option during the pandemic.

But President Trump’s attacks on mail-in voting have discouraged some Republicans in the Villages from doing that.

Those views were evident at a recent Villagers for Trump fundraiser in the traditionally Republican stronghold.

Former Trump Campaign Manager Corey Lewandowski spoke to donors at the Trump Day Dinner in The Villages last Thursday before rushing to Washington, D.C., for a meeting. Photo: Joe Byrnes

About two hundred fifty or so of the president’s supporters filled a ballroom in the Villages for the recent Trump Day Dinner.

They were adamant in their support for him and just as adamant that voting by mail will be riddled with fraud.

“I don’t trust the system,” said Tony Garcia, a retired postal service employee. He thinks Trump will win — if the election is fair.

But he says the postal service is seriously mismanaged with Democratic-controlled unions.

“I don’t trust it. I don’t have any confidence in the system as far as the ballots are concerned.”

So Garcia is changing his approach to voting.

“I don’t believe they should be mailing out ballots to everyone because our lists aren’t that good,” she said. “And I think that’s where the fraud’s going to come in. But I believe one hundred percent in the postal service.”

The president has been tweeting about mail-in ballot fraud  — especially in states where ballots are sent to all voters, not just those who request them.

It’s an allegation the experts have denied. In recent Senate testimony, for example, the FBI director said they have found no national coordinated voter fraud, by mail or otherwise.

“And I think that Donald is going to see a landslide victory in this area,” she said.

In Florida, as she noted, you have to request a mail-in ballot.

“But when you send out mass mailings of voting ballots to people who are dead, gone, moved and nobody ever checks, the potential for fraud is incredible. But that’s the only way they think they can win.”

“I’ve read about 30 something books, about him and also the deep state and the government and everything,” he said.

Clapp objects to universal ballots. But it’s different in Florida, and he is voting by mail.

The Villages, a retirement community of about 130,000 people mostly in Sumter County, tilts Republican.

But Clapp sees some strength among the opposition.

“There is a fair amount of support for (former Vice President Joe) Biden, no doubt about it. Maybe even more than Hillary, which surprised me in a way.”

Overall, voting by mail has increased dramatically in Sumter County in recent years. It doubled in this year’s August primary compared to the primary two years ago.

The president of the Villages Democratic Club says their vote-by-mail effort is, quote, “massive,” that more than half the Sumter County Democrats have already requested ballots.

Their get-out-the vote effort will take a uniquely Villages turn this week with a golf cart parade on Wednesday morning. The Democrats will ride right up the Supervisor of Elections Office and put their ballots in a drop box.