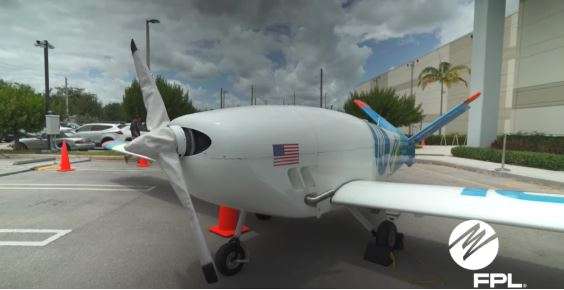 Flower Power & Light's fixed-wing drone FPLAir One at the company's command center in Riviera Beach during a May 12 annual storm drill (via: Florida Power & Light)

Wednesday, Aug. 10 will mark the maiden voyage of a new large-scale drone that Florida Power & Light plans to use to better assess damage and restore power more quickly after a hurricane.

At first glance, the $1.2 million FPLAir One more closely resembles a small airplane than a typical drone. The unmanned fixed-wing aircraft has a wingspan slightly longer than that of a Cessna, can weigh up to 1,800 pounds and can fly 1,000 miles for more than 20 hours in a single deployment – That’s more than flying the entire length of Florida twice.

FPL’s Technology and Innovation Manager Eric Schwartz, who leads the company’s drone program, said the FPLAir One will help to more quickly appraise damage after a storm because it can fly through areas even before ground crews are able to safely go in.

“The FPLAir One has the capability because of the long flight time to be able to take off in an area that is perfectly fine weather-wise like on the east coast of Florida, and then can travel behind the storm and start following the storm along,” said Schwartz.

“With the FPLAir One, we’ll be able to see areas that are flooded, maybe bridges that are out in a roadway. So, logistically we can travel and move our crews around the state much safer, faster, and better for a better response time for our customers.”

Unlike other drones in the company’s fleet, the FPLAir One can fly in volatile weather conditions including tropical storm force winds.

Aside from assessing damage after a storm, Schwartz said the new fixed-wing drone can be used as a proactive tool.

“The goal is in a blue sky like a day like today, our goal is to use the censor package that we’ve been developing on FPLAir One to create a three-dimensional grid, or a three-dimensional mirror image of our current grid. And we’ve been working on image recognition and change detection for the past handful of years at the company, and so the idea is to be able to do multiple passes a year with the FPLAir One during blue sky, which also helps us set up that process for storm as well.”

Wednesday’s flight from a site in Palm Beach County will mark the first for a large-scale drone flown for commercial use outside of Federal Aviation Administration test sites.