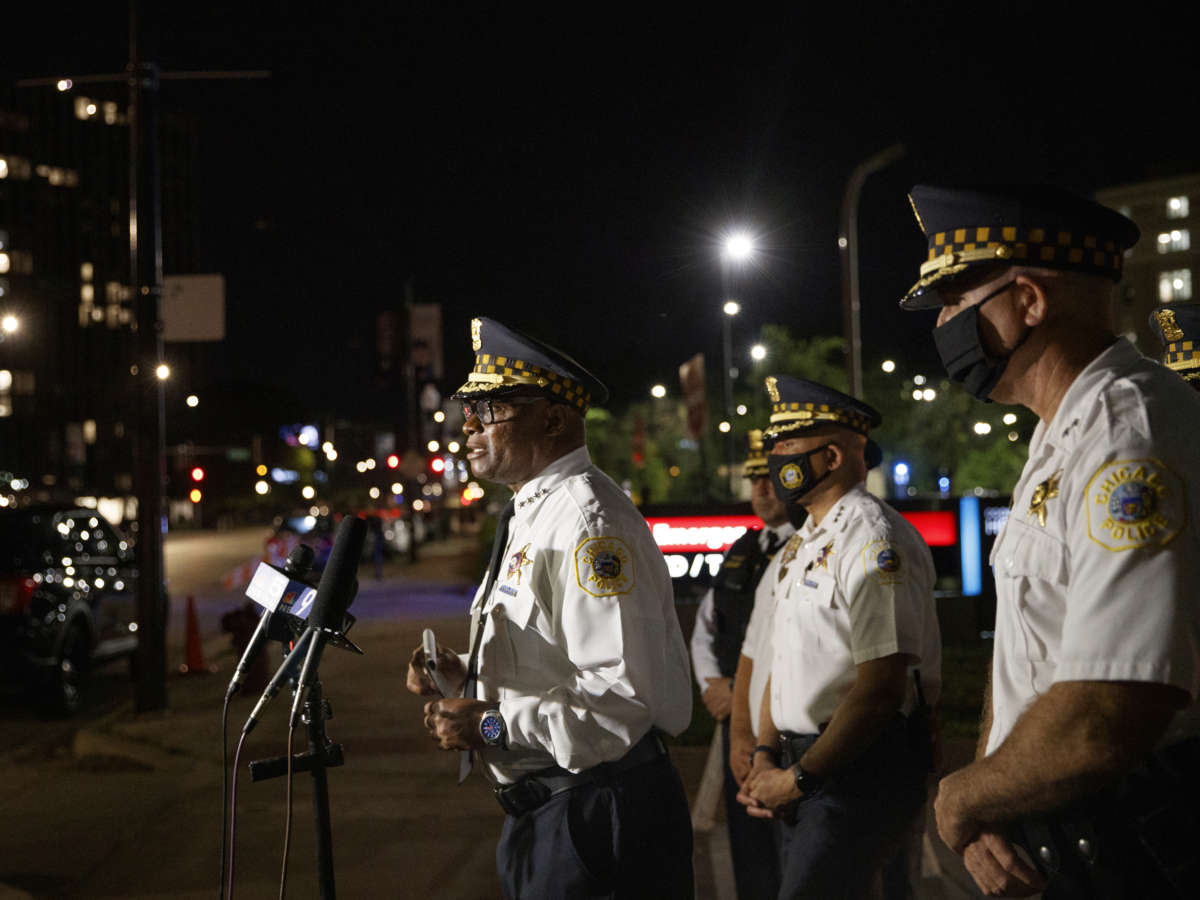 Chicago police Superintendent David Brown talks with members of the press outside Stroger Hospital where two officers were brought after being shot during the Fourth of July holiday weekend.
Image credit: Armando L. Sanchez

More than 180 people were killed in shootings across the country over the Fourth of July holiday weekend, according to data compiled by the Gun Violence Archive and reviewed by NPR.

By 11:30 p.m. on July 5, the Gun Violence Archive reported 189 people killed and 516 injured in shootings over the course of a 72 hour period starting July 2. In total, there were more than 540 shootings over the holiday weekend, the organization reported.

Those numbers may increase as the organization continues to collect statistics from the weekend.

News of major shootings in Chicago, Texas, Virginia and Ohio comes as many of the nation’s largest cities are struggling to contain a continued rise in violent crimes. Officials from across the country had spoken of serious fears of a bloody summer earlier this year.

Albany, N.Y., Mayor Kathy M. Sheehan told the Washington Post in May that her city was experiencing a rise in gun violence. At the time she said, “I’m really worried,” of the approaching summer months.

Some major cities faced similar concerns with violent crime last summer as they do this year. In 2020, nearly 90 people were shot in Chicago over Independence Day weekend and 17 of them died.

Similarly in Georgia, Gov. Brian Kemp activated National Guard troops after a spate of shootings and protests in Atlanta. Five people died, including an 8-year-old girl, and at least 30 people were injured during the long holiday weekend last year.

Dozens shot in Chicago, including police

The Chicago Tribune reports at least 95 people were shot in the city during the long weekend.

Among those injured were two police officers for the Chicago Police Department. The two were shot and suffered non-life threatening injuries when they attempted to break up a crowd following Fourth of July gatherings.

The shooting occurred at approximately 1:45 a.m. on the city’s West Side, according to the Associated Press. It happened less than an hour after a separate drive-by shooting in Washington Park on the city’s South Side left two people dead and four wounded.

A statement from police said they had responded to several large groups in the city, resulting in multiple arrests.

“There’s been a lot of large crowd gatherings tonight, a lot of celebratory fireworks going off, kind of spontaneous,” police Superintendent David Brown said during a press conference. “They were dispersing a crowd when they heard shots and felt pain.”

In addition to the officers; a 6-year-old girl and her mother were shot. The Chicago Tribune also reports at least 16 people died from injuries suffered from shootings that spanned from about 5 p.m. Friday to 8 p.m. Monday.

Brown said on Twitter that at least 33 officers in the city have been shot at or shot in the line of duty this year.

Brown also shared online that the Chicago Police Department recovered over 6,100 guns over the weekend — a 26% increase from the same period last year.

Children hurt in shootings in Virginia and Ohio

Norfolk Police have charged a 15-year-old boy in the weekend shooting of four children between the ages of 6 and 16 on July 2.

In Ohio, a 17-year-old boy was killed after a block party was disrupted by gunfire in Toledo early Monday, according to police. At least 12 people were hurt in the shooting.

Toledo Police Chief George Kral said at a news conference Monday that officers received a call at 12:24 a.m. for a man shooting into the air and 300 people fighting in the street in the area of Lawrence Avenue near Wall Street in the city.

Two people — a 51-year-old man and a 19-year-old — are still in critical condition, according to WTOL11.

“We should be angry,” Kral said. “We need to come together as a community. We’ve seen violence like this in this country all year long, and now it’s hit home.”

8 are shot after an argument in Fort Worth

At least eight people were shot and injured after an argument broke out at 1:30 a.m. on July 4 in Fort Worth, Texas. Police reported finding several victims near a car wash. They were all transported to nearby hospitals and are said to be in stable condition.

According to police, the shooting began after one man left the group during a fight, returned to the scene with a gun, and started shooting at the group. Others then began returning fire. Police said most of the victims are simply bystanders caught in the crossfire.

Elsewhere in Texas that same day, five men were found shot in Dallas. Three of the victims were later pronounced dead. Dallas Police said there are currently no suspects identified or apprehended.