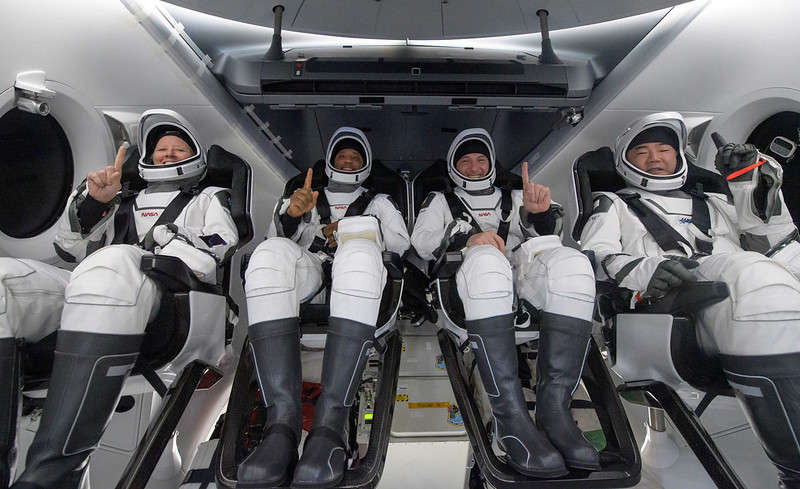 NASA astronauts Mike Hopkins, Victor Glover and Shannon Walker, along with JAXA astronaut Soichi Noguchi splashed down off the coast of Panama City, Florida in the Gulf of Mexico.

“Dragon, on behalf of NASA and SpaceX teams, we welcome you back to planet Earth and thanks for flying SpaceX,” said SpaceX mission control. “For those of you enrolled in our frequent flier program, you’ve earned 68 million miles on this voyage.”

“I would just like to say, quite frankly, y’all are changing the world,” said commander Mike Hopkins to the SpaceX team.  “Congratulations. It’s great to be back.”

It took the Crew-1 astronauts about six hours to make the trip back. Their Crew Dragon capsule name Resilience faced temperature around 2,500 degrees Fahrenheit as it re-entered the atmosphere. Four parachutes slowed its final decent into the Gulf of Mexico.

Once the capsule splashed down, it took less than one hour to scoop it out of the water and get the astronauts out of the vehicle. “It looked more like a race car pit stop than anything else,” said SpaceX’s Hans Koenigsmann. “Everything, everybody was at the right spot and right time.”

After landing, the crew took a helicopter to Florida before grabbing a plane ride back to Johnson Space Center in Houston, Texas.

“They’re doing great. We’re very happy that will be bringing them home to their families,” said NASA’s Kathy Lueders, head of the agency’s human spaceflight program.

The astronauts will spend some time in astronaut quarantine facilities at Johnson Space Center adjusting to life with gravity.

“They are monitored by our flight doctors after they’re returned,” said Holly Ridings, chief flight director at Johnson Space Center. “They go straight into an exercise protocol that helps them recover quickly.”

The crew spent the last six months on the station, performing hundreds of science experiments and performing maintenance on the orbit lab including spacewalks to upgrade the station’s power and cooling systems.

The mission was the first operational flight under NASA’s Commercial Crew program, an effort to launch astronauts from the U.S. by private companies. SpaceX launched the crew in it’s privately developed and built Dragon Capsule back in November.

The crew’s return was the first nighttime splashdown of a U.S. crew capsule since Apollo 8, back in 1968.