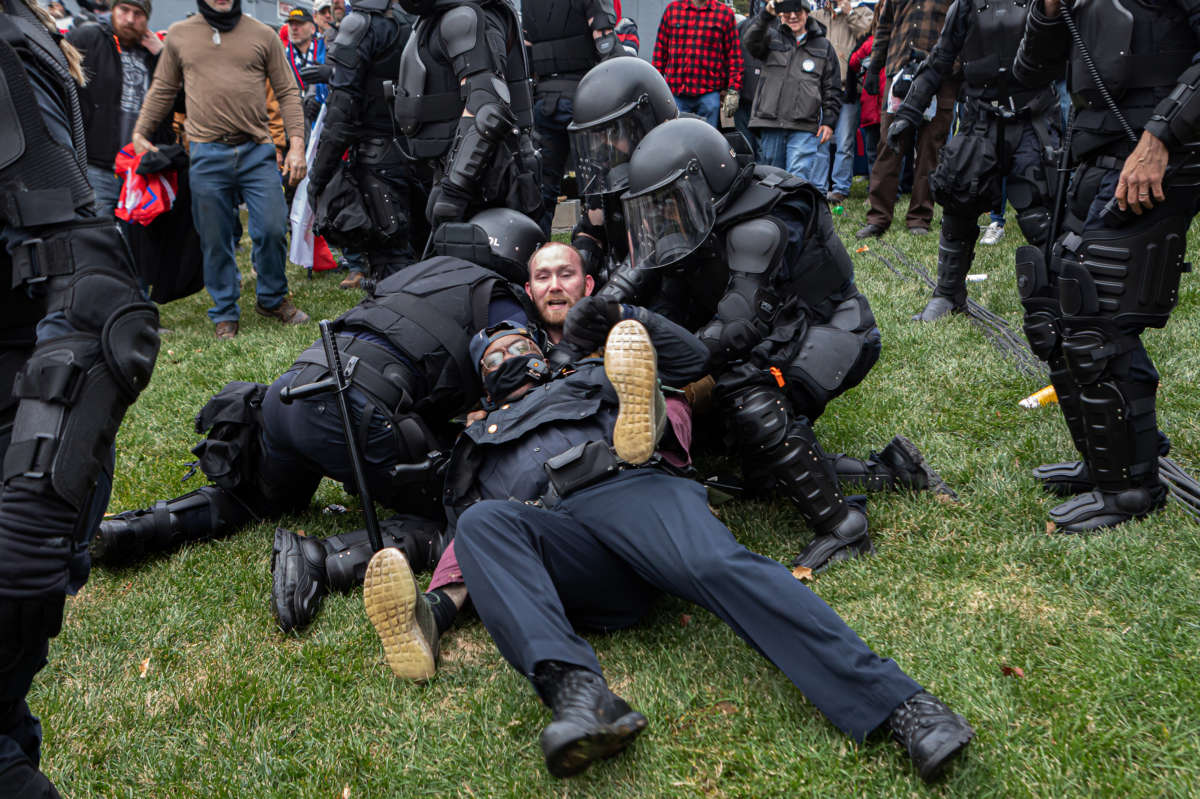 A Pro-Trump protester resists arrest on Wednesday. Hundreds breached the U.S. Capitol Building but there were few arrests in relation to the scope of the unrest as of Wednesday night
Image credit: Michael Nigro

Washington, D.C., officials say four people have died, including one in a fatal shooting inside the U.S. Capitol, and more than a dozen police officers were injured after a mob of supporters of President Trump stormed the nation’s legislative building, temporarily shutting down a vote to certify his successor.

The scenes of chaos Wednesday afternoon as a Trump rally devolved into unrest and insurrection left the nation shaken and the nation’s capital on alert.

D.C. Mayor Muriel Bowser, who put the city on a strict 6 p.m. curfew, described the day’s events as “shameful, unpatriotic and … unlawful.”

Numerous videos shared online showed how the noise of protesters could be heard from inside the Senate and House chambers. In an hours-long siege, the rioters went on to tear through the building, breaking windows, attacking police, and ransacking lawmakers’ offices. Lawmakers, staffers, reporters, and other Capitol building workers were forced into hiding while heavily armed police and FBI agents rallied a response.

D.C. officials said one woman was shot by a Capitol Police officer amid the chaos. Three others died after separate medical emergencies, she and D.C. Metropolitan Police Chief Robert Contee said during a news conference.

Contee also reported 14 police officers were injured, one seriously “after he was pulled into a crowd and assaulted.” Two officers remain hospitalized as of late Wednesday, he said.

The violence wasn’t directed solely at the U.S. Capitol building. Police also responded to reports of suspicious packages discovered on Capitol grounds and in other areas of the city. Two pipe bombs left at the Republican National Committee and the Democratic National Committee were discovered by police and safely detonated, police said.

In a car on Capitol grounds, law enforcement found a drink cooler full of gasoline bombs and a long gun, Contee told reporters.

The FBI confirmed to NPR that the agency is involved in ongoing investigations and said, “two suspected explosive devices were rendered safe by the FBI and our law enforcement partners.”

Acting U.S. Attorney General Jeffrey A. Rosen called the siege at the Capitol building “an intolerable attack on a fundamental institution of our democracy.”

The Department of Justice dispatched “hundreds of federal law enforcement officers and agents” to assist the Capitol Police, Rosen said.

Yet, there were few arrests in relation to the scope of the unrest as of Wednesday night, despite clear evidence on video of hundreds of rioters gaining access to the Capitol and damaging government property.

There were approximately 52 arrests as of 9:30 p.m. ET — most related to curfew violations, Contee said.

Four people were arrested for carrying pistols without licenses, and one for possession of a prohibited weapon.

Protesters that violated Bowser’s 6 p.m. citywide 12-hour curfew were largely dispersed from the Capitol grounds or arrested by late Wednesday.

Contee said not all people that gained entry into the Capitol building were taken into custody.

D.C. police will be releasing information later Thursday asking the public’s help identifying individuals who breached the Capitol so that they “can be held accountable,” he said.

It’s unclear whether Capitol Police arrested additional suspects that infiltrated the capitol and have yet to report those arrests. A representative for Capitol police didn’t immediately respond to a request for information.

Videos taken of the chaos appeared to show at best an unprepared police force easily overrun by rioters and at worst, one that appeared to acquiesce to the mob. Unverified videos shared on social media showed a police officer taking selfies with some rioters that entered the Capitol and another appeared to show officers moving barricades to allow a large crowd of people to approach the building.

Capitol Police officers, which usually number around 2,300, have jurisdiction over Congress and its grounds. According to D.C. law, Metropolitan Police can only make arrests on Capitol grounds with the consent or at the request of Capitol Police.

A review will begin immediately to determine how security at the Capitol was compromised, Bowser said.

“I’m sure we’re going to spend a lot of time working with our partners including in leadership about the security of the building. We are focused however right now on making sure the members can do their work,” Bowser said.

Lawmakers already promised a full investigation into the actions by Capitol Police Wednesday.

California Democrat Rep. Zoe Lofgren, chairwoman of the House Administration Committee, said the breach “raises grave security concerns.” She said her committee would work with bipartisan House and Senate leadership to address concerns and review the response in the coming days.

The FBI has set up a tip line website for information tied to the riots. The agency said it’s seeking information to “assist in identifying individuals who are actively instigating violence in Washington, D.C.”

Hours after Trump’s supporters laid siege to an entire branch of government with the apparent aim of keeping him in office in defiance of results of the Nov. 3 election, the president issued a statement early Thursday morning that conceded “there will be an orderly transition on January 20th.”

However, that promise came too late for several top advisors at the White House, who cited the president’s response to the siege as the reason for their departure. Some advisors resigned from their posts, with less than two weeks to go in their jobs.

Some lawmakers, including Rep. Ilhan Omar (D-Minn.) and Rep. Alexandria Ocasio-Cortez (D-New York) have called for Trump’s impeachment for his “open sedition.”

It’s unlikely to gain enough support to be done before Biden’s inauguration on Jan. 20.