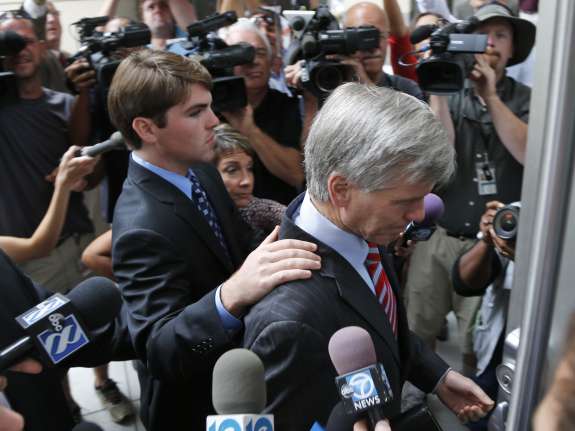 U.S. District Judge James R. Spencer said McDonnell must report to prison on Feb. 9. Spencer said he was moved by the support for the former governor, but “a price must be paid. Unlike Pontius Pilate, I can’t wash my hands of it all. A meaningful sentence must be imposed.”

Earlier, McDonnell addressed the court, asking that Spencer show him and his wife, Maureen, mercy.

“I stand before you a heartbroken and humbled man,” he said.

The sentence could be seen as a victory for McDonnell’s attorneys. Prosecutors had sought a range of at least 10 years and one month to as long as 12 years and seven months in prison for the acceptance of bribes totaling $177,000 while McDonnell was governor. Spencer had earlier lowered the recommended sentence to 6 1/2 to 8 years.

McDonnell’s attorneys had asked for community service rather than prison time. The former governor is expected to appeal today’s sentence.

Virginia’s former governor and his wife, Maureen, were convicted in September of multiple counts of corruption stemming from a relationship with Jonnie Williams, the CEO of Star Scientific. The couple accepted money, expensive gifts and vacations from Williams in exchange for government favors as Williams sought to market his company’s dietary supplements. The Washington Post listed several of the gifts, which included a Rolex watch, a shopping trip in New York City, wedding catering for the McDonnells’ daughter Cailin and several golf outings for the couple’s sons on a private jet.

Defense attorneys had argued for a sentence of 6,000 hours of community service based on, among other things, McDonnell’s service as governor and what they argued was his acceptance of responsibility for the offenses. The prosecution counters that McDonnell’s case should serve as an example of political corruption and its consequences.

The Richmond Times-Dispatch reported that the defense submitted a 29-page memo asking that the former governor be allowed to remain free pending an appeal.

Maureen McDonnell will be sentenced separately on Feb. 20.