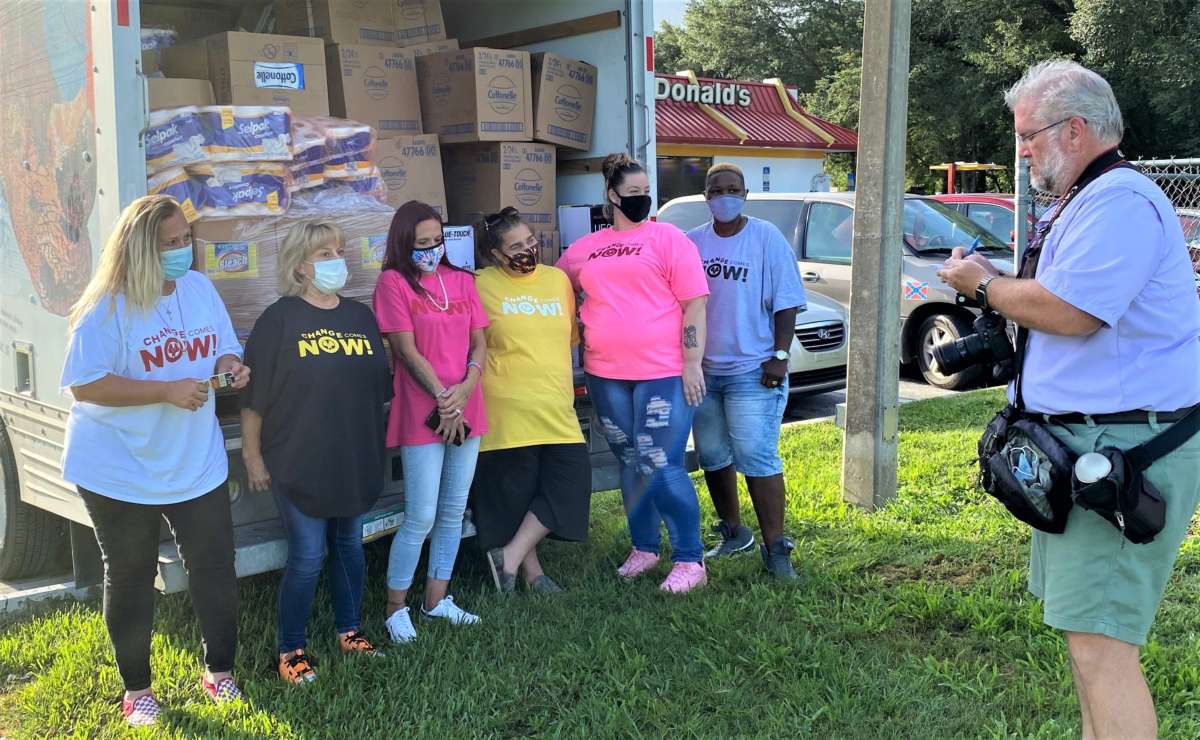 A coronavirus outbreak has infected more than 1,200 inmates at two prisons in Marion County.

More than 50 staff members have tested positive, as well.

Lowell Correctional Institution, Florida’s largest women’s prison, has lost two inmates with the virus. And one woman from the nearby Florida Women’s Reception Center has died of COVID-19.

Now a group of former inmates that previously protested outside Lowell has donated a truckload of soap, bleach, hand sanitizer, gloves, toilet paper and five televisions.

In an email, Florida Department of Corrections officials said: “While there are no shortages of supplies at our facilities, FDC is appreciative of all donations from the public.” Anyone wishing to arrange a donation of approved supplies should reach out directly to the warden.

The organizer of Friday’s effort, prison reform advocate Debra Bennett, spoke with me.

We stood behind the fully loaded U-Haul truck around 8:30 Friday morning in a McDonald’s parking lot north of Ocala. The next stop would be the Lowell prison.

BENNETT: We are a nonprofit called Change Comes Now. We are made up of all formerly incarcerated women.

I have 12 board members — everybody’s formerly incarcerated. All of the volunteers that you see here right now, everybody’s slept at this prison, everybody slept at Lowell before. Most of us slept at Homestead, where we made four trips to.

We’re doing this because we care. You have an administration that sometimes feels like our life is devalued when we walk in those doors. It’s not true. It’s still somebody’s mom, daughter, sister, friends.

We’re very blessed. We’re very happy that this administration is allowing us to help. This was something that I never thought would happen and we talked about when we made our trips down to homestead … we wanted to come to Lowell. Lowell didn’t have the numbers so they wouldn’t talk with us. Now it’s a problem and we’re able to help, but we know what the women need.

WMFE: Tell me a little bit about the group, your nonprofit that’s involved in this.

BENNETT: We’re called Change Comes Now. We began by advocating for the women in prisons that have been sexually abused, physically abused. A lot of it started with Cheryl Weimar. She was paralyzed last August 21st. She’s still to this day a quadriplegic. Almost a year later, there’s still been no arrest.

So we’ve been just trying to educate the public, and let them know that these are things that are happening. Not really going to see it on TV, but this happens on a daily basis. And that’s really what our big change was — we wanted to reform the way that people are treated in prison.

But with the COVID-19 crisis, she says, they’ve had to shift gears.

We’ve had to reorganize and shift, because these women are dying. We lost two women at Homestead. And we’ve lost three women here.

WMFE: What are you hearing about what they’re experiencing personally.

BENNETT: They have a whole different level of fear in there. Medical inside prison is horrible on a good day. So I got an email — I think that you guys saw — I have a young lady who has cancer, and she’s going through chemo, and she’s positive. So, I mean, if you’ve even watched one news report you know that that’s just not a great thing. So they know this.

WMFE: Tell me a little bit about how you got these supplies and how you’re going to manage to distribute them to the prison.

Debra Bennett left the U-Haul before it turned in at Lowell CI. She said the acting warden told her the donations were welcome but that Bennett herself, who has protested outside the prison, was not allowed on the property. Photo: Joe Byrnes

BENNETT: Everything in this truck, all of these supplies, everything came from formerly incarcerated women or parents that are impacted by the criminal justice system because their child’s here. Every single penny.

So you’ve almost $9,000 worth of stuff in here. I wish they would let us go on the compound and pass it out. Can you imagine? … Yeah, that would be awesome. But we’re just gonna have to pass it over to the administration at Lowell, and then they’re going to search it like they would search it if it came from a church. Everything is in its packaging. Nothing’s been opened. And the acting warden, Mr. (Michael) Quimby, gave me his word that everything in here is going to hit the compound, except for the, except for the hand sanitizer and the gloves. That’s going to be used for staff to try to continue to keep them safe.