Former inmates are cooking up some of Philly’s best pizza 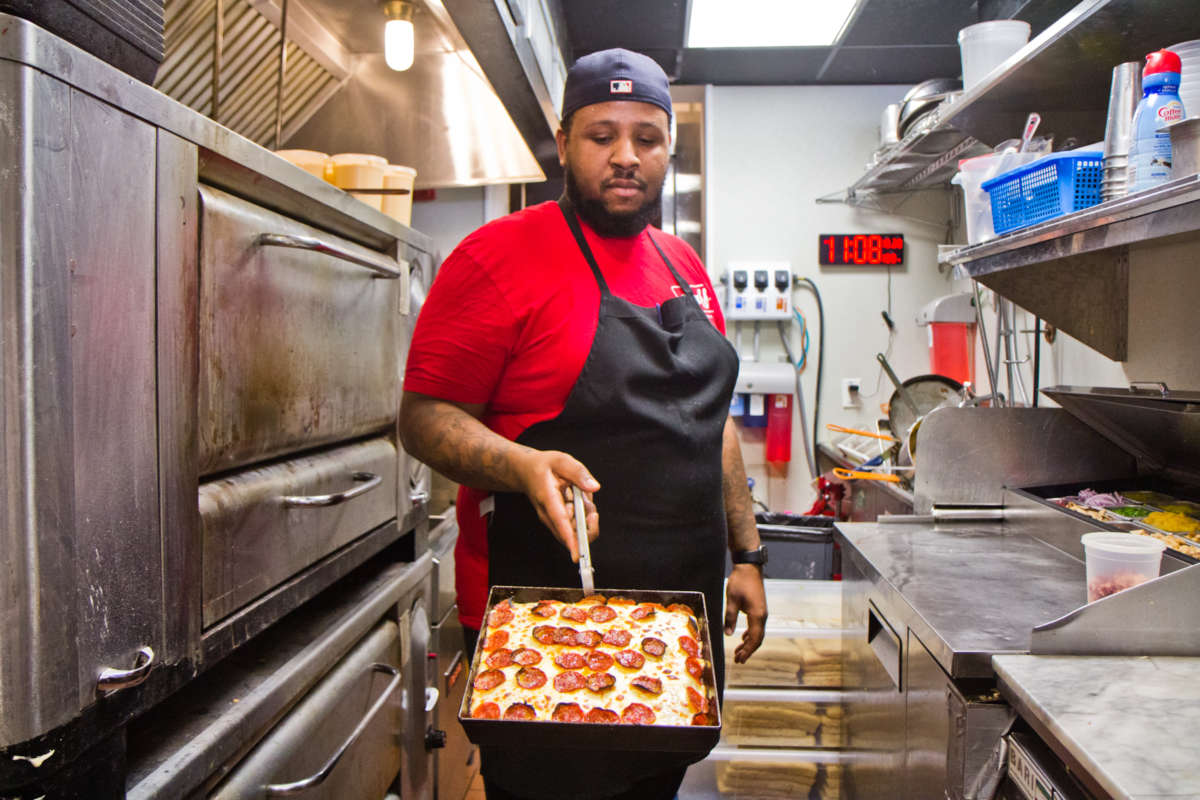 Down North Pizza employee Miles Jackson presents a pie from the oven.

Philadelphia’s Down North Pizza has quickly made national best-of lists for its Detroit-style square pies.

The buzz is so big that the bestseller often changes depending on what was recently featured in the press, said executive chef Michael Carter.

“Because of The New York Times, it’s been the Uptown Vibe,” he said. That’s the shop’s vegetarian pie, laden with julienned peppers, sauteed mushrooms, kale, red onions, and their spin on tomato sauce, called “norf” sauce: A secret recipe that is sweet, spicy and smoky.

But that runaway success is built on a mission: to hire formerly incarcerated people, and convince other employers to do the same.

“We have over 60 years of jail time in the kitchen,” said owner Muhammad Abdul-Hadi. “We are all living proof that you can build a business around the formerly incarcerated.”

Each year, approximately 600,000 people leave state or federal prisons, according to the U.S. Department of Health and Human Services. Around 9 million people spend time in jail.

Philadelphia has had one of the highest incarceration rates in the nation. Down North Pizza is in a neighborhood that sees 1,000 people return from prison annually, according to the Philadelphia Reentry Coalition.

Like everyone who works at Down North, Carter spent time in prison – 12 years total starting at age 16. He later went to culinary school and eventually found success in restaurants, but Carter credits his time upstate with teaching him about mass production.

He now uses his own story when urging employers to hire people who’ve been behind bars. But when he was released, he had to hide that experience when applying for jobs.

Finding work is a struggle

To break the cycle of incarceration and stigma, Down North Pizza tries to model just working conditions.

First, pay starts at $15/hour. Sous chef Jamar Johnson said even with food industry experience under his belt, his record often meant he got undervalued.

“I done recently worked for a company where, which I’m not going to say the name out loud, but the dishwasher made more than me,” he said.

Second, provide support. The two apartments above the restaurant are available for staff to live in. Formerly incarcerated people often struggle to rent housing, due to discrimination and lack of references.

There’s also a pro bono attorney available if an issue comes up with the terms of their release. Parole violations are a way people get swept back into jail, even without committing a crime.

Finally, the staff is a natural support group, and employees no longer have to hide their pasts at work.

“I feel like what we’re doing here is like a testament to our story,” said sous chef Myles Jackson. The mission has helped give him purpose, he said.

On a recent Friday night, a steady stream of customers moves in and out of the shop’s small storefront. Many customers say they traveled from across the city because they heard about the food.

Keith Wiggins lives just around the corner He was drawn in after seeing the lines.

Wiggins did not know about the mission, but said it resonates with him. His son is serving a long prison sentence in central Pennsylvania.

“Who knows, maybe he’ll come out and get hooked up with something like this … Maybe I could take him under my wing,” said Wiggins, who has his own photography business.

Either way, he said he’s glad to see a thriving, Black-owned business in his neighborhood, that’s shining a positive light.