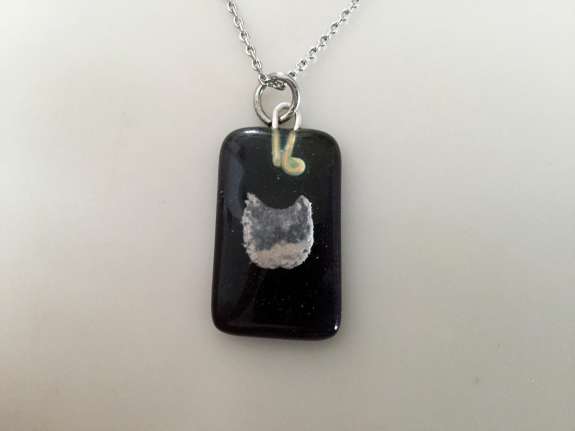 Meet Michelle Palenik, an artist who creates jewelry with the cremated remains of loved ones.

Inside her studio in a two-car garage north of Tampa, Michele Palenik sifts through plates of colored glass. She’s looking for the perfect shade of green for a necklace pendant using cremated ashes.

“I know I have a nice, lighter green,” she says as she hunts.

She cuts the glass into a circle with a handheld tool, and taps the edges and a small circle pops out. Palenik used to focus on making gold jewelry. Her husband, a funeral director, urged her to make art using cremated remains.

She was a bit squeamish at first. And even her husband Marty wasn’t always sold on the idea of wearable urns.

“I thought the whole concept of that was kind of ludicrous,” Marty said. “I thought who’s gonna want to wear mom and pop around their neck. I thought, ‘that’s not gonna work.'”

But Michele has now made the jewelry for 13 years. And she gets several requests a week to make them.

Michelle Palenik puts the jewelry into a kiln to make necklaces with cremated remains.

And jewelry isn’t the only way unique way people remember their loved ones. Michael Nicodemus is the vice president of cremation services for the National Funeral Director’s Association.

He said urns used to be the only place for cremated remains. Not anymore.

“Bird baths, wind chimes, sun dials, pyrotechnics.,” Nicodemus said. “Who would have ever thought of this 15 or 20 years ago? Abstract paintings with cremated remains mixed into the paint and so on.”

Those who chose a traditional casket burial spend about $7,000. A service that includes a cremation costs about a third of that.

Nicodemus notes that cremation is cheaper and more environmentally-friendly.

“Almost 80 percent of all Floridians by the year 2030 will be cremated,” Nicodemus said.

Not all Michele’s customers feel comfortable telling people what’s hanging around their neck. Nelson Jantzen, 77, ordered a necklace after his wife, Diane, died. For the past five years, everywhere Jantzen goes, Dianne does, too.

Dianne’s ashes are nestled in the rectangular glass pendant in the shape of a cat’s face.

Nelson Jantzen, 77, shows a picture of his deceased wife Dianne. Her remains were made into a necklace.

“I asked my present wife if she minded if I had it made, of jewelry with the ashes,” Jantzen said. “And we love cats, so Michele made me a beautiful onyx looking one with a cats face and ears, which is the ashes.”

Jantzen likes that the jewelry is not as obvious an urn atop a mantle. Only close friends and family understand the necklace’s significance, but Jantzen takes comfort in knowing a part of her hangs close to his heart.

“She’s not completely done away with, forever and ever,” she said. “There’s part of her still here.”

Back in her studio, Michele Palenik pours a tiny mound of ashes onto the green glass. She presses the ashes into shapes like hearts or swirls or even teddy bears. She says it’s whatever the family wants.

She said the jewelry is a tangible reminder that their loved one is still around in some form. It’s another way to work through the tears.

“I think people need that closure, the need to feel close,” Palenik said. “Maybe having that person memorialized in a piece of jewelry is something you can see and feel in touch every day, its gives you a more visceral experience.”