For Vietnamese, Heritage Endures At Places Of Worship 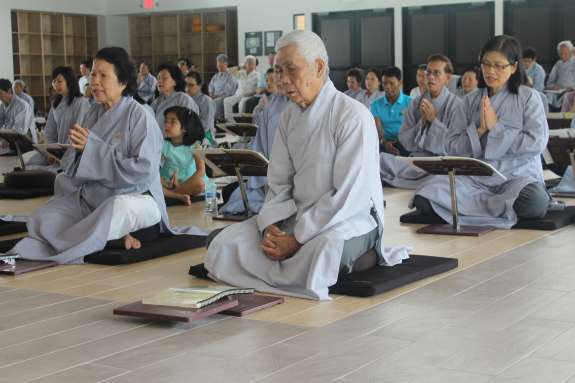 The community is growing even as its cultural heart Little Vietnam is evolving.

90.7 discovered where Central Florida’s Vietnamese community is less affected by the challenges of time and distance, places of worship.

Two rows of monks and nuns sit in meditation before a golden Buddha. Their legs are crossed, heads are bald, and they’re dressed in mustard-colored robes. A nun sings in Vietnamese.

The singing sounds mournful, haunting. But the words are joyous.

“The dharma bodies is bringing morning light. In concentration our hearts are at peace. A half-smile is born upon our lips. This is a new day. We vow to go through it in mindfulness.”

I’m among about 100 Sunday worshippers at Phap Vu Temple.

The temple is Central Florida’s largest for Vietnamese, and it’s difficult to imagine a more authentic example of the culture. Rows of worshippers sit in meditation, dressed in slate-colored robes. Prayers and songs are in Vietnamese. I’m the only American, along with a University of Central Florida student studying Eastern religions.

Cindy Nga Pham is among the members. She immigrated to the United States in 1979. She says her family’s decision to leave Vietnam was grounded in their Buddhist faith. She describes their journey as a detour around conflict and anger.

The temple began in 2002 as a small gathering in someone’s living room and grew quickly, completing construction last year on a new worship hall. For children it offers Vietnamese language, dance and karate classes. Eventually the temple wants to reach beyond the region’s Vietnamese community and offer meditation and yoga classes in English.

A monk who goes by the single name of Can helps me through the service by translating.

Buddhism is the country’s dominant religion, and in Central Florida its followers are spread among a half-dozen temples.

But the region’s largest place of worship for Vietnamese is St. Philip Phan Van Minh Catholic Church, which draws about 1,400 on Sunday. Here choruses of hallelujah mingle among songs, chants and prayers in Vietnamese.

“Immigrants will find the familiarity first. So they would come to where they know the most, their own culture. And once they are comfortable with their own culture they will start venturing out into the world, into other cultures. And so the church would help them with that.”

Nguyen left Vietnam the day Saigon fell with his mother, brother, sister and their families. He was 15. The family boarded an American freighter.

“There were a lot of people coming to the ship to be picked up. And then I remember half of them got left behind because for some reason the ship just cut off the rope and took off, leaving half of the families on the boat and the other half on the ship.”

“If you don’t do anything they will learn American culture very quick because that’s what they face every day. However we bring them in to show them that this is the beauty of the culture. It’s who we are.”

Brittney Phan, 14, and her 9-year-old sister Angelina perform during a recent service.

The girls spent two weeks practicing because Angelina says the song is in Vietnamese rather than English, her first language.

“My mom, she helped me like practice doing the solo with my sister, and we practice like every single night.”

For children like Brittney and Angelina the church offers Vietnamese language classes. Brittney likes them.

“Mostly because it like helps me more when I’m talking to my family, like the older people. I know what they’re talking about, and I can engage in conversation with them.”

“Because first thing we want to practice our faith, and that’s the reason we come to this country. Because if we had stayed in Vietnam the communists don’t let us the freedom to go to the church.”

Forty years after the fall of Saigon he worships every Sunday with his wife and daughter at St. Philip Phan Van Minh Catholic Church.