For Trump supporters at Villages rally, COVID-19 was handled ‘perfectly’ and overblown 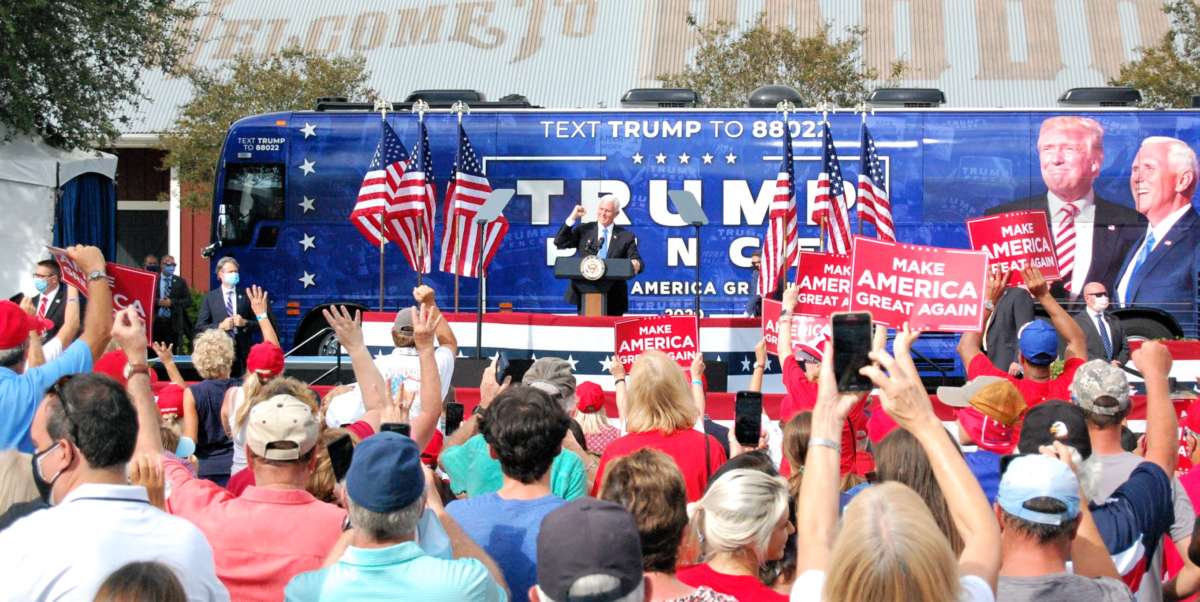 More than 214,000 Americans have died with COVID-19, and President Donald Trump himself is recovering from it.

But Trump supporters at a campaign event on Saturday in The Villages said his administration has handled the virus well and that, by and large, the issue is overblown.

President Trump is expected to campaign in Central Florida himself Monday evening. He’ll rally in Sanford — where he was set to appear just over a week ago before his coronavirus diagnosis intervened.

A thousand or so Trump supporters filled a fenced area in a parking lot to hear Vice President Mike Pence speak. There was little room for social distancing. Some wore masks. Many did not.

Pence spoke for an hour and 35 minutes on issues from military funding and religious liberty to taxes and border security.

He spent about five minutes on the deadly pandemic.

In three short years, we made America great again,” Pence said. “It’s true. And then the coronavirus struck from China.”

Pence focused, as Trump often does, on the travel restrictions he imposed at the end of January.

“President Trump’s decision to suspend all travel from China bought us invaluable time to stand up the greatest national mobilization since World War II, and it saved countless American lives.”

He did not talk about the need for social distancing and mask wearing — which are key public health measures that will reduce the number of infections and deaths.

Or the horrific death toll. Or the increasing case counts and rising concern in many states.

He took a more optimistic approach.

“Because of the cooperation of the American people and the leadership of our president,” Pence said, “we’re slowing the spread, we’re protecting the vulnerable and we’re saving lives, and we’re opening up America again.”

So how do the voters who were there feel about the virus and the administration’s handling of it?

Villages retiree Marcella Raffenaud and her husband sat in folding chairs near the stage, waiting for Pence to arrive. They wore masks and were about six feet apart from other rally-goers.

“I think,” she said, “if you do what they’re telling you to do: wear your mask and distance yourself, wash your hands when you get out of there or carry hand sanitizer — we’ve been fine through this whole thing since March.”

Gail Moore and her husband had traveled up from St. Cloud. She said Trump has handled the virus, quote, “perfectly.” It is real, she said, but overblown. And she blames the Democrats for making the president sick.

“I believe that was manufactured,” Moore said. “I believe they did that to him. I believe without a shadow of a doubt that they infected our president.”

There is no evidence to support that theory.

For Vietnam veteran Michael Grinder, the economy is the big issue. He said Trump is working to get it back on track.

He said the pandemic has been handled well but there’s been a learning curve.

As for Trump’s illness, Grinder sees a silver lining — a focus on the therapeutics he received.

“It’s going to be up to the medical professionals and the scientists to decide that,” Grinder said, “but President Trump provided a good insight into what worked and how quickly it worked.”

Ormond Beach resident Sheona Hill wore a T-shirt that she designed with the words “Socialism Distancing.”

Hill was not wearing a mask.

“If we don’t want to infect or have the possibility of infecting someone, we don’t go around them,” Hill said. “But, it’s our right to choose how we’re going to be seen. Covering up our faces is just another mark of seeing what they can do to control us.”

After the rally, hundreds of people crowded together at the exit to cheer loudly as the large blue campaign bus left the parking lot.