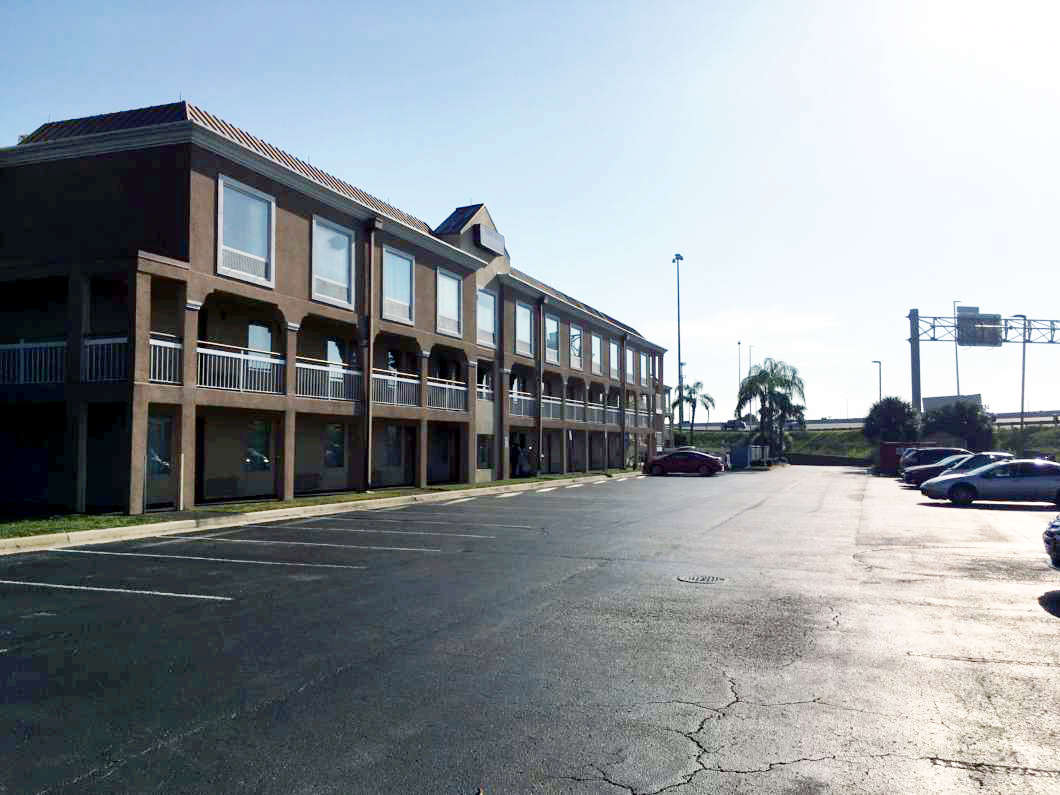 The Travelodge at this address has been talked about as a possible shelter for unaccompanied alien children. Photo by Amy Green

The Trump administration says it is considering putting a detention center in Central Florida for up to 500 migrant children. But one location being discussed doesn’t meet the administration’s requirements for such a facility.

ABE ABORAYA: The administration says it is looking in areas with established communities of caregivers who potentially can take in the children.

Now, the Trump administration is seeking a space suited for — as you said — housing 500 children in what it calls the Orlando Unaccompanied Alien Children Shelter. This would be a 24-7 facility with 500 staff. That’s about 167 staff on every eight-hour shift. The government needs enough space for children’s bedrooms, bathrooms, classrooms and indoor recreation areas. There also needs to be medical areas, dining and food service, and a place for administration officials.

And this is interesting: They also need about 2 acres of outdoor space for playgrounds and youth soccer fields.

TALIA BLAKE: Amy Green, a lot of attention is focused on an Orlando Travelodge. What can you tell us about it?

AMY GREEN: Well, the Travelodge is situated on Orlando’s south side, at the junction of the 528 and Florida Turnpike. The address is 1850 West Landstreet Road.

Now, I drove down to the Travelodge. In addition to being zoned wrong, the motel is located in a very urban area on a very compact piece of land right up against the 528. 17-92 also is right there, and so you’ve got basically cars whizzing all around you. There is almost no space for outdoor recreational activity or parking for the 167 staff who would be working at the facility at all times. The property was taken off the market at the end of August. Tax records show the property is in foreclosure.

Attention focused on the location after someone contacted Orange County’s zoning division and asked whether such a use would be allowed under zoning regulations. The answer was no. The property is zoned C-1 commercial, and changing that for a state-licensed group home would require a public hearing.

TALIA BLAKE: Amy, what do we know about these migrant children who could be housed in Central Florida?

AMY GREEN: Most of the children in these detention centers now are boys over the age of 14, primarily from Guatemala, El Salvador and Honduras, and that’s who would be housed in this facility in Orlando. Many were apprehended as they tried to cross the border. You’ll also remember the Trump administration continues to separate some families even after announcing an end to its so-called “zero tolerance” policy that forced nearly all adults entering the United States illegally to face criminal prosecution.

Most of the children remain in federal care for about 45 days, although some have lingered longer. Then they are released to parents, relatives or other caregivers while their immigration cases proceed.

The detention center would be part of the Trump administration’s plans to expand its network of detention centers for migrant children in response to fast-growing numbers in federal care. And that’s according to the administration’s own communications with local elected officials and shared with 90.7 News. Last year some 49,000 migrant children were in federal care at some point, up from fewer than eight-thousand less than a decade ago.

ABE ABORAYA: That’s right. With minor differences, The Trump administration is looking in the Arlington area of Virginia, across the Potomac River from the U.S. capital. And they’re looking around the San Bernardino area, about an hour outside of Los Angeles. And in Orlando, the area they’re considering is pretty big, from Deltona to Lakeland and from I-75 to Orlando. And we should say, the administration wants a lease of at least 15 years – these are not temporary shelters.

TALIA BLAKE: So what are the next steps here?

ABE ABORAYA: The next step is for the Trump administration to select where it will put the detention center. The plan is to have it ready for occupancy by the end of 2020 if the administration picks Orlando.