For One Immigrant Community, George Floyd’s Death Isn’t Just About Black And White 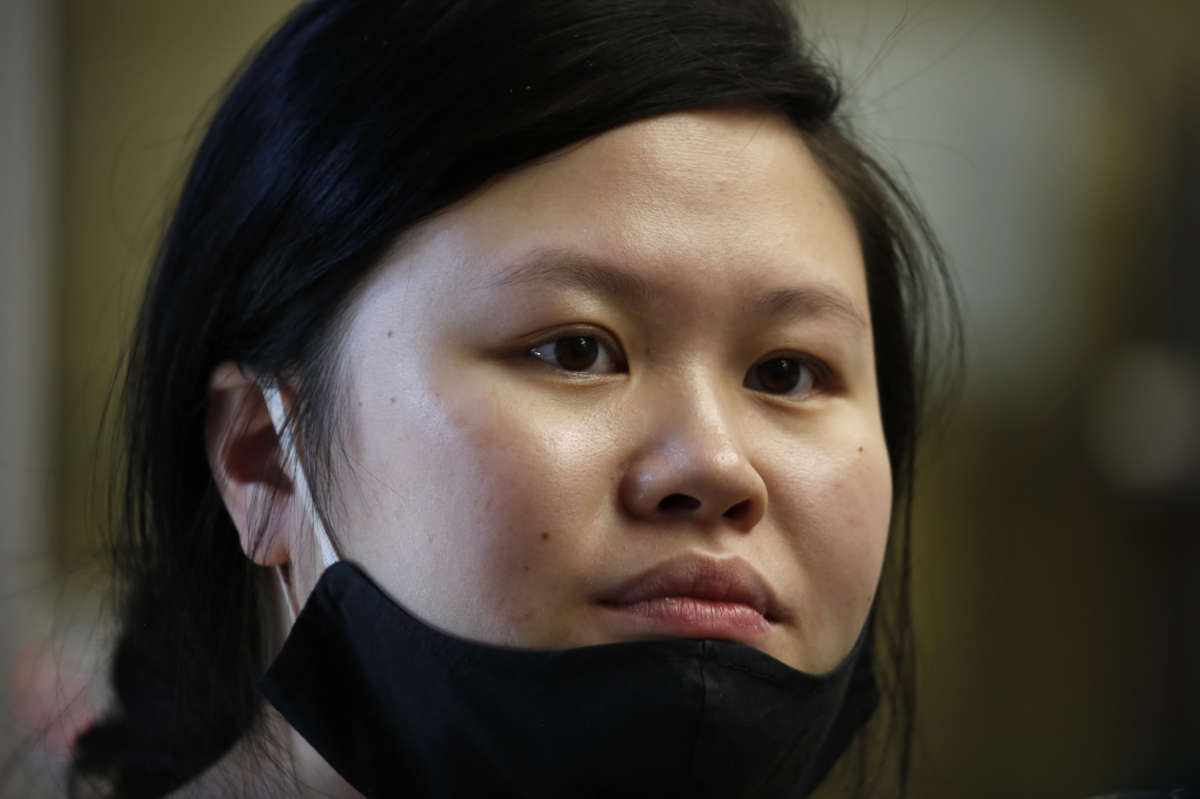 Gaosong Heu talks about reactions in the Hmong community to the killing of George Floyd. Former police officer Tou Thao, a Hmong American, is seen on video of the killing running interference with the crowd and standing watch. His involvement has stirred a racial debate among Asian Americans.

There’s something about the video of the George Floyd killing that makes it very specific to the Twin Cities.

The video shows a white police killings seen nationwide — but there’s a third identifiable person: an Asian American officer seen running interference with the crowd and standing watch. He’s now-former Minneapolis police officer Tou Thao, a Hmong American — which is how you know this isn’t “any” city. It’s Minneapolis.

The Frogtown neighborhood in St. Paul, Minn., is the heart of the area’s Hmong American population. The Twin Cities has the largest urban Hmong enclave in the world.
Jim Urquhart for NPR

And his presence not only has heightened slow-burning tensions between the Asian American and black neighborhoods in the Twin Cities area but has also divided his own tightknit immigrant community — which also happens to be the largest urban Hmong enclave in the world.

“If I think about it too much, I might start crying,” says Gaosong Heu. She and her husband, Marc, run Marc Heu Patisserie Paris in Frogtown, the St. Paul neighborhood that is the heart of the area’s Hmong population — and where she grew up.

“I didn’t know that he was Hmong until I saw his name,” she says. “Tou Thao is a very Hmong name.”

In America, there are only 18 clans of Hmong, an ethnic group from Laos, Vietnam and parts of China that sided with the United States during the Vietnam War. In the early 1960s, the CIA recruited Hmong to help keep the communist North Vietnamese out of neighboring Laos. In return, the U.S. promised to take care of them and their families. When Laos fell to the communists and U.S. troops pulled out in 1975, thousands of Hmong fled as refugees to neighboring Thailand and then resettled in the United States.

Many, like Gaosong Heu’s parents, came to the Twin Cities to start a new life. According to the 2010 census data, some 64,000 Hmong live in Minneapolis-St. Paul.

Thao, who was fired by the Minneapolis Police Department last month, is from that same community. Multiple news outlets report that Thao completed his police academy training in 2009 and had previously been sued by a black man for excessive force, according to the Star Tribune.

Derek Chauvin, the Minneapolis police officer who pressed his knee into George Floyd’s neck for more than eight minutes, has been arrested and charged with second-degree murder. The Minnesota attorney general’s office announced Wednesday that it was charging Thao with aiding and abetting and was taking him into custody.

“I am ashamed, embarrassed about Tou Thao’s complicit behavior in this murder,” Heu says. “But more than that, the reaction of my community and almost a defense of him in this case.”

The debate over Thao’s real or perceived complicity as another man of color is killed has arrived in a community that has always had underlying tensions with its black neighbors. This goes back to the 1970s, when the Hmong arrived as refugees and were “plopped into the most affordable parts of town,” says Bo Thao-Urabe, a Hmong refugee and head of the Coalition of Asian American Leaders in St. Paul. She has no known relation to former officer Thao.

“So we live in proximity to black and brown people,” she says. But even though Asian Americans were able to help grow neighborhoods like Frogtown into vibrant communities of color, there has always been tension. Hmong Americans rank lowest among Southeast Asian American ethnic groups “across multiple measures of income,” with 60% of them low income and more than 1 of 4 living in poverty, according to a recent study from the group Asian Americans Advancing Justice.

A mail carrier walks by a boarded-up business in the ethnically diverse Frogtown neighborhood of St. Paul, Minn., during continued demonstrations against the killing of George Floyd.
Jim Urquhart for NPR

Since Floyd’s death, Thao-Urabe says, people in the Hmong community have been afraid they’ll become targets — either online or in real life. Shops all along University Avenue, Frogtown’s main thoroughfare, are boarded up. This fear has coupled with the already lingering anxiety caused by the COVID-19 pandemic, which has produced an upsurge in violence against Asian Americans.

Thao-Urabe explains that those Hmong who defend ex-officer Thao argue that he shouldn’t be viewed like a “white cop” — that is, assumed to be racist and privileged. She says these people say they face racism that goes unseen, despite the model minority myth perpetuated about Asian American immigrants.

“I think that in America, when we lump Asian Americans together, there is an assumed universal success,” she says. “People have this preconceived notion that if you are Asian American, you must be educated. You must make a lot of money — and that is not the experience of this community.”

In other words, some believe that when it comes to Thao, reserve judgment.

Both Thao-Urabe and Heu say the divide is bringing up the issue of anti-blackness in the Hmong community.

“And that’s something we have to deal with,” says Thao-Urabe, noting that there have been reports of Hmong leaders and activists “viciously” attacked online for their support for the black community and the Black Lives Matter movement. Some in the Hmong community argue “you can’t be both pro-Hmong and pro-black,” she says.

For the Twin Cities’ Hmong community, the debate over anti-blackness is mostly being talked about behind closed doors. But much of the rest of Asian America seems to be experiencing a more public reckoning, with discussions erupting online over not just anti-blackness sentiment but also communities of color and solidarity.

While many Asian American activist groups, including Thao-Urabe’s, were quick to condemn Floyd’s death, come out in support of the Black Lives Matter movement and even take to the streets — including the mother of Fong Lee, a young Hmong man shot and killed by Minneapolis police in 2006 — many Asian Americans don’t agree.

“I think when Asian Americans are faced with the stark — no pun intended — the black-and-white moral starkness of the video, it’s very hard,” poet and activist Ed Bok Lee tells NPR.

Lee, who has lived in the Twin Cities area for decades, says the conversation happening right now among Asian Americans harks back to the discussions that took place during the Rodney King riots in the early 1990s. The unrest sparked tensions between the black and Asian American communities when Korean American businesses sustained half of the damage.

“If you are Asian American and you are anti-black, it’s probably because you see black people through a white hegemonic lens of racism, colonial-style racism,” he says. For Asian Americans to grapple with this moment, Lee says, it will involve opening up a lot of personal and historical trauma of racism and colonialism.

It’s “a moment of reflection” for Asian Americans, he says.