For Many Puerto Ricans, College Plans Washed Away With Hurricane Maria 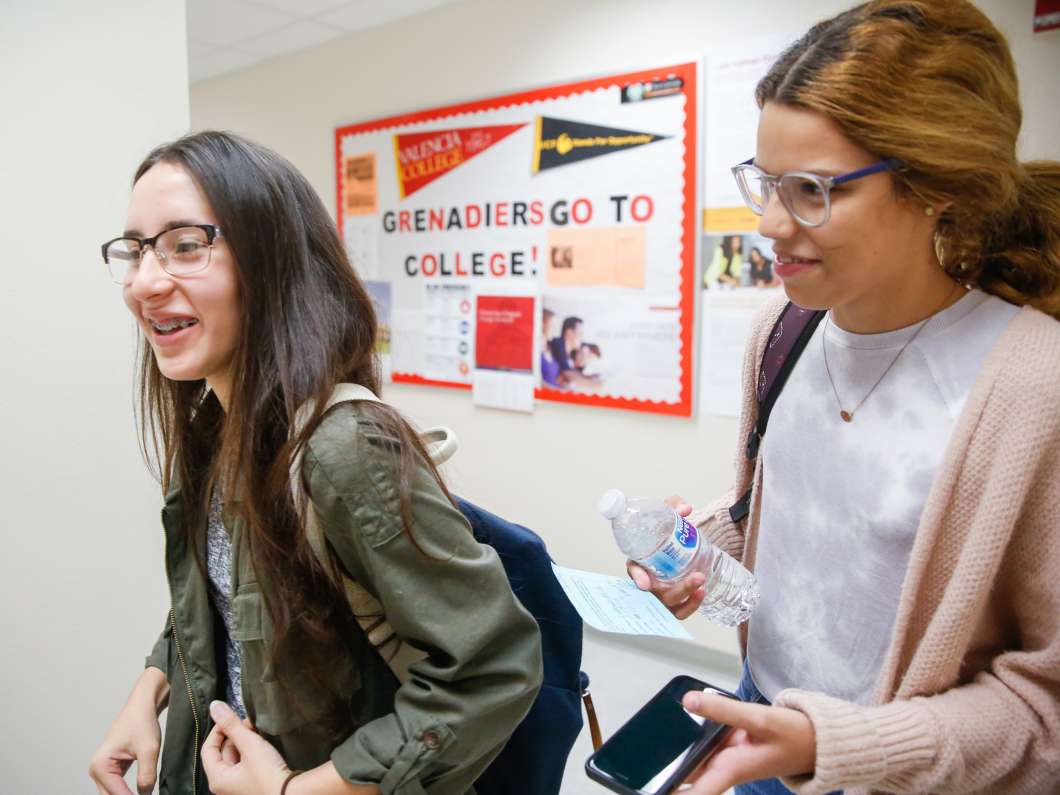 Yerianne Roldán and Zuleyka Avila are both seniors at Colonial High School in Orlando, scrambling to readjust their plans for college.
Image credit: Elissa Nadworny

Yerianne Roldán wants to be a graphic designer, or maybe a writer, or maybe both. Her good friend and classmate, Zuleyka Avila, has already made up her mind. She’s going to be a pediatrician.

Those plans hit a bump in the road this fall, though, when Hurricane Maria tore through Puerto Rico, where both girls lived with their families. Forced to leave the island — much of which is still without power — they’ve both relocated to Orlando.

They are among the more than 168,000 people from Puerto Rico who have arrived in Florida since Oct. 3. Schools have felt that influx, with about 7,200 displaced students enrolling from Puerto Rico and the Virgin Islands — Orlando’s largest district has taken in more than 2,000 of those students.

Yerianne arrived a month ago. She and her family — her younger sister, her mom and her stepdad — are staying at a hotel by the airport. Zuleyka went to school in San Juan — now she’s living in Orlando with her grandfather. Both girls are continuing senior year at Colonial High School, a public school where more than half of the 240 faculty and staff members have family ties to Puerto Rico, including the principal. The school has already enrolled nearly 100 students from Puerto Rico and the Virgin Islands.

Both girls still miss their old schools and their friends and families. Zulekya says she’s torn between embracing this new school and being sad about missing her senior year with all her friends from back home.

But this is their new reality.

At Colonial, there’s a lot of attention on going to college. Which is why, a few weeks after they’ve both settled into their classes, they are called, together, to the college specialist’s office.

Zuleyka is still struggling a bit with her English, so Yerianne helps translate. They’re completely overwhelmed, they say, and have no idea where to start.

It’s hard to start again, Zulekya says in Spanish. She already did this — back in Puerto Rico — sifting through the college choices, deciding which schools to apply to and studying and taking Puerto Rico’s college entrance exam. To do it again, in a new place, she says that it’s a lot of work. She is hoping to study biology and then go on to medical school. She’s heard good things about the local community college — should she apply there, even though her GPA is high? Will her English hold her back?

Yerianne has lots of questions too: When applications ask for her permanent address, should she list the hotel? Or, should she put her stepdad’s bother’s house in Orlando? She keeps getting emails from a private school she’s never heard of — is that worth applying to?

She thinks she wants to find a school with a good advertising program, but should she stay in Florida? She’s thinking probably, yes.

Florida is where some of her extended family lives. In fact, this exodus of the island has been happening long before Hurricane Maria hit. And many of those people have come to the Florida. In fact, the state’s Puerto Rican population has more than doubled over the past 14 years, according to an analysis by Pew Research Center. Orlando has been a popular place to land: In 2013, more than 300,000 Puerto Ricans lived in the Orlando metro area, the largest concentration of Puerto Ricans in the state.

The counselor shows the girls a list of state schools and helps them log into their online portals so they can search for programs and apply for scholarships.

As the girls file out of his office, they seem more optimistic. There are help sessions during lunch and after school. There’s a woman who can guide them through the federal financial aid form (FAFSA) next week. And they’re both signed up to take the SAT in a few days, a test neither has really had time to study for, but upon which, it feels to them, much of their future depends.

“I’m starting to make a plan,” says Zulekya. Yerianne nods her head in agreement, “I didn’t even know where my path started, and I needed support because I can’t do this alone. So, at least he helped me with a place to start.”

Amid all this, two schools in Orlando awarded both Yerriane and Zuleyka scholarships — so that’s lifted some weight off their shoulders. Yerrianne says it gave her a confidence boost too.

“The scholarship has definitely alleviated some financial stress,” she says. “It makes me feel better, smarter. It confirms that I’m capable of doing everything I set my mind to.”