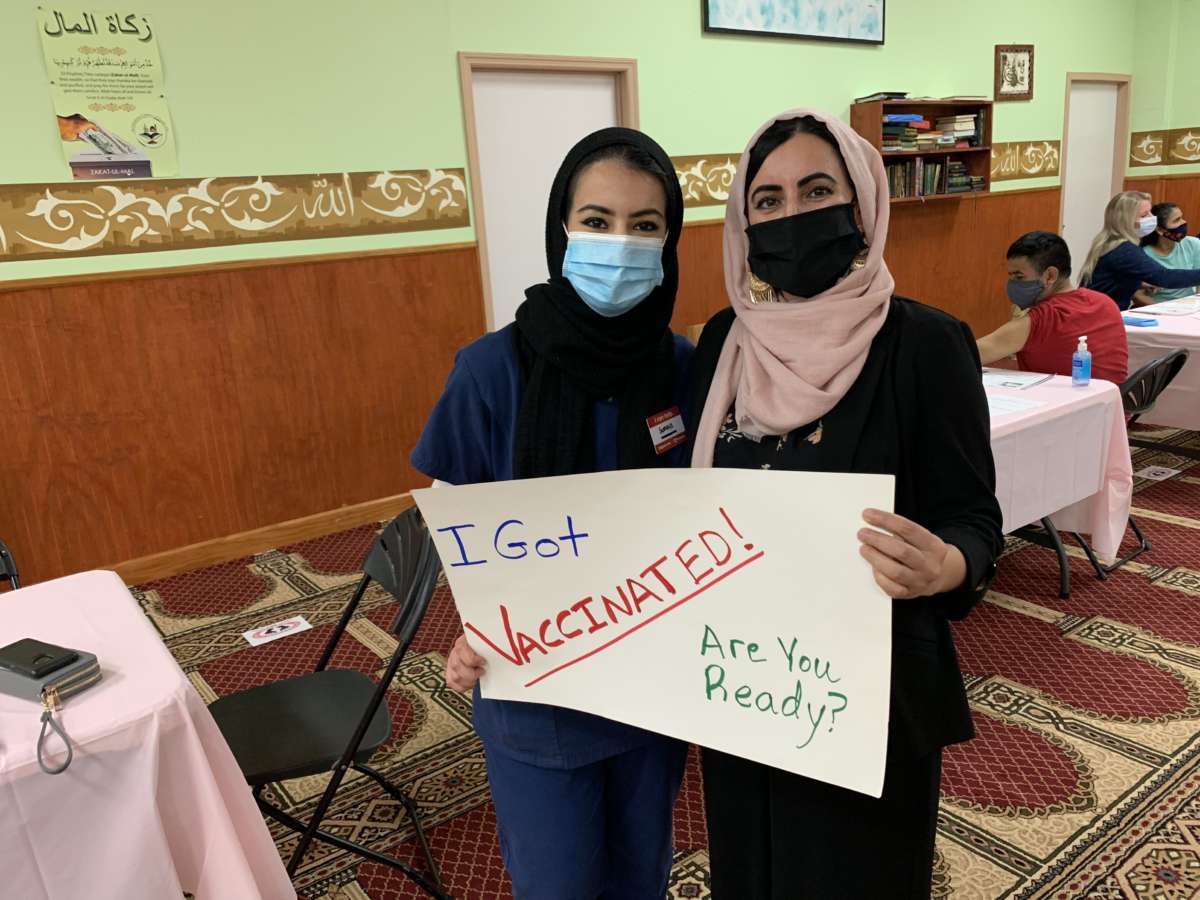 Sumaya Muhamed and her mother Suad Abdulla pose after Suad's second vaccine dose at the Salahadeen Center in Nashville. After weeks of affectionate cajoling and patient explanation, Muhamed convinced her mother to get the shot.

On a sloppy spring day in mid-March, hundreds of Kurdish Americans gathered in a field outside Nashville under a sea of black umbrellas. Some of the men carried a stretcher to an open grave, where a yellow backhoe waited.

In accordance with Muslim tradition, the body of Imad Doski — a prominent community leader — was buried within 24 hours of his death. He was another casualty of COVID-19.

“It hit people. They saw it happen to one of them,” says Faiza Rashid, a nurse practitioner at the Amed Family Clinic, the Kurdish-run medical practice in town. “It hit home.”

Doski’s death just six weeks ago became a wakeup call for many in Nashville’s Kurdish community — the largest in the U.S. The community has been growing and thriving since a wave of Kurdish refugees started arriving 30 years ago, fleeing Saddam Hussein and the Gulf War.

Doski was part of that early wave of immigrants, and he helped start the Salahadeen Center, which serves as a mosque, religious school and community center for Nashville-area Kurds.

Doski’s untimely death — he was in his mid-50s and relatively healthy — persuaded many Kurds to be more open to the idea of vaccination, according to Rashid, the nurse practitioner. After his death, the Salahadeen Center worked with the city health department to schedule on-site vaccination events.

Questions about vaccination during Ramadan

Immigrants were expected to have more hesitancy than most Americans.

But as Kurdish residents in Nashville have started to come around, new questions are emerging. A top concern is how the vaccine interacts with the religious obligations of the month of Ramadan, which runs through mid-May.

Many Muslims are careful not to break their daily sunrise-to-sunset fast, and some interpret that as refraining from anything that enters the body. The local imam weighed in, saying the vaccine does not count as nutrition. Other Muslim leaders around the world have also found ways to make an exception for the vaccine.

There’s also concern that if the post-vaccination side effects become fairly severe, such as a fever, Muslims might have to break their fast to hydrate. This is typically allowed when someone gets sick during Ramadan, but the whole day has to be made up later in the year.

Nurse practitioner Redor Abdullah says he’s been telling Muslims who hold more conservative interpretations not to risk waiting on the vaccine, even for a few more weeks.

“I would recommend you get it and make up your fast another day,” he says. “It’s better than getting the virus.”

Some refugees have had traumatic experiences with health care

Nashville’s public health department has had to lean on health care workers in the Kurdish community because it doesn’t have Kurdish workers of its own.

At the Salahadeen Center vaccination events, the people giving the shots are mostly white and English speaking. But there’s one standout exception: Sumaya Muhamed, a pre-med college student who is Kurdish American. She’s been trained to give COVID-19 shots because she also works part-time at a pharmacy.

“About 70% of the people who go to Salahadeen are just Kurdish speaking, so they would all be at my table, because nobody else knew how to help them,” she says.

Their need for cultural assistance goes beyond practical questions about safety. Muhamed explains that many of them are sorting through past trauma related to time spent in refugee camps, and the medical care they received there.

Most of the older Kurds in the Nashville area arrived in the U.S. as refugees, after years spent waiting in various refugee camps. While there, vaccinations were not a choice. And they weren’t always seen as safe. Muhamed says many developed infections.

“I don’t blame them,” Muhamed says of first-generation arrivals. “I would be asking the same thing if I went through that too.”

Speaking Kurdish and being patient can help

Her own mother, Suad Abdulla, has been among the hesitant, or at least those who have been slow to get a COVID-19 shot. These days, Abdulla works as an English language instructor in Nashville’s public schools, but as a child she lived in refugee camps in Turkey and she still has scars from vaccinations on both arms.

“As far as I know, the reason we have the scars is they were not switching syringes [between patients]. They were just putting it over the fire to sanitize it and use[d] the same needle to inject us with the vaccinations,” she says.

The refugees may also have received a common tuberculosis vaccine, which is known to sometimes cause a small ulcer or blister at the vaccine site and can lead to scarring.

At this point, it’s not a question for Abdulla of whether COVID-19 is a serious threat. She knows it is: Her uncle spent weeks in the hospital with his own severe case.

Still, she felt reluctant to get the vaccine and remains concerned that there could be long-term side-effects that aren’t yet known.

“We want to be fully knowledgeable with what we are putting in our body,” she says. “We want solid data to give us evidence that this will work and won’t cause adverse effects that are worse than the virus itself.”

And yet, her daughter Sumaya, with her pre-med knowledge and her pharmacy work experience, kept talking to her about it, explaining how the vaccines work and emphasizing how effective they’re proving to be.

It took a while to convince her — many weeks after teachers first became eligible to get their vaccine in Tennessee.

“But eventually she gave in, thankfully,” Muhamed says.

Half kidding, her mother said she would take the vaccine on one condition — that her daughter give it to her. So Muhamed saw her opening and, at a recent Salahadeen Center event, gave her mom the first dose before she could change her mind.