For Families With Special Needs, Vouchers Bring Choices, Not Guarantees 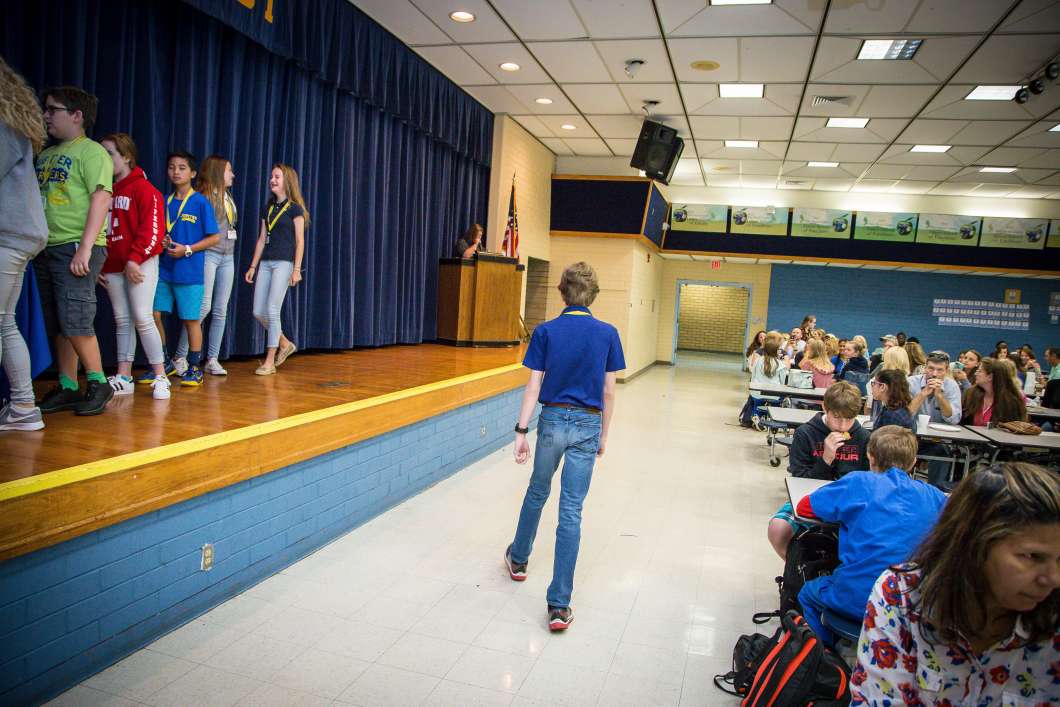 Reed is honored at Jupiter Middle School of Technology's Honor Roll Breakfast in Jupiter, Fla. Reed was among about 80 students who received a special honor for getting straight A's.

The day Ayden came home from school with bruises, his mother started looking for a new school.

Ayden’s a bright 9-year-old with a blond crew cut, glasses and an eager smile showing new teeth coming in. He also has autism, ADHD and a seizure disorder. (We’re not using his last name to protect his privacy.) He loves karate, chapter books and very soft blankets: “I love the fuzziness, I just cocoon myself into my own burrito.”

“He’s so smart but lacks so much socially,” says his mother, Lynn.

She says Ayden was suspended repeatedly from his school in St. Lucie County, Fla., starting in first grade, for outbursts like throwing a chair. And during “meltdowns,” he was physically restrained by being held in a bear hug from behind or penned in with gym-style mats for up to 45 minutes.

“Not just sometimes, it was every single day!” Ayden says. “That kind of stress gets me all worked up and it makes my tics go crazy!”

One day, Lynn says, Ayden came home with marks all over his body from being restrained: “That was my final straw.” She started looking for another school.

Helping kids like Ayden find a better fit is exactly why vouchers for special-needs students were created. There are 20 of these programs around the country, but the McKay Scholarship program in Florida is the largest, and one of the oldest. Given his diagnoses, Ayden is eligible for about $11,000 a year to attend a private school.

But there’s a catch. For the past eight months, Ayden’s mom has not been able to find a school within driving distance that will accept him. “They talk about McKay like it’s this great thing, but talk to these private schools and as soon as I say ‘behavioral issues,’ they’ll tell you that they can’t accommodate him,” Lynn says.

Repeated visits by President Trump and Education Secretary Betsy DeVos have suggested that Florida is intended to be a national model for the expansion of school choice. “I would point to Florida as being one that has had a variety of options for the longest period of time,” DeVos said recently in a radio interview. She also mentioned the McKay program approvingly during her confirmation hearing.

In cases like Ayden’s, leaving can also be a more attractive alternative to pursuing costly legal action against school districts. Examinations of court records show families usually lose these cases.

Jay Phillip Greene at the University of Arkansas, a pro-voucher researcher, argues, “By giving special needs students additional options, traditional public schools can no longer take those students and the additional revenue they generate for granted.” A study he published in 2011 showed that special-needs students did modestly better at public schools that faced more McKay competition. The same study also showed that with the introduction of the McKay program, public schools were less likely to identify students as having mild special needs in the first place.

But, when it comes to vouchers for special ed, the problem, say legal experts, is twofold: not enough rights and not enough money. Lynn and six other Florida families interviewed for this story have transferred again and again, between public, private, home school, virtual and charter schools, following a road of hope and disappointment.

“When we hear that Florida is a role model, we cringe a little bit because we see so many problems with the system,” says Stephanie Langer, a Florida attorney who specializes in special education rights.

The federal Individuals with Disabilities Education Act, or IDEA, guarantees children with disabilities a “Free Appropriate Public Education,” known as FAPE. And a major Supreme Court decision this spring, Endrew F. v. Douglas, affirmed that what is “appropriate” for these students must be “ambitious” and not “barely more than de minimus.” The boy in that case, like Ayden, was capable of progressing meaningfully academically given the right supports, something that’s true of many children with autism spectrum disorder.

But outside of public and charter schools, there is no right to FAPE. This includes things like due process, the right to an evaluation, regular meetings between parents and school officials, and, crucially, having an individualized education plan, or IEP, written and followed.

And the F in FAPE includes free therapies and other services, sometimes funded by Medicaid, that private schools may charge extra for.

“A lot of parents don’t necessarily understand that they’re giving up their IDEA rights” when they leave public schools, says Shawn Ullman, director of the center for special education advocacy at The Arc, a national advocacy organization for people with intellectual and developmental disabilities. “If the IEP isn’t being followed, there’s no recourse.”

In fact, says Ullman, religiously based schools, which make up a majority of private schools in Florida and around the country, don’t even have to follow the Americans with Disabilities Act, the federal law that guarantees basic accommodations like wheelchair access.

Kimberley Spire-Oh, who is Lynn and Ayden’s attorney, has a special-needs son of her own. She says that since private schools are not subjected to the same legal oversight as public schools, “A lot of taxpayer money is being wasted.”

There is no public data collection on how well private schools in Florida are serving McKay students with special needs. These schools can refuse entry to any child they wish. Or, accept them, take their tuition and later ask them to leave.

Lynn says that most of the private schools she reached out to rejected them without even meeting Ayden. “I appreciate the fact that they’re upfront with me,” she says, “but it’s very frustrating on my part.”

Ayden has been diagnosed with post-traumatic stress from the injuries he sustained at school. He spent most of this past school year on what’s called “homebound.” This means a few hours a week of one-on-one teaching from a public school teacher. The rest of the time, Ayden must go to work with his mother or spend time with his father. “They’re just keeping me at home for now, but I’m going to go back to school eventually,” Ayden says with hope in his voice.

Part of the reason that schools might not accept students like Ayden is the expense. “In general … special education costs approximately two times as much as regular education,” says Perry Zirkel, a national expert on special education law at Lehigh University in Pennsylvania. “That’s what’s ‘special’ about special education.”

The McKay scholarship can exceed $22,000 for students with profound and severe disabilities, such as those who need help feeding themselves.

But the average amount is $8,000. That’s just $1,000 more than the average per-pupil spending for all public school students in Florida, which spends less than most other states.

That also means that the state of Florida may save money when special education students “go out on McKay.”

Private schools that cater to students with significant special needs, like Woodland Hall Academy in Tallahassee, can charge $20,000 and up. McKay scholarship families must supplement out of pocket or hope for financial aid. Schools that are more affordable may lack the services these students need. In addition, the state doesn’t pay for transportation, which limits choice.

Clearly, for 31,000 McKay students, private schools are working, at least for a time; the average usage is 3.6 school years.

NPR Ed asked the Florida Department of Education about how the vouchers serve families with special needs. Audrey Walden, the press secretary for the department, sent a statement that read in part, “school choice is an essential component of our state’s K-12 public school system … When our state’s students succeed, all Floridians benefit.” She confirmed that private schools are expected to self-report information about what disabilities they can accommodate and whether they accept McKay.

An hour south of St. Lucie County, where Ayden lives, we met Reed, a slender 13-year-old with a polo shirt neatly tucked into jeans. He was diagnosed with autism in preschool. “He was the kind of classic kid, pushing the firetruck around and around, not engaging with other children,” says his mother, Lauren. At the time, he was attending Good Shepherd Episcopal School in Tequesta, Fla.

Lauren says at first, Good Shepherd’s staff was unsure about their ability to accommodate Reed, but eventually the school embraced him.

“Reed ended up being one of their star students, I think. One of the favorite students of the school,” says his mother. Good Shepherd’s head of school, John Hoye, confirms that the family had a good experience “because there are so many caring hearts in the building.”

The family brought in Reed’s therapist at their own expense to help the teachers learn how to work with him. He thrived there, showing a talent for music. “I call those the good old days,” says Reed.

But, the small school, with about a dozen children per grade, only goes up to fifth grade. And like Lynn, Lauren and her husband, Rolf, had trouble finding another place for Reed.

Money was no object. Lauren estimates that they have spent at least $100,000 a year out-of-pocket on speech and occupational therapy and on applied behavior analysis, an intensive form of coaching for autism.

One school where they applied was the Pine School, north of West Palm Beach. “We don’t have children with anything too involved because we just don’t have the resources,” says the admissions director, Beth Lettengarver, explaining that the school no longer accepts the McKay Scholarship.

For sixth grade, Reed enrolled at a charter school, Franklin Academy. A formal state complaint from the family says Reed’s IEP was not followed there, in part because there was no psychologist on staff, and that Reed was severely bullied. The school’s reply says Reed retaliated by stabbing his bully with a pencil and was suspended. The family withdrew Reed after three weeks.

Scott E. Sznitken, the executive director of the Florida Charter Foundation, which operates the six Franklin Academies, would not discuss Reed, citing privacy. He confirmed that the schools do not have a psychologist on staff.

So, after searching high and low, Reed’s family ended up at the one school that had to take him in.

Reed is now in his second year, seventh grade, at Jupiter Middle School of Technology.

“We’re a regular old comprehensive public school,” says the principal, Lisa Hastey. “We’re ethnically diverse, ability-level diverse.” More than 10 percent of students are in special ed, and one of the teachers is an autism specialist. She offers dog therapy, yoga therapy, art therapy, and hosts a “lunch bunch” so the school’s 20 or so students with autism have a safe social space.

Reed is making A’s and B’s in mainstream classes. His therapist comes to class with him for a few hours a day. He is one of several students at the school to make all-state chorus, and he also plays keyboard.

“I prefer singing,” he says with a shy smile. “It’s my portable instrument.”

And Reed is making friends.

Caleb Petranchuk, a typically developing eighth-grader, sings in boys’ chorus with Reed. “He’s a great guy! Once you get to know him,” Caleb says. “He’s always cracking jokes and making everyone laugh.”