For Actor-Activist Sacha Baron Cohen, Being Called A ‘Bouffon’ Is A Good Thing 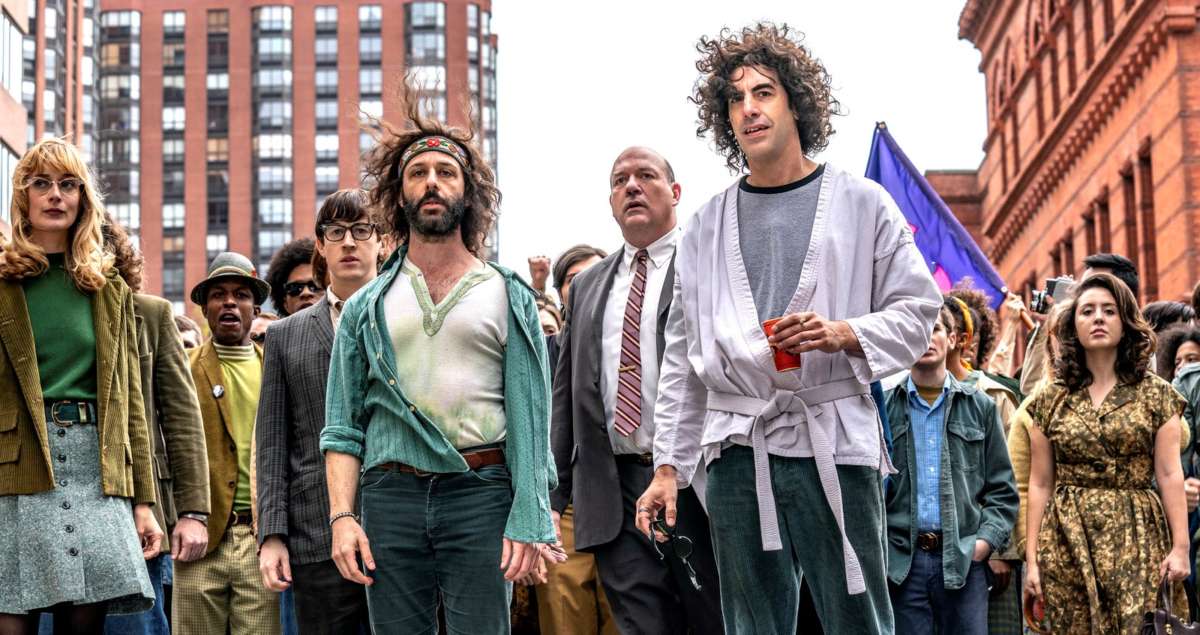 British actor and satirist Sacha Baron Cohen is having a very nice year, as his fictional character Borat might put it.

He recently took home the Golden Globe for Best Actor in a Musical/Comedy and he’s nominated for two Oscars: Best Adapted Screenplay for Borat Subsequent Movie Film and Best Supporting Actor for The Trial of the Chicago 7 . While these two movies might not seem to have anything in common, Cohen’s over-the-top characters and outrageous pranks are intended to challenge people’s beliefs and take on the powerful, not unlike Abbie Hoffman, the counterculture revolutionary he portrays in The Trial of the Chicago 7.

Like him or not, Sacha Baron Cohen is both a sophisticated clown and social activist. The clown part started early watching legendary British satirists Peter Sellers and Monty Python. “The reason I became a comedian was really from seeing Life of Brian when I was about 8 years old,” says Cohen of the Monty Python movie.

Cohen’s social activism was ignited when he studied the American Civil Rights movement at Cambridge University. His dissertation was called ‘The Black-Jewish Alliance: The Case of Mistaking Identities.’ That’s when Abbie Hoffman became one of Cohen’s heroes.

“I was just really in awe of Abbie,” he says, “somebody who was really an authentic protester who was ready to die to fight against injustice.”

Hoffman also knew how to entertain. In 1968 he was one of the men accused of conspiring to incite the riots that broke out at the Democratic National Convention in Chicago. Hoffman’s courtroom antics were legendary: He did a headstand on the defense table and, along with his friend and fellow defendant Jerry Rubin, showed up dressed in judicial robes. He was both charming and outspoken in press conferences.

“He really understood the power of humor and wit and comedy to reveal the ills of society,” Cohen says.

To prepare for the part of Abbie Hoffman, Cohen listened to Hoffman’s speeches and press conferences and read transcripts of the trial. As a writer himself, Cohen was in awe. He even suggested lines to Aaron Sorkin, who wrote and directed The Trial of the Chicago 7. “And Aaron very kindly would say, ‘Thank you very much, but we’re going to stick with the script,'” Cohen jokes.

There was no possibility of sticking with the script when Sacha Baron Cohen was making his other Oscar nominated movie, Borat Subsequent Moviefilm. A cross between the satirical correspondents on The Daily Show and the slapstick of The Three Stooges, Cohen impersonates a naive, backward journalist from a mythical version of Kazakhstan. Cohen describes Borat as a “racist,” “misogynist,” “anti-Semite.” When real people spend time with him, thinking they’re being interviewed for a foreign documentary or some other pretext, their true beliefs often emerge. “They have a camera in front of them and they can reveal themselves to either be horrific or good or a mixture,” Cohen says.

Without ever breaking character, Cohen spent almost a full week living with Holleman and Russell and, he says, grew fond of them.

“Sure, they’re conspiracy theorists and many liberals see them as the enemy, but I liked them,” he says. “A lot of people who’ve seen the movie really liked them, too. And what you realize is that these are good, ordinary people who’ve been fed a diet of lies and conspiracies by politicians and social media.”

For Jonathan Greenblatt, CEO of the Anti-Defamation League, Sacha Baron Cohen is a “voraciously curious” satirist “who uses his art to expose the hypocrisy of people in positions of authority, of popular culture… and he really forces you to confront your own prejudices.”

In 2019, the ADL gave Cohen its International Leadership Award. In a speech that now has more than 2 million views, Cohen berated the tech giants that control social media calling them, “the greatest propaganda machine in history.”

“Sacha Baron Cohen is also an activist who is willing to put himself out there and to use his craft to drive a conversation and to generate change,” Greenblatt says.

Cohen and a small team of writers are nominated for the Oscar for Best Adapted Screenplay for Borat Subsequent Moviefilm. Even though the movie demands constant improvising, Cohen says they wrote a 90-page script before they started shooting. In addition to writing lines for both Borat and Borat’s daughter Tutar, he says, “we wrote the lines that we hoped the real people would say and we had a read-through.”

They brought in major Hollywood screenwriters who Cohen says thought the script was “great.” Then they asked him, “‘Who are you going to get to play Mike Pence or Rudy Giuliani?'” When Cohen explained they would be playing themselves, “people just said, ‘Alright, you’re completely mad and you’ve wasted the last two hours of our life. Thank you very much,'” he says.

In a scene from the movie that made headlines, Borat’s daughter Tutar, played by Maria Bakalova, poses as an interviewer questioning Giuliani in a hotel.

“For sure I was freaking out before that famous scene in the hotel in New York with Rudy Giuliani,” remembers Bakalova, who is nominated for an Oscar for Best Supporting Actress. “Because he is an established enough public figure and he is a politician and I’m not even American.”

Bakalova says that throughout the filming, Sacha Baron Cohen was constantly making changes: “There was a script that was ever-evolving every single day. They were writing new scenes and new jokes because Sasha is also a perfectionist so… there is always going to be probably a better joke.”

Cohen is serious about the craft and power of comedy, holding fast to something he learned in his early 20s. “I learned under this legendary clown teacher, which sounds like a joke in itself, but there is a legendary clown teacher, Philippe Gaulier, and he taught this really obscure form of satire called bouffon,” Cohen says. “Bouffons were kind of the dispossessed in society in the medieval ages. They’d live outside of the towns and then, once a year, they were allowed in the villages, in the towns, and they would put on these bouffon plays and the idea was to undermine the establishment.”

Cohen says Gaulier once told him, “You are a bouffon.”

“I was quite shocked,” says Cohen, “But I suppose, yes, I never sought the approval of people I don’t respect.”

How else could Sacha Baron Cohen spend years pulling off wildly ambitious pranks that raise awareness, sometimes get him sued, and win him Oscar nominations?