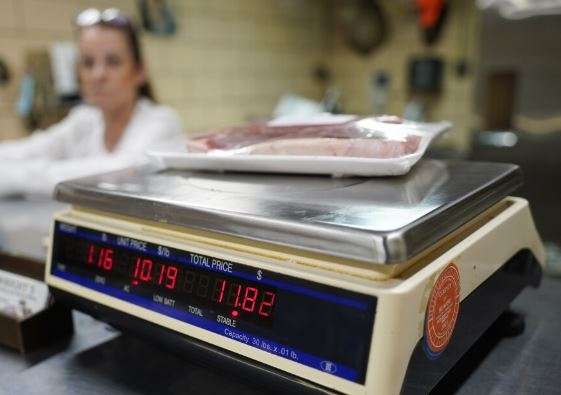 In this photo taken on Thursday, June 16, 2022, Dawna Stenzel weighs beef in the retail section of Wright's Meat Packing facility in Fombell, Pa. A survey says Floridians' biggest concern is inflation and the economy. (Keith Srakocic/AP)

The study probed Floridians about their thoughts on inflation, abortion, gun reform and the midterm elections.

The study asked 600 Floridians to share their thoughts on abortion, gun reform and the midterm elections. But while participants were split on a number of these issues, their primary concern remains the economy and inflation.

Stephen Kneely, USF professor and survey co-author, said 74% of participants said their vote in November’s midterm elections would be influenced by these “pocketbook issues.”

“Everything sort of gets trumped by the economy,” he said. “Inflation is a really driving factor right now. That was identified as one of the biggest factors in how folks will vote this fall. The candidate that they have the most trust in to handle that is likely to supersede their opinions on some of these social issues.”

Only 26% said their votes would be more influenced by those social policy issues.

The survey also showed a slight dip in Gov. Ron DeSantis’ popularity, but Kneely said this decrease is within the study’s margin of error.

Meanwhile, President Joe Biden’s approval rating is still falling with Floridians. About 62% of participants said they disapprove of Biden’s handle on the economy.

The survey found that 57% of Floridians disapprove of the Supreme Court’s ruling on abortion — what Kneely called a slight majority.

“And so while we have majority disagreement on the Supreme Court ruling itself, we don’t have a lot of agreement at all on what Florida should do next as a state level policy,” he said. “When we dig into the data there’s a lot more nuance there.”

About one-third of Floridians polled want the state to pass a law protecting abortion access, while 44% of participants called for some form of state-level restrictions, such as a full or partial ban.

Only 13% prefer that the state do nothing.

But Kneely said they found that most Floridians are on the same page about recent gun reform laws passed by Congress.

“I expected to see bipartisan support for those things, because the truth is, again, that the opinions of most people are not well represented by the party extremes. And the majority have long supported sensible gun reforms,” he said. “However, the bipartisan support was stronger than I anticipated. There is an appetite among voters for compromise and reform on gun control.”

600 adult Floridians were surveyed using an online web-panel. The survey was fielded from July 2-10, and the results are reported with a 95% confidence level and a margin of error of +/- 4.

Quotas were balanced by region of the state, gender, age, race, ethnicity, education and political affiliation.

Next week, Kneely and other researchers will be releasing more survey results that address national news, such as Elon Musk’s attempt to buy Twitter and gasoline prices.