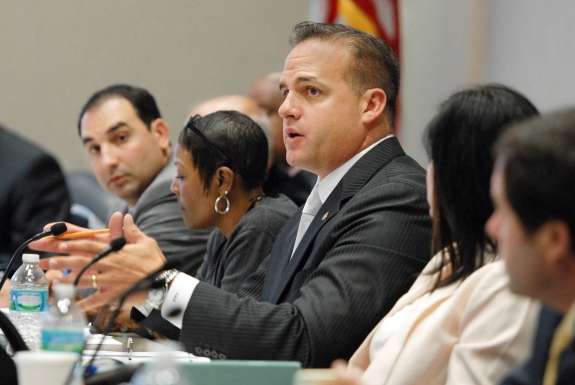 Miami Rep. Frank Artiles is sponsoring a bill that would provide jail time and fines for using the wrong bathroom.

Florida could become the first state to criminalize using the wrong bathroom. The Single Sex Bathroom Bill has cleared its second committee in the Florida House.

ABORAYA: Exactly. Public testimony in yesterday’s committee hearing was very emotional. Many of those who spoke were transgender and talked about their own experiences being harassed in bathrooms. “ID to pee” has become kind of a rallying cry, and some made were references to Nazi Germany and show me your papers.

“I find it insulting that you would actually use the holocaust and the death of six million Jews as well as slavery of 12.5 million African slaves coming into this country in your dialogue,” Artiles said. “It’s insulting. Insulting. Please don’t ever use that again in committee.”

CRESTON: It sounds like things got pretty heated. Why has Artiles filed this bill?

ABORAYA: A Miami ordinance gives transgender people the right to use public bathrooms that fit the gender they identify with. Artiles says this can be used as a pretext to commit a crime, the idea that a man would put on a wig and a dress, say they’re transgender and gain entry into a woman’s restroom. He sees this as a possible loophole that can be exploited.

As members of the committee pointed out, though, the activities he’s talking about are already illegal.

CRESTON: Now the initial vote was along party lines, but there has been some Republican opposition to the bill as well.

ABORAYA: Republican Rep. Ken Roberson voted against the bill. He said it was unenforceable, and he called the public safety argument weak.

“I think it’s interesting that The Florida Sheriff’s Association and the Florida Police Chiefs haven’t testified today before this committee,” Robeson said. “Usually when it comes to public safety they’re the first ones here.”

CRESTON: Now some people may think this bill only applies to bathrooms but this would reach down into public schools as well, wouldn’t it?

ABORAYA: It would, and in fact I spoke with an Orlando family who has a transgender 5-year old. I spoke with the mother worried about what will happen in high school when her transgender daughter will have to use the faculty bathroom.

CRESTON: Is Florida alone on this?

ABORAYA: No, Arizona, Utah, Minnesota, Texas and Kentucky are all looking at similar laws.

CRESTON: So what’s next?

ABORAYA: It has one more committee vote before heading to the house floor. The Senate hasn’t even touched it.