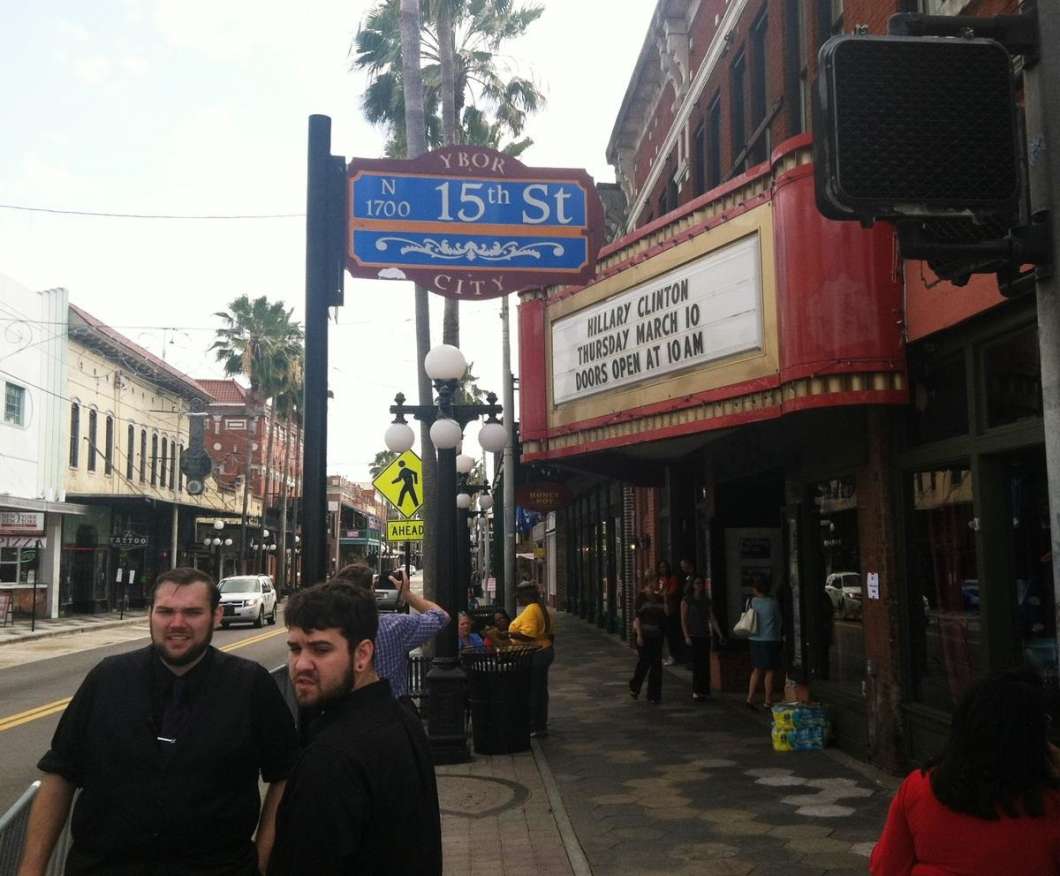 Clinton swings through Ybor City. Both Clinton and Trump have stopped in Hillsborough County. /Photo: WUSF

In February ten thousand supporters packed the USF Sun Dome to get a glimpse of Trump, while several thousand others were turned away at the gate.

At her rally, Clinton touted her support speaking before a couple thousand people at Tampa’s Ybor City. “So right here in Tampa, in front of the mayor, I want to tell you if I’m your president,” said Clinton, “we’re going to make investments in this port, we’re going to go back and look at high-speed rail.”

And why were they here? USF political scientist Susan MacManus said Hillsborough is filled with conservative Midwesterners, progressive urbanites, new immigrants from the Caribbean and South America, and third-and-fourth generation Cuban-Americans.

“Hillsborough County itself is often considered the best bellwether of Florida,” said MacManus, “the old saying has been, particularly in presidential elections, that as Hillsborough goes, so goes Florida, as Florida goes, so goes the nation.”

Hillsborough is about eighteen percent black and twenty-seven percent Hispanic, including a growing community of Puerto Ricans. Then, there’s what MacManus calls the three key areas targeted by political operatives.

“From an age perspective, a geographical perspective, and a racial and ethnic perspective, Hillsborough looks more like the state than any other single county,” she said. “And it’s very divided, and very competitive.

If you want to come to the urban heart of Tampa, you have to come to Ybor City. This is the historic Latin quarter that was founded by cigar workers fleeing from Cuba around 150 years ago.

Inside a handsome brick building with a balcony overhead, Hillary Clinton supporters held a roundtable with Hispanic entrepreneurs.
One of the participants was attorney Karen Skyers. She’s bilingual, and when she studied at Florida A and M University, she was part of the Black and Hispanic Law Student Associations.

“And I think that she is definitely putting a plan into place, she’s describing herself as the small business president,” said Skyers.

“Donald Trump sees them as extortion targets, building his empire for pennies on the dollar,” said Skyers.

Fifteen miles east on I-4 is a whole different world. There, outside the Parkesdale Market grove stand on U.S. 92 , Thad Diaz of Tampa says he doesn’t like either of the main candidates, who seem to focus more on personality quirks than the issues.

“One’s a megalomaniac comic supervillain,” said Diza, “and the other one’s a narcissistic (bleep) that’s going to run the country into the ground, in my opinion.”

Instead, he’s looking at casting his ballot for Gary Johnson, the Libertarian candidate.

Even though Hillary Clinton’s lead is increasing in national polls, MacManus said these differences shine a spotlight on the uncertainty of the I-4 corridor.

“And let me tell you, this election is far from done,” said MacManus.

That, she said, is why the I-4 corridor reflects the entire country.