Florida’s I-4 Corridor: A Stop In Volusia County 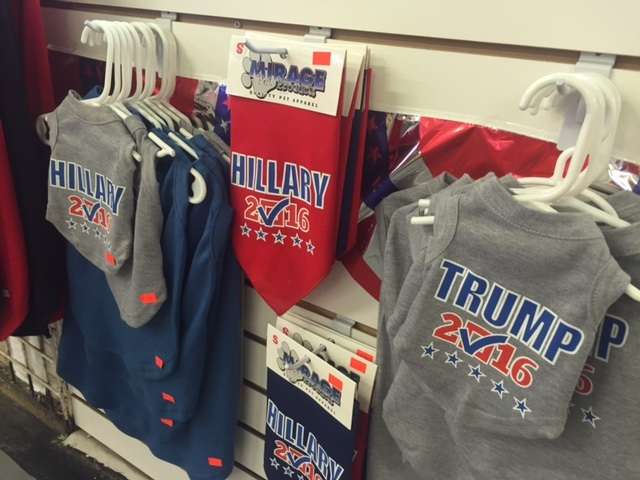 The I-4 Corridor stretches from Daytona Beach to Tampa, and has become a key battleground in the race for the White House. As unpredictable as it is essential, we teamed up with our sister station WUSF in Tampa to take a trip down the corridor to learn more about these coveted voters. We start in Volusia County.

While pollsters dial up Florida voters in this tight presidential race, there’s a different kind of polling taking place at the Daytona Flea Market. It’s happening at the cash register.

There are buttons, hats and bobble head dolls of both candidates for sale, but one candidate is selling better than the other.

Take The Doggie Shirts
Gray shirts in a variety of sizes from Chihuahua to beagle hang in two rows. One row holds Trump shirts, the other Hillary shirts. The Trump shirts fly off the hangers while the Hillary shirts can’t be given away.

And sales are brisk around the corner where Steve Stone is selling Trump for President t-shirts but for humans. “Very good. T-shirts are good, and some people just have to have that ‘Hillary for Prison,’” said Stone.

The shop looks like a campaign office and in many ways Stone is managing Trump’s ground game here in Volusia County.

So he opened his shop in the flea market. He says he wants to branch out to Orange City and Deltona.

“It just needs to spread. This is grassroots,” he said.

So Stone’s taken it upon himself to register voters and hand out signs.

Resident Karen Gorman sees those signs all along the beachside.

She calls herself a conservative and said she supported Bill Clinton back in the 90’s, but can’t bring herself to switch sides again and vote for Hillary.

“There’s so many things in her past, so many things swept under the table, it bothers me,” said Gorman. “Even though she’s a woman and she could be the first woman president, I really think this is going to be a Trump state, a Republican state.”

Not All Of Volusia County Is Trump Country
While Mitt Romney won the county by a hair in 2012, Barack Obama handedly took the county in 2008. University of South Florida political science professor Susan MacManus remembers when it used to be one of the most solidly democratic counties in the state.

“And the newspaper over there, the Daytona Beach News Journal, used to be the most liberal newspaper in Florida when it was owned by a family,” said MacManus. “It is no longer that.”

Republicans now outnumber Democrats, but just barely. Not far behind are unaffiliated voters.
Daytona is home to many of Volusia County’s Democrats, partly due to the sizeable black community surrounding the historically black Bethune Cookman University.

Debating Politics At The Barber Shop
Not far from campus customers get a cut and talk politics at Cut Masters barbershop.

“The barber shop, that’s where it is, where people really speak their mind. And at the end of the day we all remain friends.”

“I don’t always vote down party lines, there are some republicans that I vote for as well,” said Harris. “But when it comes down to hearing the issues, knowledge of the issues and just the arrogance of the other candidate, there’s no way I can support someone like that.”

Harris is also a pastor so whether he has people’s attention in the barber’s chair or in the pulpit he’s constantly preaching about the importance of voting.

“Oh definitely,” said Harris. “As a matter of fact you can probably see my sign ‘let my people vote’ I have it right on the front.”

Getting out the vote will be key deciding who wins Volusia County.

Also key, how all of those unaffiliated voters will swing on the eastern edge of the I-4 Corridor.