Florida’s Hispanics Could Decide The Election 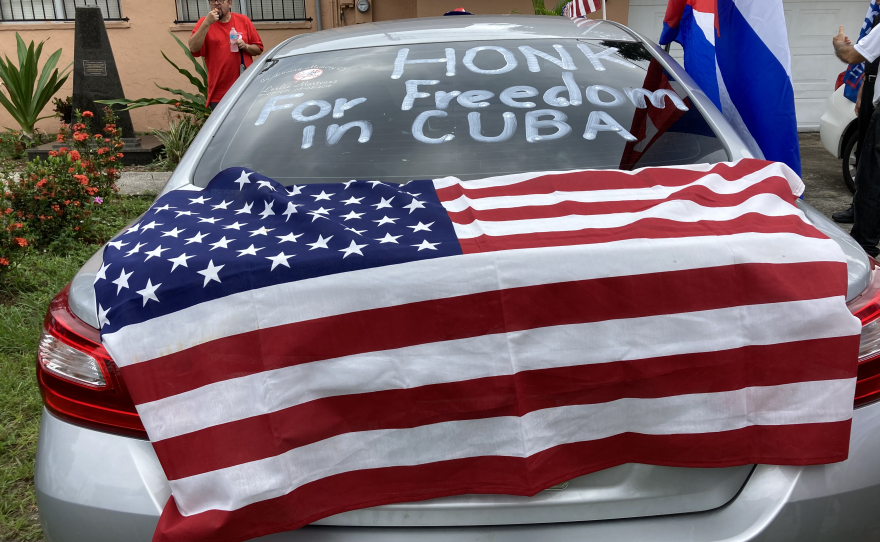 Gearing up for the Caravan for Liberty and Democracy in West Tampa. Steve Newborn/WUSF Tampa

Hundreds of thousands of Puerto Ricans moved to Florida after Hurricane Maria devastated the island. Hispanics are the fastest-growing bloc of voters in the state, and whichever party woos them to vote for their candidate could decide the presidential election.

This is the soundtrack to one of 18 “get-out-the-vote” videos produced by a non-partisan coalition called Respeta Mi Gente (Respect My People).

The coalition is made up of more than 20 civic groups in Central Florida dedicated to getting out the Puerto Rican vote.

The video is hosted by Daniela Droz, a TV and radio personality who moved to the Orlando area after the island was battered by Hurricane Maria.

“In every presidential election since 1992, the winner of Florida has gone on to the White House. And the Puerto Ricans make up the largest Hispanic group in the state of Florida,” Droz said, introducing the campaign. “And that’s what we’re seeing in this upcoming election. And that’s why we are here today.”

For decades, courting Florida’s Hispanic vote mainly meant trying to sway Cubans who fled Fidel Castro’s regime in the 1960’s. They formed a mostly reliable Republican voting bloc – as did subsequent waves of people fleeing Socialism in places like Venezuela and Nicaragua.

But Hurricane Maria blew hundreds of thousands of American citizens from Puerto Rico into tourism-related jobs in Orange and Osceola counties — jobs that have since evaporated because of the coronavirus pandemic.

“Cubans skew Republican, the Puerto Ricans skew Democratic. So you can’t assume an appeal to Hispanic voters in Florida will be received in the same way by those two constituencies,” said Ciara Torres-Spelliscy, a professor at Stetson College of Law in St. Petersburg. She’s descended from Afro-Cubans who left the island in 1900.

Torres-Spelliscy says it’s impossible to lump together “Hispanics” under any kind of umbrella.

What that means, she says, is while older folks might be more inclined to vote with memories of what leftists like Fidel Castro did in Cuba or Nicholas Maduro did in Venezuela, their sons and daughters might have more progressive views.

The importance of the Hispanic vote has been underlined by visits by Joe Biden to Miami and dozens of meet-ups and Zoom events geared toward different groups by Democrats. They even drafted Alexander Hamilton.

“Hi, it’s Lin-Manuel Miranda sending you love this Hispanic Heritage Month,” the actor and composer said in the kickoff for Respeta Mi Gente. “When Hurricane Maria devastated Puerto Rico, what did the President of the United States do to help these American citizens? These human beings – when we needed him most? Nothing. He threw paper towels at us in San Juan.”

On one recent Saturday, both the Biden and Trump campaigns held dueling events aimed at Tampa’s Latino community.

On the Republican side, the Caravana por La Libertad y La Democracia started at the Casa de Cuba in heavily Hispanic West Tampa, and ended in Ybor City, the historic heart of the cigar industry begun by Cuban immigrants in the late 19th Century. Guava pastries and Cuban sandwiches were passed around as the caravan gathered on the anniversary of the start of the Cuban Revolution to fly their Trump and Cuba flags.

Eduardo Darna Lou fled Cuba seven years ago. He supports Trump, saying change will come only by putting pressure on the Cuban regime.

“Because we’re seeing exactly the same thing that we saw in Cuba happening here in the U.S. With the media, the universities, the students rioting in the streets. We saw that in Cuba,” said Lanz, who was born in Ybor City to parents who fled Cuba. “They did away with our guns. They did away with the police. We’re talking about the same playbook.”

Most polls show Biden leading Trump among Hispanics by more than 10 percentage points. And that could be because of the thousands of Puerto Ricans moving to the state since the last election.