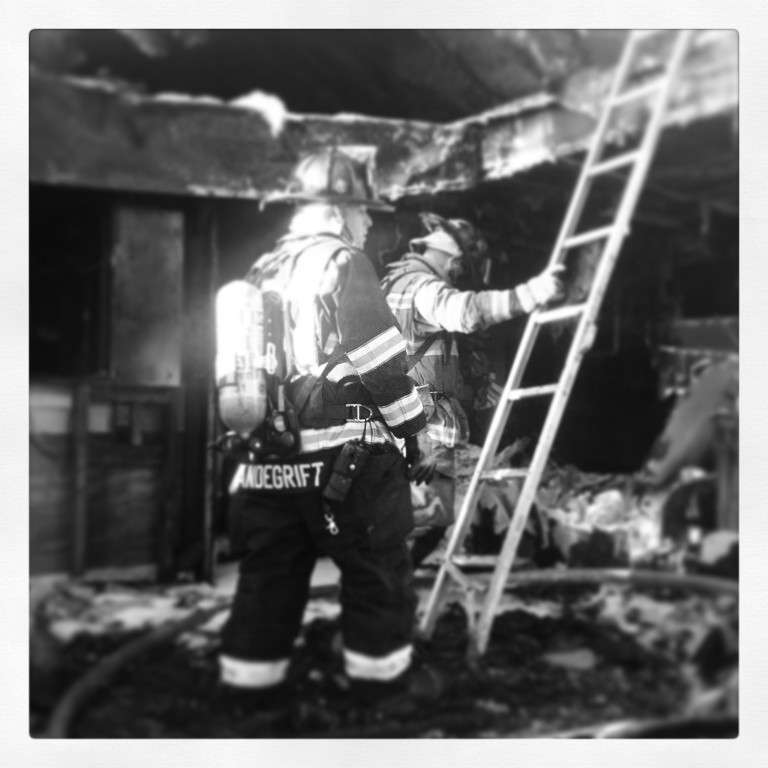 Josh Vandegrift, left, a Cocoa firefighter and paramedic, puts out hotspots after a trailer fire. The photo was taken before Vandegrift was diagnosed with PTSD after responding to an accident where his brother died in 2016. (Photo by Brevard County Fire Chief Schollmeyer)

Josh Vandegrift was just starting a 24-hour shift for the Cocoa Fire Department on Florida’s Space Coast when the call came in: A pedestrian had been hit by a vehicle about 100 yards from the station where he worked.

Vandegrift and other firefighter paramedics responded by ambulance, and Vandegrift cleared bystanders out of the way.

“I looked down and I saw my brother’s face on the patient,” he said.

Nate Vandegrift, his younger brother, had been hit by a commercial van crossing the street. Josh Vandegrift reverted back to his training and began to treat his brother. Then he was removed from the scene by police officers. “I remember just absolutely losing it in the middle of the road.”

Nate Vandegrift died July 30, 2016, about eight hours after the accident. Since then, Josh Vandegrift has had nightmares and flashbacks. He avoids the intersection if possible.

This article was produced in partnership with WMFE, which is a member of the ProPublica Local Reporting Network.

Doctors diagnosed Vandegrift with post-traumatic stress disorder, which is characterized by reliving an event through flashbacks and nightmares, and he began having trouble at home and at work. He took his sick time and vacation time, and when that ran out, coworkers donated their sick time to him. When that ran out, in August 2016, he applied for workers’ compensation.

A few weeks later, he got a letter from the Florida Department of Financial Services, which administers the state’s workers’ compensation system, denying his claim for lost wages. The reason cited: “Per Florida statute, medical benefits only are payable for a mental or nervous injury.”

“I had to go back to work or resign, basically,” said Vandegrift, who returned to work. “I have good days, and I have really bad days, and everything in between. Every day, I walk through a different part of hell and have to figure out how to navigate it.”

Right now, Florida first responders can get medical coverage under workers’ comp if they get PTSD on the job, but not lost wages. About a third of states have similar laws.

But that’s about to change. The Florida Senate approved a bill on Saturday that would cover lost wages for first responders with PTSD, and the House followed suit on Monday.

“I intend to sign it as soon it makes it to my desk,” Scott said, speaking at an event to honor firefighters who died in the line of duty last year. “What this will do is ensure firefighters suffering from PTSD can receive workers’ comp benefits.”

“This benefit is needed so we ensure that our firefighters don’t have this as their only option, our first responders don’t look to suicide as the outlet to sort through the demons they deal with and these horrific images,” Patronis said.

Changing the law has not been easy. Legislation was introduced after the Pulse nightclub shooting in Orlando in June 2016. The shooting left 49 people dead. At least three first responders to the shooting have publicly disclosed that they have a PTSD diagnosis.

But the bill languished in Florida’s Republican-dominated legislature last year, and a related measure’s prospects were uncertain this year. After the Feb. 14 high school shooting in Parkland, in which 17 people died, the bill’s main opposition backed off.

The Florida League of Cities had been against the bill, raising concerns about the costs to local governments that pay for police and fire departments. But the league dropped its opposition after the Parkland shooting.

Gerry Realin, a former Orlando Police Department officer, was the first to publicly disclose a PTSD diagnosis after Pulse. He spent hours inside Pulse, preparing the 49 dead to be transported.

During the final vote in the Florida House on Monday, Realin was watching from the gallery. He was given a standing ovation by lawmakers. He said it was a new feeling. “It was the first time it seemed like our leaders were backing me up,” Realin said.

Realin said other first responders dealing with PTSD have reached out to him for guidance.

“Some of them recently, I told them to just hold on because I think change is coming,” Realin said.

Before the final floor vote, Florida Rep. Matt Willhite, a Democrat from Palm Beach, looked up to the gallery where Linda Benoway was watching. Willhite told her he was sorry.

Her son Stevie LaDue, 55, committed suicide in September. Before his retirement after 30 years as a Tampa firefighter, he tried to get workers’ comp because of PTSD. When the state denied his claim, he had to go back to work and pay back the time he missed.

“Why I say I’m sorry to you is because the system failed you, and prior to today, we failed you,” Willhite said. “Your son, this may have saved his life.”

The bill comes too late for Vandegrift, one of dozens of first responders who have answered WMFE and ProPublica’s request to hear from first responders suffering from PTSD. The legislation will cover people who make a workers’ comp claim after October 1, 2018, as long as the triggering event was within the prior year.

That means Parkland first responders could be covered, but responders to the Pulse nightclub shooting would not. Vandegrift said he knew before he started advocating for the law that it likely wouldn’t apply to him.

“If anything happens in the future, something is in place now so nobody will have to go through what I went through and what Gerry [Realin] went through, just trying to get help to be better,” Vandegrift said. “You know, to be able to get out of bed in the morning.”

Abe Aboraya covers health care for WMFE, an NPR affiliate in Orlando. This year, he is focusing on the toll post-traumatic stress disorder takes on first responders. Email him at wmfe@propublica.org and follow him on Twitter @wmfehealthnerd.