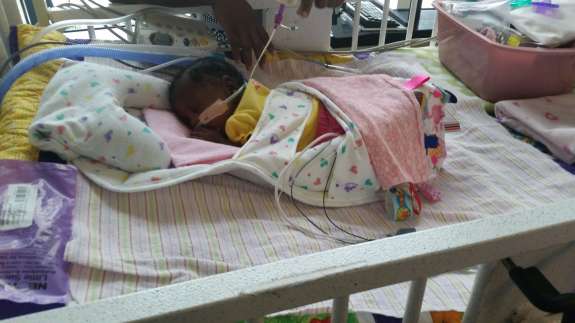 Serenity Jenkins was born prematurely on February first. She was given donated breast milk as part of her treatment at Winnie Palmer Hospital.

One in eight babies is born prematurely every year in Florida. Breast milk helps newborns build up their immune systems and fight infection. Some call it “liquid gold.” But many mothers of premature babies can’t produce their own breast milk. That’s why hospitals turn to milk banks for donor milk much like they rely on blood banks. Florida doesn’t have a milk bank, but that’s about to change.

Baby Serenity is laying on her tummy in a tiny white crib in Orlando’s Winnie Palmer Hospital For Women & Babies’ neonatal intensive care unit or NICU. She’s wearing a bright yellow shirt and pink pants and she’s not much bigger than a football. A nurse is rubbing Serenity’s back as it heaves up and down with her little breaths. Serenity was born three months early on February first. She weighed one pound.

Serenity has a chronic lung disease and a heart condition. Premature babies are also at high risk of necrotizing enterocolitis, a life threatening disease of the intestines. Jenkins says she couldn’t produce her own milk for Serenity so she agreed to give her daughter donated breast milk.

“Because she was born so early the production of my milk wasn’t ready yet so they did explain to me for donors breast milk the process of it, how it was done and of course the benefits for her to have breast milk until my milk production came in properly,” said Jenkins.

Some moms can’t supply their own breast milk because they themselves are ill, stressed or on medications. Right now the hospital has to order processed donor milk from a milk bank all the way in Denver. It’s shipped here overnight in packages with dry ice.

Who donates this human milk? People like Jessica Realin who have enough for their own baby and then some. About three years ago Realin and her son, who was also born prematurely, were getting ready to be discharged from the hospital. She says a lactation worker told her she still had lots of extra milk.

“And I said really, well how much milk are we talking about? And we had become very friendly and so they kind of laughed and they said let’s just go show you, so they walked me over to a freezer and I had the entire freezer full of milk,” said Realin.

Realin donated it and that’s how she found out Florida didn’t have its own milk bank. Orlando does have milk depots but all they do is collect the milk. They ship it out of state to get processed and then order it back. Soon that whole process will be streamlined and handled within the state of Florida.

There are only 15 human milk banks in the U.S. Number 16 is about to open right here in Central Florida. It’ll be the first one in the state. Realin is now the outreach coordinator for the Mothers’ Milk Bank of Florida. Orlando’s milk bank has been busy screening donors and collecting milk.

Director Karen Kesler said the milk lab has been five years in the making. The lab is where the donated milk is processed. There’s a sanitizing dishwasher, a fridge, and machine to analyze milk content- how much fat, lactose and protein it has.

“It’s a lab, yup! We keep everything very clean, we wipe everything down before we start processing the milk,” said Kesler.

Starting next month, this milk will be distributed to the NICU units at Winnie Palmer and Florida Hospital and eventually to hospitals across the state. These hospitals won’t have to rely on orders from out-of-state milk banks. Babies like Serenity will grow and thrive. Jenkins says her and her husband are really appreciative of the donated breast milk.

“Just from seeing her develop she has come a mighty long way, she’s strong and like I said she’s definitely a fighter,” said Jenkins. Starting next month other premature babies fighting their own health battles will have a little extra help.

The grand opening for the Mothers’ Milk Bank of Florida is June 11.