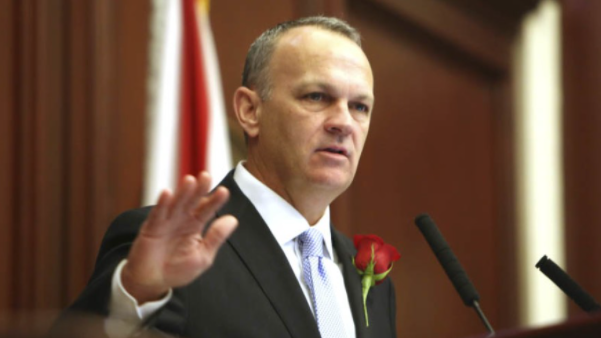 Florida Education Commissioner Richard Corcoran received a letter from the Biden administration that said the state's plan to use federal money to give teachers bonuses may conflict with guidelines on how that money is to be used. (photo: Wikimedia Commons)

Under the American Rescue Plan, education relief funds must help address student learning loss brought on by the pandemic through “evidence-based interventions.”

The letter stated that Florida’s plan to distribute $1,000 teacher bonuses appears to conflict with those federal requirements.

“The U.S. Department of Education has said that there are certain guidelines that have to be followed when using these federal stimulus dollars in our schools,” said Andrew Spar, president of the Florida Education Association.

“And it could be for the additional work that our teachers and staff have done, but it has to be followed in the right procedure. They have to use the right funds, they have to make sure they’re spending it the right way, it has to be geared towards making sure students are learning.”

The federal criticism could interrupt the state’s plan to spend nearly $216 million on bonuses for about 180,000 full-time teachers and 3,600 principals.

Gov. Ron DeSantis made the bonuses one of his highest budget priorities during the recent legislative session.

According to the governor’s office, the Florida Department of Education is reviewing the letter. It’s unclear whether there will be any repercussions.

“It is surprising that the U.S. Department of Education would suggest that a $1,000 disaster relief payment is not ‘reasonable or necessary’ given the dedication teachers in Florida have shown to keep schools open, allow in-person learning, and recover lost learning the entire school year,” a statement from the governor’s office said.

But critics have scrutinized the way Florida education officials intend to distribute the money.

Instead of providing funds to school districts, the state plans to give checks directly to employees.

“We don’t work for the state, we work for the local school district,” Spar said. “So to say that this money should come from the state is…interesting.”

The federal letter questioned why Florida officials are holding back relief money from districts.

According to the FEA, that process is creating unnecessary delays.

“Not only has it delayed the payments to teachers and to the teachers who qualify, but it has also put a burden on school districts, because they were told to quickly turn around and give the Department of Education a list of all the qualifying teachers so that (they) can issue the check,” Spar said.

The money was intended to reward full-time classroom teachers for keeping schools open during the pandemic.

But teachers who worked through the pandemic and retired or resigned before June 2 will not receive the state’s largesse because of eligibility requirements issued by the governor.

“It is very possible that people who worked the entire school year will not get any of this money,” Spar said.

“Many districts decided to delay the start of the school year, but several did not. So their last day of school was before June 2, which means the teachers who retired on that last day of school — it could have been May 28 or May 31 or June 1 — were not employed on June 2.”

“This goes to show that this was a politically-motivated decision,” Spar said.

“This was not about rewarding the people who did this incredible work in our schools all year, this was about the governor wanting to make a political statement.”

Some school districts, like those in Pinellas and Brevard counties, have moved to include those staff members through district funds.