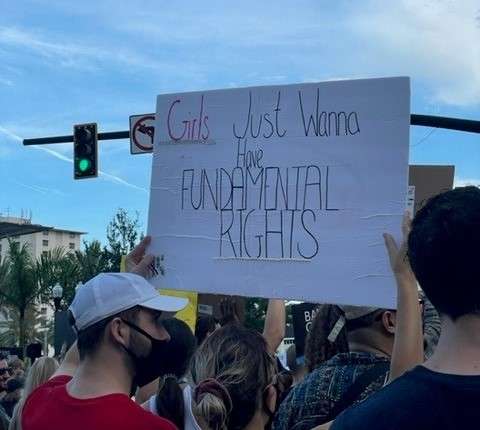 Protestors hold signs and march through downtown Orlando during an abortion rally in June 2022. (photo via Yineth Bolanos)

On Friday, a 15-week abortion ban took effect in Florida. A Florida judge is trying to temporarily block that ban, when he signs a written order this week. WMFE’s Talia Blake spoke with Melanie Guldi, Associate Professor of Economics at the University of Central Florida, about how the ban affects you and the Central Florida economy.

Melanie Guldi is an Associate Professor of Economics at the University of Central Florida.

Abortions performed in the state

According to the Centers for Disease Control and Prevention, in 2019 Florida had 71,914 abortions preformed in the state, with 2,256 preformed to non-residents.

The Florida Agency for Healthcare Administration reports there have been 33,382 abortions in the state so far this year, with 2,372 preformed to non-residents.

The number of abortions per Central Florida county in 2022 so far:

As some states move to a total ban on abortion, people will be traveling to neighboring states to get an abortion. Melanie Guldi, Associate Professor of Economics at UCF, believes people will travel to the sunshine state to get to the procedure, but they likely won’t be coming to Central Florida. “I think most of the women are probably going to come over the state border,” she said. “And it’s probably going to be the northern border. So look to cities, maybe like Tallahassee or Jacksonville.”

When it comes to the number of people who may drive to Florida for an abortion, Guldi said the further a person has to travel to get an abortion reduces the likelihood that they will seek one. “Based on numbers in 2019, I found an estimate of maybe just under 7000, women might come to Florida,” she said. “And that’s not Central Florida, that’s all of Florida, we might expect a little bit of an increase in the demand for abortions in Florida.”

According to the Guttmacher Institute, in 2014 the average cost for an abortion in the first trimester in the U.S. was $508. For an abortion during the second trimester, it was $1195. And then for a later term abortion, it can cost 3000 or higher.

To give these numbers more context, Guldi said “the cost to abortion, it’s monetary, but there’s also a time cost involved. With that in mind, Florida has currently a 24 hour waiting period. So, there’s also a cost of having to go to one appointment, and then you can’t have the abortion before 24 hours after that first appointment.”

Researchers at Advancing New Standards in Reproductive Health (ANSIRH), based at the University of California San Francisco, conducted a study looking at the effects of unwanted pregnancy on women’s lives. It’s called the Turn Away study, and Guldi said it’s the best indicator of potential long-term effect of Florida’s 15-week abortion ban.

“These researchers took samples of women. And they looked at women that were just above by a day or two versus just below the gestational cut offs. And then they compare the outcomes of these women,” she explained. “And one of the things that comes out of that study is that the women who were turned away and ended up having the babies were worse off financially than the women who were able to better time their pregnancies. So, in some sense, abortion is about control. It might be control of whether or not you have a baby, but also might be when do you have the baby.”