Florida Woman Gets OK To Keep Rambo, Her Clothes-Wearing Gator 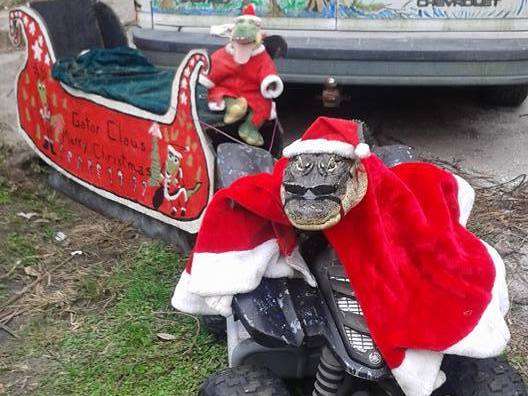 Rambo the alligator often wears clothes — partly because he's very sensitive to sunlight, according to his owner, Mary Thorn.

A Florida woman who petitioned the state for permission to keep her trained gator has received official approval — just in time for Christmas.

Mary Thorn of Lakeland, Fla., has been caring for Rambo for more than a decade, The Ledger newspaper reports. Rambo wears clothes and rides motorcycles and ATVs.

But at 5 feet 8 inches, Rambo has grown large enough that the Florida Fish and Wildlife Conservation Commission was concerned that he didn’t have enough space in Thorn’s house.

Thorn trained Rambo and ran a business where he appeared at parties and other events. Social media is full of images of people holding and cuddling Rambo, who appears in a wide range of outfits.

News that Rambo might be separated from Thorn prompted online petitions and declarations of support.

Now, the two will be able to stay together. But the public appearances will have to stop, under her new agreement with the state of Florida. Thorn will also have to cage him and tape his mouth shut any time he leaves her house — no more going for unfettered motorcycle rides.

She says it’s too bad he won’t be allowed to perform any more.

“He loves being around people and taking pictures with people,” she told The Ledger. “He loves to be social.”

There’s another requirement that bothers her — the fact that her agreement with the state calls for her to get a “pet license.”

“I don’t want people thinking they can have alligators for pets,” she said, according to the Ledger.

She told the newspaper she considers Rambo family, and explained that he was a rescue animal who entered her life after a plastic tub was dropped off at a wrestling school she ran:

“Inside, she found five alligators in a pool of shallow water, packed so tightly together that all they could do was rock side to side on their malnourished limbs. One of the alligators died that day, followed by three of the others over the next five years that she had tried to keep alive.

“Rambo is the lone survivor.

“She is worried that if people start considering alligators pets, the same thing that happened to Rambo and the others will happen to more alligators.”

Rambo is something of a celebrity in Lakeland — famous for his outfits, which change with the seasons. One recurring getup is Christmas-themed — with a red and white hat, of course, and an alligator-sized cape.

Thorn says the clothes help prevent sunburn. She told the Orlando Sentinel that Rambo was kept in the dark for the early years of his life, which left him sensitive to sunlight.

With Rambo barred from public performances, Thorn would have to get a new, smaller alligator to keep her “Country Gator Theater” business running, but she told the Sentinel she has no plans to replace him.

” ‘[Other alligator handlers] would take a gator [longer than 4 feet] to a gator farm to be killed and get a new baby one,’ Thorn said. ‘I don’t understand, because I’ve got a gator that won’t bite and they want me to get another one that would. I just decided to retire.’

“Though things are tight, Thorn she is glad to know she can continue with planning her annual holiday festivities with Rambo and her other critters — she also has five dogs. She said Rambo will enjoy turkey, ham, and his favorite — green beans — at Christmas dinner with her family this weekend.

” ‘All in all it’s going to be a merry Christmas because Rambo is here,’ Thorn said.”