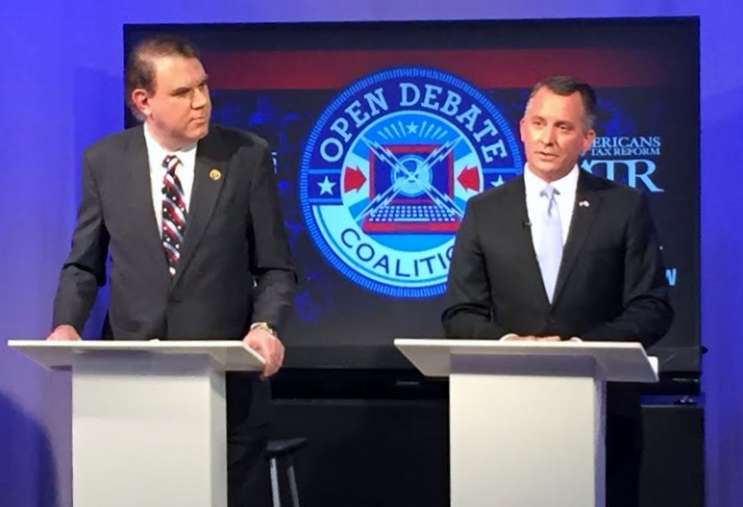 Climate change, women’s rights, and student loan debt are some of the topics evoked in tonight’s first live open debate between candidates for U.S. Senate. Florida candidates and congressmen Alan Grayson, a democrat, and David Jolly, a republican, clashed first over the economy and social security.

“We don’t need cuts,” said Grayson. “Cuts are hurting seniors who are desperately needing these benefits.”

Jolly said the system needs an overhaul that would guarantee workers who have already paid into Social Security and Medicare access to benefits.

“It might look different from what it is today,” he said for new and future workers.

Grayson and Jolly disagreed about women’s rights with Jolly citing a need to “create a culture that values life” and with Grayson indicating without hesitation that he would back Planned Parenthood in its pro-choice efforts.

With this live open debate format, the candidates answered questions submitted and voted on by people across the country. Questions included,

“What can be done to reduce voter suppression?” and “Should Americans have the same health and retirement benefits as members of Congress?”

This question from a woman in Rhode Island received thousands of votes:

“Do you accept that climate change is the single greatest threat our world faces?”

While both candidates agreed that there is evidence of climate change, they differed in their opinions of how serious it may be for Floridians.

“I can’t think of anything else that could literally destroy the planet other than climate change,” responded Grayson.

Jolly’s acknowledgement of climate change stands out among his republican counterparts, including Florida governor Rick Scott, who have denied its evidence as environmentalists across the state urge elected officials to consider its gravity. They say increasing sea levels and the eradication of species are evidence of the phenomenon.

Jolly insisted that long-term research, not legislation, is the best solution. The congressman prefers to focus policies on what he considers an immediate threat: terrorism.

Grayson and Jolly found common ground over the state’s closed presidential primary. Jolly said it is one way the Republican party is missing out on ways to expand its voter base.

“We can grow the party by embracing conservative solutions that appeal to independents and those who are no party affiliations,” he added.

Grayson agreed an open primary is only fair. But he took it one step further, urging automatic rights restoration for some formerly convicted felons.

“We have to accept the fundamental idea that it is fundamentally wrong for the government to do anything to frustrate the right to vote,” he said.

Jolly did not comment on rights restoration during the live debate. However, when asked about Florida’s voter ID laws he said he would consider any policies that made it easier for residents to vote.

Florida is home to the nation’s largest number of disenfranchised voters according to The Sentencing Project, a voter advocacy group.

The candidates covered student loan debt, the minimum wage, and workers rights during the 75-minute debate. It was the Open Debate Coalition’s first chance working with U.S. Senate candidates. Organizers hope to expand the model to presidential debates.