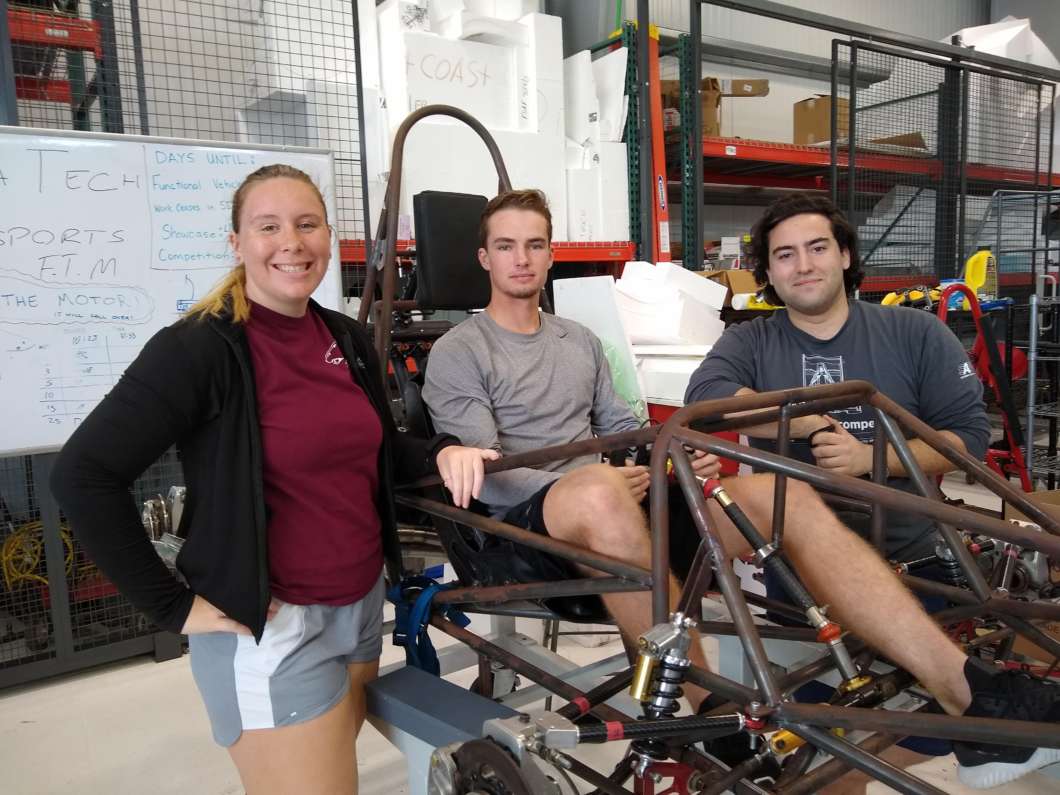 Undergraduate students at Florida Tech are getting the chance to solve real world engineering and science problems at the Harris Student Design Center at the university’s Melbourne campus. The experience aims to give students a leg-up when joining the job market.

More than a dozen students are hard at work in the warehouse-like building on Florida Tech’s campus. One student traces a giant schematic on the floor, another tinkers with motors and gears on a tiny robot.

Every student graduating from Florida Tech is required to complete a capstone project — something that encompasses a little bit of everything they’ve learning during four years of undergraduate work.

“This is one of the spaces we have on campus for such a project in which we teach them how to use some of the equipment we have here, teach them some new techniques they might use and give them space and important resources to complete their project,” said Juan Avendano, director of Student Projects.

So where do these ideas come from? Many of the projects stem from real problems from real companies and the students have to come up with a solution.

“Maybe 40 percent of our projects are industry based in which companies such as ULA, Lockheed Martin, Northrop Grumman come to us with a problem or idea,” said Avendano. “Then we task a particular team of undergraduate engineers to solve these problems or try this idea.”

That’s what brings United Launch Alliance’s Tory Bruno to the design center. His company launches rockets for the military, commercial sector and NASA, and he’s checking in with some of the students as they solve some of his company’s challenges — like developing a test device for ULA’s future rocket Vulcan.

As Bruno talks with students and plays with some of the equipment, he is impressed by the work. “This is fantastic; I’m having so much fun. These kids are so bright and they are so articulate, and the projects they are working on are so meaningful — some of them are for us that we’ll use on our launch pad.”

It’s not all about rockets. Another group of students is working on a race car.

“Our project is to design, build and test a formula-style vehicle for your average, non-professional weekend autocross racer,” said Emily York, the Team Lead for the Formula Panther project.

The team will test their vehicle in a competition in May, which includes testing everything from the design to the engineering of the car, which can go up to 90 miles an hour.

More than 20 seniors are working on this project across different engineering disciplines. “There’s not too many other places that offer an experience like this,” said Curtis Thies, a mechanical engineering student, “especially working with a big team and working with so many people. The communication level, the planning ahead and then the hands-on experience — this project is really unique in that way.”

That’s the draw to this program, according to Avendano. The experience has helped his former students get jobs in the industry – especially during the interview process when they get the common question about solving a problem and how they fixed it.

“It’s much more significant and when it’s something like ‘I was building a supersonic jet and this went wrong, and this is how I fixed it and it worked at the end.’ It’s much more impressive,” he said.

As ULA’s Tory Bruno finishes his tour of the design center, the students put their heads down and get back to work, ignoring the entourage of rocket executives and news media following along.

Some are solving some of ULA’s design challenges, other may one day work for the rocket company. But before they can hand in their resumes to Bruno, they’ve got to get through this senior design before donning their cap and gown at graduation.