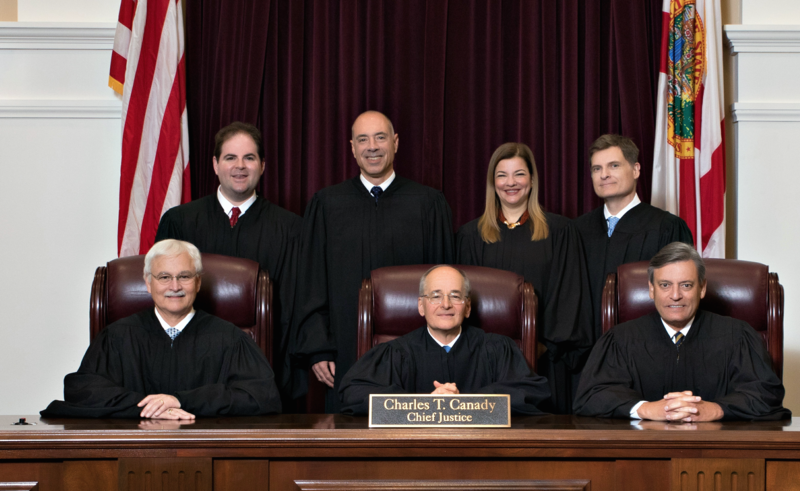 The Florida Supreme Court on Wednesday heard oral arguments for a nationally watched question about how the state’s 2018 ballot item Amendment 4, relating to the restoration of voting rights for people convicted of felonies, is being implemented.

In it, Supreme Court Justices appointed by Republican Governor Ron DeSantis sounded deeply skeptical of claims that financial obligations related to felony convictions cannot be considered within the phrase “all terms of a sentence.”

However the Florida Supreme Court comes down on that question could have broad implications on the right of hundreds of thousands of Floridians’ right to vote in upcoming elections.

Anton Marino, an attorney for the American Civil Liberties Union of Florida, argued that the intention of Amendment 4 was to automatically restore voting rights for people with felony convictions after they finished any prison sentence, along with parole and probation. The Amendment passed statewide with about 65 percent of the vote.

“What the legislature may not do is nullify the entire purpose of the amendment,” said Marino, referencing state law SB 7077 that was passed after Amendment 4. The state law explicitly tied money to the right to vote, while Amendment 4 largely left the question up to interpretation.

Lagoa cited an exchange before the Florida Supreme Court in 2017 in which the head attorney and co-author for Amendment 4 Jon Mills stated that fines and fees would be included in “all terms of a sentence.”

“We were told that here, and voters were also told that in different editorials and opinion pieces throughout the state” in the lead-up to the 2018 election, she said.

Lagoa and Justice Carlos Muñiz, another DeSantis appointee, also cited voting guides that were passed around the state that included language about financial obligations. Muñiz cited a December 2018 letter to the Florida Department of State — of which the ACLU of Florida was a cosigner — that stated as much.

Justice Robert Luck, another DeSantis appointee, took the most nuanced and questioning look at whether court fees in particular could be considered part of a sentence. Court costs and fees are often used to fund government operations, not technically punish a crime, and are often not subject to a judge’s discretion. “How do we define that basket” of things to be included in a sentence? he asked.

Attorneys for DeSantis, the Florida legislature and the Florida Secretary of State took the stance that any terms or conditions included in the sentencing document for a criminal case should be considered part of a sentence.

But Luck pointed to “counter indications” in the state statutes that treat court costs and fees as differently than statutory fines, probation and parole. He said just because costs and fees appear on a sentencing document doesn’t necessarily mean they are part of a sentence.

“Is a cost and a fee a sentence?” he asked DeSantis attorney Joseph Jacquot. “It has to be like [parole and probation]. It can’t be apples and oranges.”

Almost all of the questions asked during the hearing were from DeSantis appointees. Justices Ricky Polston and Alan Lawson, as well as Chief Justice Charles Cannady briefly weighed in.

Much of the discussion revolved around the question of whether the original ballot or the ballot language itself was ambiguous.

Mohammad Jazil, the attorney for Florida Secretary of State Laurel Lee, said that it would “create a conundrum” if the court finds that the ballot was ambiguous, since it allowed Amendment 4 to go to voters in the first place.

Justice Muñiz countered that the Supreme Court only declares that the summary language that appears on the ballot itself is not ambiguous. The underlying language of the ballot can still possibly be ambiguous.

Marino, for the ACLU, argued that if there is ambiguity about what “all terms of a sentence” means in Florida, then the state Supreme Court should rely on how the U.S. Constitution treats the question.

“Should we do that or should it be stricken?” asked Justice Lagoa.

That prospect would put the voting rights movement essentially back to square one in Florida, before Amendment 4 passed.  Going through the Governor and the Clemency Board would be the only way for someone to get their voting rights restored, as it was in the old system.

Marino said that if the court takes the position that financial obligations need to be paid before someone with a felony conviction regains the right to vote, four in five Floridians with felony convictions would be “serving a lifetime sentence.”

Marino asked the court to dismiss the Governor’s request for an advisory opinion, but Luck seemed to shoot that down, saying the state government is simply seeking advice on how to control its voter rolls.

Governor Ron DeSantis asked the court for the non-binding advisory opinion in lieu of a parallel federal lawsuit that is exploring many of the same issues.

Though the two cases are technically separate, they are deeply intertwined in that they are looking at separate aspects of the same question.

“The Florida Supreme Court will soon decide whether ‘all terms of sentence’ means not only terms of imprisonment and supervision but also fines, restitution, and other financial obligations imposed as part of a sentence,” U.S. District Judge Robert Hinkle wrote in a legal filing last month.

That question is being left up to the state Supreme Court.

It’s not known when the Florida Supreme Court will issue an advisory opinion, or if it will dismiss the request for the opinion altogether. A trial for the federal lawsuit is scheduled for April 2020.