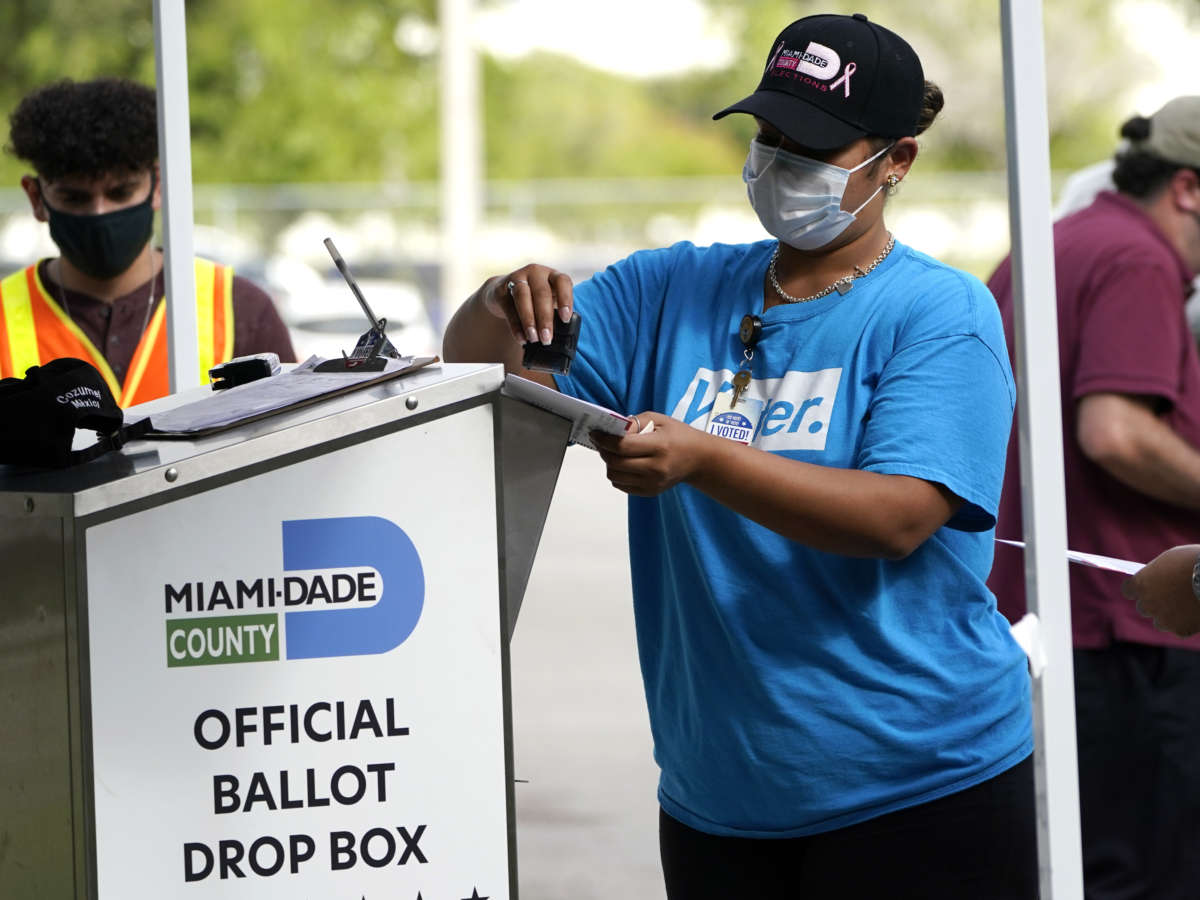 An election worker stamps a vote-by-mail ballot dropped off by a voter before placing it in an official ballot drop box at the Miami-Dade County Board of Elections in Doral, Fla., in October 2020. The Florida state Senate on Monday passed a bill that would reduce access to drop boxes.
Image credit: Lynne Sladky

The Florida state Senate on Monday approved tighter vote-by-mail regulations in a bill that in recent days was made less stringent after neighboring Georgia’s new voting restrictions elicited widespread condemnation.

A stronger version of the Florida legislation is still under consideration in the state’s House of Representatives. The two chambers must approve an identical measure for it to reach Republican Gov. Ron DeSantis’ desk for signature. Florida’s legislative session is scheduled to end Friday.

SB 90 passed on a near party-line vote of 23-17, with one Republican joining all Democrats in opposition.

Among other changes to Florida voting laws, the bill would put an end to 24/7 ballot drop boxes; they would have to be monitored in-person by an elections official and would only accept ballots during early voting hours. Those who wanted to vote by mail would have to request a mail ballot every election cycle, rather than every two, as under current law. And no one but an election worker could distribute items, including food and beverages, within 150 feet of polls or drop boxes.

Tighter rules on voting are a major legislative priority of DeSantis, a close ally of former President Donald Trump. DeSantis, like much of the Republican Party, has refused to condemn Trump’s false claims of voter fraud in the 2020 presidential election. Republican-led state legislatures across the country are considering a broad range of restrictions on voting access, in particular for voting by mail, which surged during the pandemic.

Florida Democrats condemned the Senate measure as yet another example of historic efforts to restrict voting by African Americans.

“Since voting is a right, why would we, as a state, attempt to reduce the right of a person to exercise their right to vote and in the manner in which they decide to vote?” said Democratic state Sen. Audrey Gibson during debate of the bill, according to News Service of Florida. “We may not have to take a test, count bubbles or marbles or any other such nonsense, but this bill is tantamount to the same thing.”

The legislation would also require voters to provide a Florida driver’s license number, state identification number or the last four digits of a Social Security number when requesting a mail-in ballot or changing party affiliation. Democrats said that would unduly burden low-income African American and Hispanic voters, who are less likely to have such documentation than white voters.

Republicans, who had touted the success of last year’s elections in Florida, defended the changes as modest and commonsense.

Florida’s legislature has not hesitated to roll back voting rights in the past.

In 2018, Florida voters approved by nearly 2-1 a constitutional amendment restoring voting rights to felons who had completed the terms of their sentence. The following year DeSantis signed into law a measure that prohibited the restoration of voting rights to felons who still owed fines or other financial obligations as part of their sentences, even if they could not afford to pay.

The law, challenged in federal court, was upheld by the 11th U.S. Circuit Court of Appeals two months before the 2020 election.