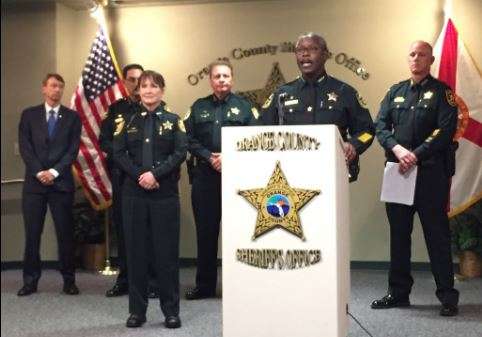 The Department of Homeland Security has suspended its weekly report singling out law enforcement agencies in Florida and other parts of the United States as “non cooperative” for failing to enforce immigration policy. In the meantime, sheriffs across Florida are devising a plan to collaborate with the federal agency’s immigration arm, Immigration & Customs Enforcement (ICE) without violating the law.

Earlier this month ICE suspended its list following a wave of press conferences across the country, including in Orlando. At it, members of the Florida Sheriffs Association said the federal agency was asking them to detain people without probable cause, and labeling them as non cooperative for not doing so.

In a statement, ICE explained the suspension of the list saying the agency “is committed to publishing the most accurate information available […] and continues to analyze and refine its reporting methodologies.”

Alachua County appeared on the list several times, along with Marion and St. Lucie counties. Alachua County Sheriff Sadie Darnell said she did not know what the criteria for being on the lists were. She called them misleading, adding that ICE was asking local law enforcement to violate people’s civil rights and the federal constitution.

“We have helped to clarify that there has been some misunderstanding  and some confusion between civil immigration law and Florida criminal law, and it’s up to the federal entities to sort it out and we’re willing to work with them,” she told WMFE in a phone interview.

Darnell said Florida sheriffs were meeting to talk about ways to collaborate with ICE and that they were not sure whether its weekly lists would be reinstated. That question still lingers, though ICE in a written statement said it is important for local and federal agencies to collaborate to keep noncitizens who commit crimes from continuing to do so.

Pinellas County Sheriff Bob Gualtieri of the Florida Sheriff’s Association said just how collaboration looks is unclear when at least nine courts have ruled that local law agencies do no have the right to enforce federal immigration policy.