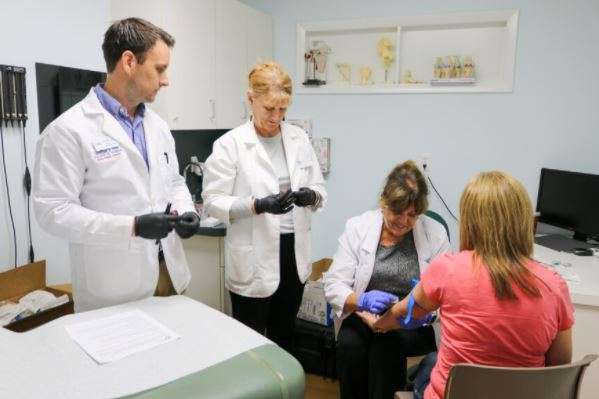 Florida researchers collecting blood samples to look for algae toxins and build a data bank. Shirley Gordon is the second from the left. (Photograph Courtesy Volunteers In Medicine / Courtesy)

Observing for long-term health effects of algae will take between five and 10 years of studying. And now, during the pandemic, a new question has come up.

Florida researchers are working to determine the impact harmful algal blooms have on human health.

The study is primarily focusing on Cape Coral, Stuart, and areas around Lake Okeechobee.

It’s funded by the Florida Department of Health, which has granted nearly $320,000 this year.

For the past three years, Florida Atlantic University scientists and partners have been studying levels of toxins in the blood, urine and nasal swabs of people who live or work near red tide and blue green algae blooms.

Shirley Gordon, professor at FAU’s College of Nursing, said they have more than 100 people in the study, and are recruiting 50 more.

“So, in addition to the samples that we’re taking for immediate testing, we will also be banking samples,” she said.

“For example, if our technology for detecting the presence and level of toxin in human tissues improves, we’ll be able to go back and test samples over time.”

And that data will then be made available to researchers around the state.

Gordon said observing for long-term health effects will take between five and 10 years of studying.

And now, during the pandemic, a new question has come up.

“We know that people that have underlying lung disease, for example, chronic obstructive pulmonary disease, asthma, are more susceptible to the respiratory irritation related to these toxins,” she said. “So, is the same true for persons that have had COVID-19?”

One of the goals, Gordon said, is to reassure people if the study shows algae toxins do not create long-term health effects.

But if they do, she said scientists should monitor for those symptoms moving forward.